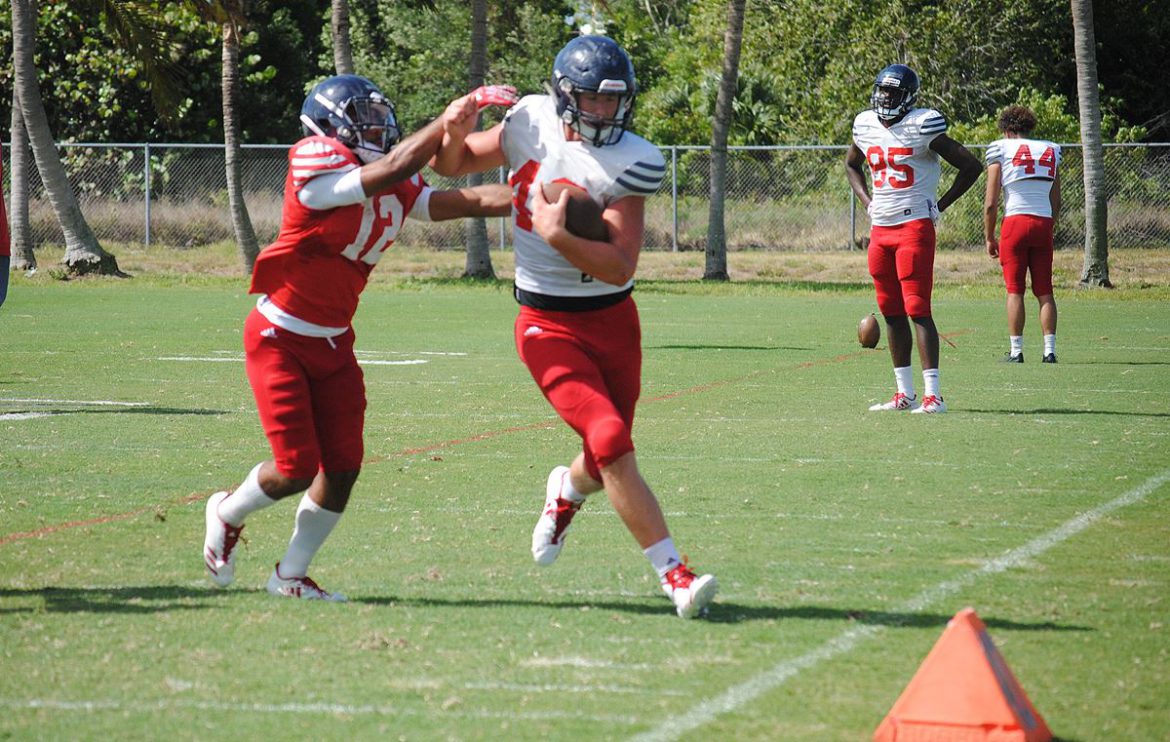 Harrison Bryant is pushed out of bounds following a catch in Tuesday's practice. (OwlAccess.com photo)

BOCA RATON – FAU boasts an explosive, big-play passing game, but its most dependable player is one who may not be as flashy as his counterparts.

Coach Lane Kiffin focused on analytics this offseason, and found that tight end Harrison Bryant has been his most consistent pass catcher. Kiffin said the data he analyzed showed Bryant had an extremely high catch percentage on his targets.

Kiffin said having Bryant as a safety valve for his quarterbacks is vital in preventing turnovers, and that his work down the middle of the field acts as a stabilizer for the passing game.

The short and intermediate game is Bryant’s specialty; he is adept at finding the soft spots in zone coverage and beats man coverage by using his six-foot-five frame to box out smaller defenders and make plays in traffic.

Bryant appreciated his coach’s praise, but wants to be known for more than his receiving acumen. Bryant said blocking is one of the most underrated aspects of his game. Bryant’s work maintaining leverage and creating holes in FAU’s zone blocking scheme is one of the reasons Devin Singletary has been one of the most successful rushers in college football.

“I just try to do whatever I can to help the offense succeed whenever my number is called: blocking, running routes, pass protection, whatever,” Bryant said. “I do I just try to do it to the best of my ability.”

With a new-look receiver group in the fold this spring, Bryant has taken on a bigger chunk of the target share. Bryant acknowledged his role increased “to an extent” but said the receivers made plays when given opportunities. Regardless of how the receivers progress, if Kiffin needs someone to move the chains and score in the red zone, there is no one better than number 40.

Bryant is already gaining the trust of quarterbacks De’Andre Johnson and Chris Robison. He’s playing a bit of catch-up there, however. Bryant broke his football in FAU’s win over FIU in last season’s Shula Bowl. He wasn’t fully cleared to return to action until shortly before the start of spring practices.

Kiffin deployed Bryant in multiple looks this spring, ranging from a traditional inline position, to H-back – even split out wide and in the slot. Wherever Bryant lines up, if the ball is thrown his way, good things tend to happen.

The Owls have also worked on getting Bryant on the field with John Raine in two-tight end personnel; giving FAU the luxury of extra blocking for Singletary in the run game, and two big targets in the passing game.

While he doesn’t possess game-breaking speed, Bryant is a technician at his craft; his crisp route running skills and sure hands are crucial to FAU’s offensive success.

“Whenever my number is called I just try to make a play.” Bryant said. 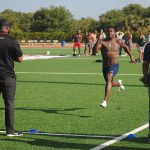 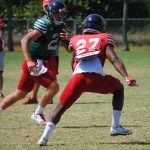