Cody Wilson is developing a knack for the big home run.

His solo blast to left capped a five-run eighth and gave FAU the lead for good in a 14-10 victory over Rice in Houston.

Reliever Matt Harris drew the emergency start in place of Jake Miednik, who was scratched from his scheduled start because of shoulder tightness. His availability for the remainder of the weekend is uncertain.

Harris didn’t make it out of the second inning. Leading 2-0 after one, FAU surrendered six runs to Rice in the second. FAU chipped away at the lead scoring two in the third and another in the fourth before tying the game on a Tyler Frank RBI double in the fifth.

It didn’t stay tied long. Rice promptly added three more runs in the bottom of the inning, once again taking what appeared to be a comfortable lead.

Pedro Pages’ two-run homer was the big blow in a three-run ninth that sealed the victory for FAU.

Up Next: FAU and Rice play the middle game of the weekend series on Saturday. First pitch is scheduled for 2 p.m. 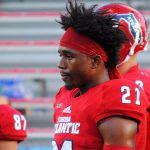 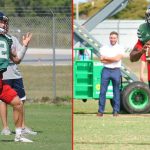