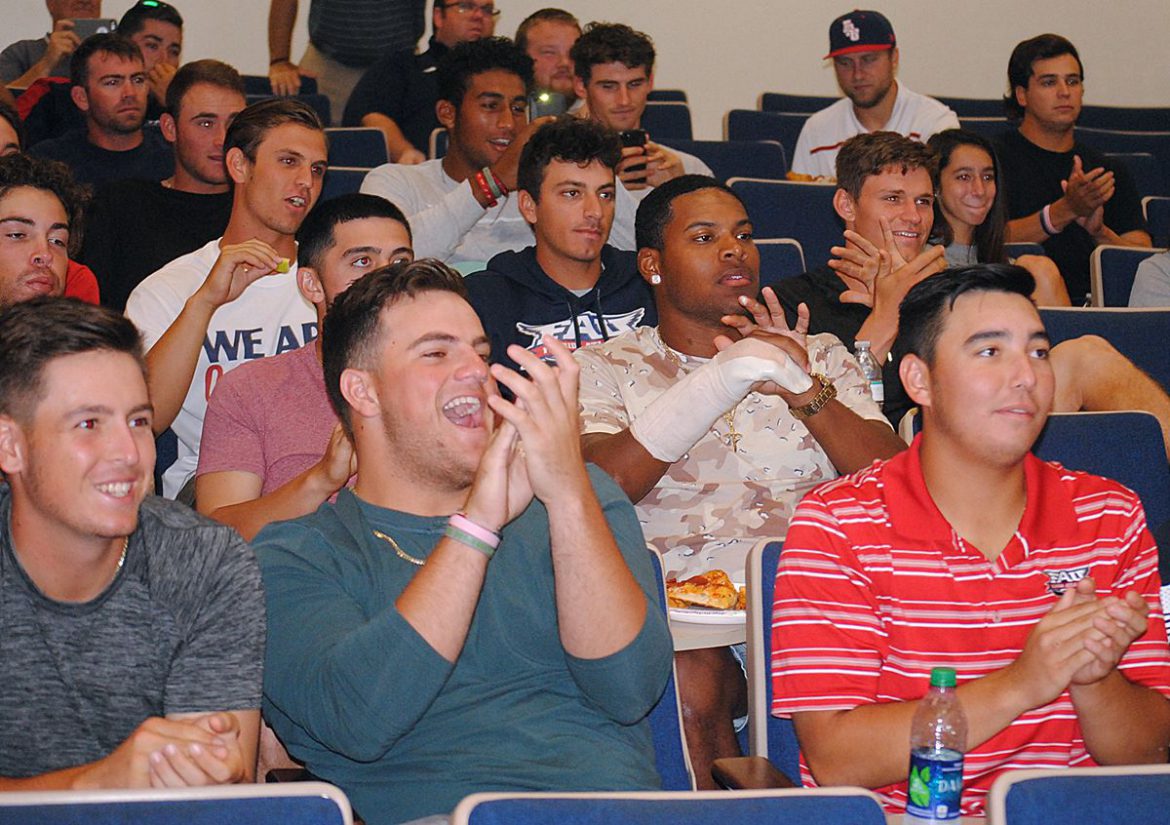 FAU players react to the announcement that the Owls will be the No. 3 seed in the 2018 Gainesville regional. (OwlAccess.com photo)

BOCA RATON – The reaction wasn’t as much a roar of approval as it was an enthusiastic golf clap.

FAU players and coaches expected to see the Owls in the NCAA tournament, the only questions being where they’d play, what they’re seeding would be and who’d they’d be playing.

The answers to those questions, revealed Monday by the NCAA, is the Gainesville regional as a No. 3 seed, with No. 2 seed Jacksonville being the first round opponent on Friday.

“I think we kind of knew we were going there,” shortstop Tyler Frank said. “We had a feeling. It was kind of an expected outcome.”

Expected, but still a tad disappointing.

“We’re used to it by now,” FAU coach John McCormack said. “The way the NCAA works, everything is regional.”

The reasons for FAU’s lack of enthusiasm at their assignment are threefold.

It started with a lack of sleep. FAU bused back from Biloxi, Miss., following Sunday’s 12-3 loss to No. 17 Southern Miss in the Conference USA tournament championship game – arriving in Boca Raton after sunrise.

The seeding was also a bit of a slight. The victory that put FAU in the C-USA title game gave the Owls 40 on the season. Many believed that would be enough to earn a No. 2 seed.

Finally, Gainsville is second only to Coral Gables when it comes to where FAU baseball seasons go to die. Twice before the NCAA assigned FAU to the Gainesville regional. The Owls have never escaped. In fact, FAU has never beaten Florida in postseason play.

FAU last played in Gainesville in 2015, reaching the final before losing to Florida.

“I think sometimes there’s a little bit of a bump [playing somewhere different] because, Hey man, we’ve never been here before, this is kind of neat, but it’s good to be in Gainesville,” McCormack said.

Defeating thhe Gators this year won’t be an easier. The NCAA assigned Florida the No. 1 seed in the field of 64. The Owls and Gators met one time this season, with Florida prevailing 6-2 back in February.

To get to Florida (42-17-0) FAU will have to go through Jacksonville (39-19-0), the runner-up in the Atlantic Sun Conference, of which FAU is a former member. The Dolphins ended the season with an RPI of 21, 12 spots higher than FAU, and handed Florida one of its 17 losses on the season. That game is scheduled for 6:30 p.m. on Friday.

FAU will be making its 11th NCAA tournament appearance, fifth under coach John McCormack. Only once in program history, in 2002, have the Owls advanced to a super regional. FAU won the Tuscaloosa regional that year.

Conference champion Southern Miss is the only other Conference USA member in the NCAA tournament. The Golden Eagles, winner of C-USA’s automatic bid, are the No. 2 seed in the Fayetteville, Ark., regional.

After failing to make the NCAA tournament last season, McCormack wasn’t worried the Owls would be excluded for a second consecutive season.

“It never crossed my mind that we wouldn’t be in,” McCormack said. 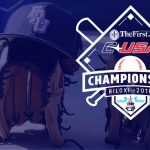 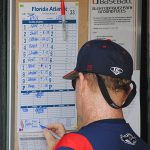