BONUS PHOTO GALLERY: Fan Shots
YET ANOTHER PHOTO GALLERY: Pregame and Game Shots
BOCA RATON – Each Sunday we review the previous day’s game, looking at the positives and negatives of FAU football. Saturday’s 69-31 FAU demolition of North Texas left us plenty of positives to choose from. The Owls set all kinds of offensive records in their homecoming win. Here’s what we saw.

BIGGEST SURPRISE
Chuck King: How quickly FAU put North Texas away. The battle between Conference USA leaders was little more than a skirmish, with the Owls doing pretty much whatever they wanted both offensively and defensively. FAU led 24-0 after 15 minutes of play and didn’t throw a pass during the final 18 minutes. The Owls’ killer instinct keeps showing up earlier and earlier in games.

Matt Wilson: Jason Driskel threw for 357 yards and two scores. After all, he only threw for a combined 434 yards in his first three starts of the season. Driskel showed range on throws, being able hit Willie Wright for a 69-yard score. Driskel has proven he can lead this FAU team. He has shown he can now be a threat both on the run and with the pass.

GAME MVP
King: Expected to be an offensive battle, FAU’s defense never let that happen. The Owls limited Conference USA’s leading offense to 145 total yards in the first half, and shut down the conference’s leading rusher, Jeffery Wilson, holding him to 49 yards. Linebacker Azeez Al-Shaair is the leader of that defense, and he played with a ferocity rarely seen at Howard Schnellenberger Field. Al-Shaair led all players with 14 tackles and was the player of the game.

Wilson: Devin Singletary has shown he may be the third-best running back in the nation behind Penn State’s Saquan Barkley and LSU’s Derrick Guice. He had his fourth straight multi-touchdown game and his fifth-consecutive 100-yard performance. If Singletary is not up there for the Doak Walker Award by the end of the year, he gets robbed. With three touchdown runs as part of a 123-yard day, he is now tied for first in the nation in touchdown runs.

CONTROVERSIAL CALL
King: Those who believe wide receiver Kalib Woods shouldn’t be playing while two felony charges hang over his head shouldn’t direct their ire at Lane Kiffin. It’s the university administration that lifted Woods’ suspension. It’s the university that banned him from campus, then decided he wasn’t a danger to the FAU community. If the heads of FAU say it’s OK for Woods to be a part of their community, why should Kiffin be held to a hire standard? Why should Kiffin go against the wishes of the people who are, at least in theory, above him in the university pecking order? Woods didn’t catch a pass in his first game of the season. Don’t like seeing him out there? Take it up with FAU Vice President for Student Affairs Corey King.

Wilson: FAU elected to give John Franklin more series at QB than former starter Daniel Parr. Though Franklin didn’t through a pass, and it’s unlikely Parr would have if he’d remained in the game, the Owls need to continue to develop Parr in case something happens to Driskel. It’s silly for Franklin to get the second most reps, especially when he is the wildcat QB.

EXTRA POINT
King: For years FAU fans waited, sometimes too patiently, for a winner. Any enthusiasm that germinated from a modicum of success needed to be guarded, knowing full well that something surely would go wrong – because something always went wrong. This year feels different. FAU can win games in many ways. The Owls can run the ball down opponents’ throats. They can force turnovers. And, if Saturday was any indication, they are becoming a threat through the air. The players and coaches have bowl aspirations – and rightly so. In Western Kentucky, Marshall and Louisiana Tech over the next three weeks, and only Marshall (6-1) at home, FAU faces its toughest remaining opponents in short order. This team is talented enough to win the Conference USA title and add a third bowl trophy to the Oxley Center lobby. And they’re playing like it.

Wilson: FAU has been a different team since the loss to Buffalo. Riding three game winning streak, Lane Kiffin eclipsed the Charlie Partridge season record for wins. They are now 4-3 and 3-0 in conference play. FAU looks like the front runners for C-USA champions. They are running well on all cylinders. FAU now owns a C-USA record with 804 total yards in a game. FAU also stopped the top offense in the conference holding 420 yards and most coming at the end of the game. Chris Tooley is doing something we haven’t seen since the days of D’Joun Smith, being on the top of the nation in interceptions. 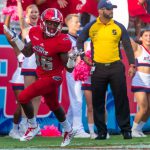 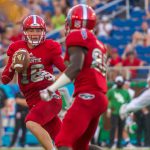