BOCA RATON – In a year where so much has gone wrong for FAU, the Owls finally produced a season full of highlights on Saturday night, blowing out FIU 49-14 in the Shula Bowl.

Given the lead, FAU’s defense responded with its best effort of the season, forcing three turnovers.

As the clock ticked down to zero, FAU players once again raced to claim the Shula Bowl trophy. Parading it around FIU’s field while Owl fans celebrated in an empty stadium.

Each week our Chuck King and Wajih AlBaroudi breakdown the good, the bad and the curious from the previous day’s game with our Four Down Territory analysis. Spoiler Alert: Plenty of good came from FAU’s Shula Bowl victory.

BIGGEST SURPRISE
King: FAU coach Lane Kiffin sticking with Johnson in the second half. With Chris Robison still ailing from an injured ankle, it wasn’t all that surprising that Kiffin gave Johnson a shot. With the element of surprise already exhausted, it would have been easy for Kiffin to go back to Robison in the second half. He elected to stick with Johnson, and the former “Last Chance U” star rewarded him – and the rest of the Owls – handsomely.

AlBaroudi: The Owls’ defense containing FIU’s big plays. Few teams in the country came into last night’s game with a more explosive offense than FIU. One quarter of FIU’s drives resulted in 20-plus yard touchdowns through eight weeks, which ranked No. 1 nationally. FAU would not let that trend continue. The Owls played sound defense and forced FIU to earn every yard it got, giving up only two plays of more than 20 yards with neither of them being scores. It’s easy to forget considering how dynamic FAU’s offense looked last night, but credit should be given to its defensive counterparts for pumping the brakes on an FIU attack which has looked unstoppable at times this season.

GAME MVP
King: Devin Singletary. It’s customary for the media to select an MVP from each team at the end of the Shula Bowl, but it appears as though FIU staffers got lost in the chaos of that late FAU touchdown barrage and forgot to take the poll. It would have been interesting to see who would have won on the FAU side. Johnson jolted the Owls’ offense to life. Singletary, meanwhile, had one of the best games of his career – which is saying something. He rushed for 184 yards and three touchdowns, and generally made the offense move.

AlBaroudi: De’Andre Johnson. After replacing quarterback Chris Robison midway through the second quarter, Johnson provided an instant lift to the FAU offense. He maneuvered the unit with pace and precision, keeping the defense honest with the threat of his legs to help Singletary and Kerrith Whyte both have 150-plus yard games. Johnson had only six pass attempts but made them count, completing four of them for 67 yards and two touchdowns. It couldn’t have been much of a better showing from the former “Last Chance U” star. And it opened the door for another tricky quarterback decision from Kiffin.

CONTROVERSIAL CALL
King: Going for the first down on fourth-and-one from FAU’s own 29 while leading 7-0 in the second quarter. Moments earlier FAU’s defense kept FIU off the board when the Panthers missed a field goal. Four plays later, Kiffin elected to take the kind of gamble that hasn’t worked out well for the Owls this season. FIU stopped Whyte for a loss of one, turning the ball over to the Panthers. Four plays later FIU had its first TD. “That’s what it says to do percentage-wise,” Kiffin said. “This is a team that, we thought we could do well in short yardage situations.” Kiffin consistently defends such decisions by saying he trusts his offense. It’s time for him to punt more often and trust a much-improved defense.

AlBaroudi: FAU going for it on fourth-and-one from its own 29 in the second quarter. With the Owls holding a one-score lead and the ball, Kiffin opted to keep his offense on the field for a fourth down try instead of kicking it away. The decision backfired. The Panthers capitalized on the short-field opportunity, quarterback James Morgan finding Austin Maloney in the end zone.

EXTRA POINT
King: This ripping the helmet of the losing team off the Shula Bowl trophy is getting a little out of hand. It only took a second for the FIU helmet to be decapitated from the trophy once FAU players arrived, but within seconds the FAU helmet had been torn off, too. Players reattached the helmet not long after, which made for much better photos as the Shula Bowl trophy paraded across FIU’s field. Still, it feels like we’re getting close to having the entire trophy dismantled in misguided celebratory bliss. Maybe it’s time to take it down a notch. And, no, I don’t think that will happen.

AlBaroudi: The rotation FAU is implementing at offensive guard is unconventional but effective. Over the past few weeks FAU has been inserting guard Nick Weber into the game to keep starters B.J. Etienne and Antonio Riles fresh and last night showed exactly why. The Owls dominated their cross county rivals upfront, looking well-rested late in the game as their opponents were wearing down. FAU ran the ball 28 times to only six passes in the second half, and that pound-the-ball strategy wouldn’t have worked if not for the interior offensive line imposing its will like how it did. 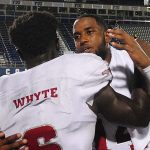 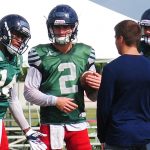