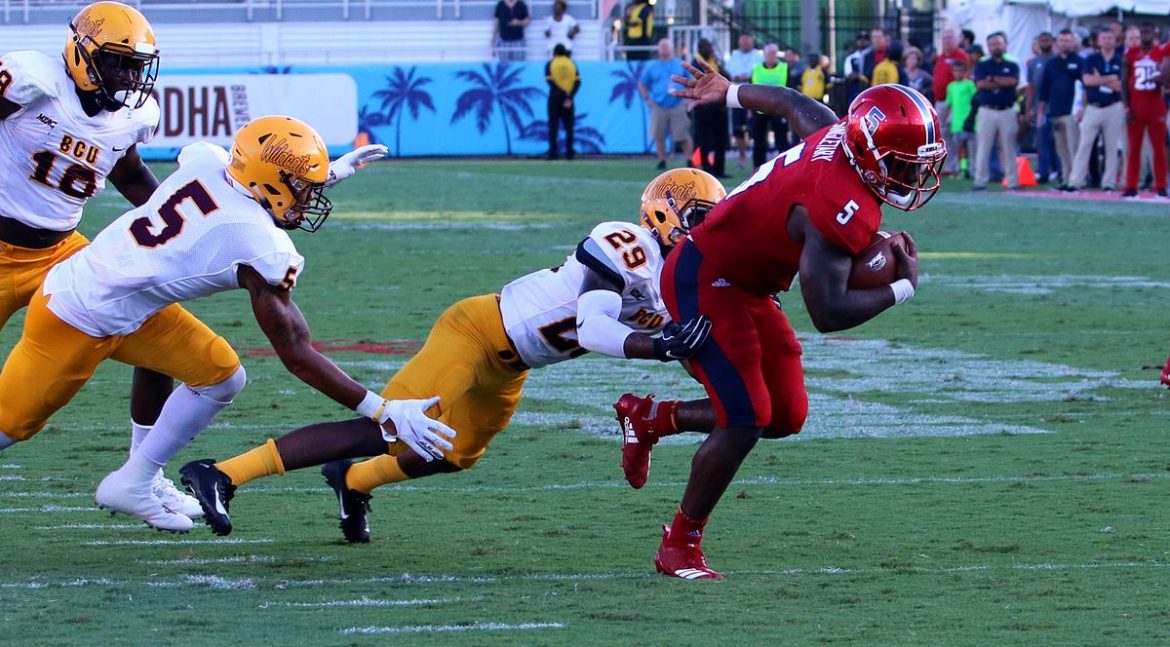 FAU running back Devin Singletary breaks free from a would-be tackle to score his second touchdown of the game. (Photo by Bongo)

BOCA RATON – Florida Atlantic did what was expected of it on Saturday, dispatching Bethune Cookman by three touchdowns. The game featured a record-breaking performance from running back Devin Singletary – what else is new? – another good drive led by De’Andre Johnson and a somewhat lackluster performance on defense. Each week we break down the previous day’s game with our Four Down Territory segment, which analyzes the good, bad and surprising from that contest.

BIGGEST SURPRISE
Chuck King: Devin Singletary’s production. Three games into what was expected to be a Heisman Trophy campaign, the junior running back has yet to record a 100-yard game. Yes, Singletary rushed for five first-half touchdowns on Saturday – and scoring TDs is the objective – but he did so on only 67 rushing yards. Singletary tallied 84 yards on the day. He most certainly would have crossed the 100-yard barrier had he played the entire game, but so far we haven’t seen the explosive Singletary from year’s past.

Wajih AlBaroudi: The lack of a consistent pass rush. Heading into the season the defensive line was arguably the Owls’ most talented unit from top to bottom. Its impact hasn’t quite come to fruition yet. Bethune attempted 33 passes last night and FAU managed only a single sack – coming from Tim Bonner, the team’s leader in that department through three games with two. Hunter Snyder and Charles Cameron didn’t play yesterday but the Owls need them back if they hope to develop the disruptive rotation up front that going into the year they thought they had.

GAME MVP
King: Even given what I wrote about Singletary above, he’s still the MVP. Five touchdowns will do that for a guy. He has a knack for finding the end zone. Singletary set a Conference USA record by scoring a touchdown in his 16th consecutive game. The five he scored on Saturday vaulted him into the NCAA rushing touchdown lead with seven on the season. And that Touchdown Chain perfectly complemented his sideline smile.

AlBaroudi: Who other than the man who broke the single-game school record in rushing touchdowns? Devin “Motor” Singletary was Mariano Rivera-like in his effectiveness closing drives for FAU, cashing in all five of his team’s first-half red zone attempts with a score. Four of his five touchdowns came in the first quarter – a new Conference USA record – and his efficiency in following his blocks and taking advantage of cracks in the defense near the goal line was what propelled FAU to a huge early lead that proved too much for Bethune-Cookman to overcome.

CONTROVERSIAL CALL
King: Try as they might, FAU coaches can’t seem to fix their special teams play. Longsnapper J. R. Clancy struggled with an extra point snaps, and also sent a wayward snap to punter Sebastian Riella on a play which Riella actually did an excellent job of extending until he could launch a 25-yard punt. (The positive: Riella’s first career game without having a punt blocked.) Vladimir Rivas badly missed a 48-yard field goal and Jesse Williams had the first extra point attempt of his career blocked. It’s not a good time to be an FAU special teamer.

AlBaroudi: FAU going for it on fourth-and-five in Bethune territory with a little over two minutes remaining in the game. Up by three touchdowns, quarterback Rafe Peavey led a nearly 10-minute clock-killing drive that finally fell short on third down at the Wildcats’ 16 yard line. After a timeout, an errant snap over Peavey’s head ruined the attempt before it had a chance. The failed conversion broke FAU’s streak of seven straight on red zone and fourth-down opportunities.

EXTRA POINT
King: FAU’s offense is missing something, and that something might be Antonyo Woods. The Owls are still a unit learning to play together and at times it doesn’t look like they are having as much fun as they did last year. Along with skill, Woods brought intensity and energy to the line of scrimmage from the center position last year. Singletary is reserved. Robison, a redshirt freshman, is still growing into a leadership role. The Touchdown Chain could inserted a jolt of fun and may help build chemistry and personality that at the moment doesn’t exist. These Owls lack the swagger that they showed at the end of last season en route to their first Conference USA title. Of course, that swagger wasn’t there this time last year, either.

AlBaroudi: Kudos to running backs coach Kevin Smith and his players for a rock-solid performance. It wasn’t just Singletary that shined last night, Kerrith Whyte and Silver Saunders made a name for themselves as well. Whyte had an impressive showing as the change-of-pace option behind Singletary, leading the team with 101 rushing yards on the night. That marked Whyte’s first college game above the century mark in yardage – doing so on a 6.7 yards per carry clip. Saunders made his presence felt in not one but two facets of the game. He notched a tackle and a fumble recovery in kick-off coverage, and was subsequently rewarded with the football on offense, where he picked up 46 yards on eight second-half carries. 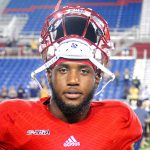 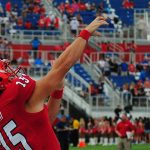