FOUR DOWN TERRITORY:
FAU 42, Wagner 7
Deangelo Antoine gets a game ball, FAU struggles to run the ball and some praise for Chris Robison in our Four Down Territory analysis. 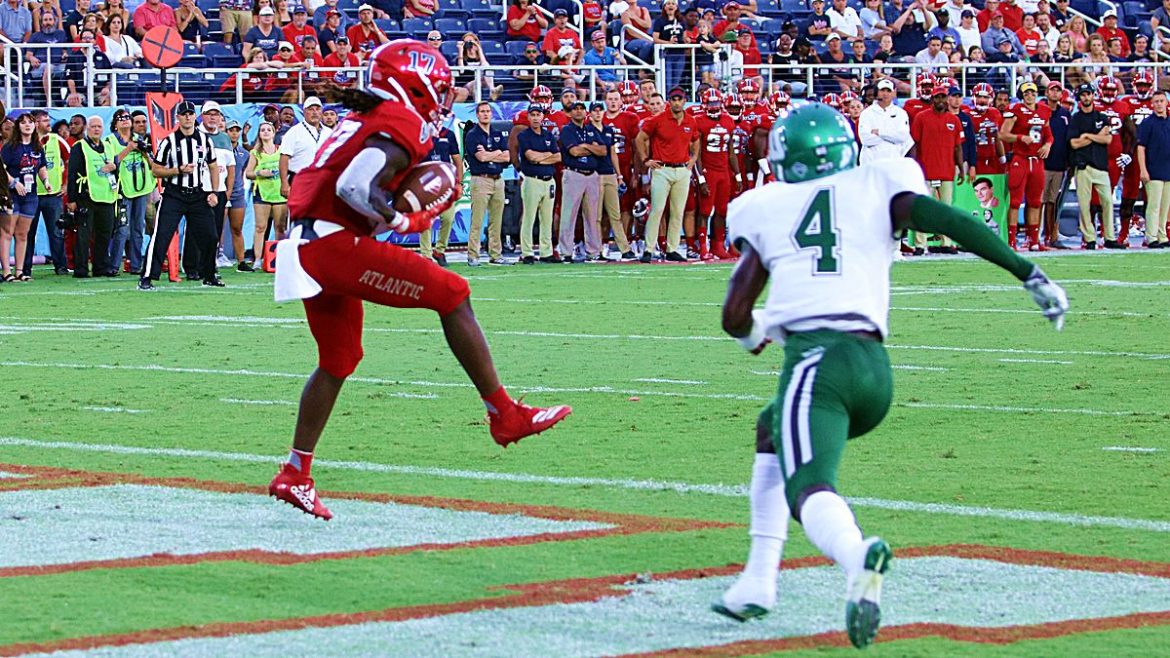 BOCA RATON – FAU did what was expected on Saturday by beating Wagner 42-7. The victory gave the Owls a 2-2 record in their non-conference schedule before heading into Conference USA play.

The Owls raced to a 28-0 first-half lead and coasted to the finish from there. Quarterback Chris Robison and wide receiver Deangelo Antoine enjoyed huge evening, hooking up for four touchdowns. And quarterback Nick Tronti, in his first game action of the season, delivered a 35-yard run – the Owls’ longest of the game – along with a three-yard touchdown run.

Each week we breakdown the good, the bad and the curious from the previous day’s games in our Four Down Territory analysis.

GAME BALL
Chuck King: Chris Robison, It’s probably Deangelo Antoine and his four touchdowns, but we’ll leave that to Matt. So how about some love for a quarterback whose thrown for nine touchdowns with zero interceptions in his last two games? Robison completed 25-of-36 passes against Wagner for 379 yards. He managed the game well. He looks ready for C-USA play.

Matt Wilson: Deangelo Antoine had a career day for the Owls. In his first start as an Owl he recorded a career high 11 receptions for 173 yards and four scores. Antoine was the first FAU receiver in program history to have four touchdown catches in a single game.

BIGGEST SURPRISE
King: FAU couldn’t run the ball against an FCS opponent. There simply weren’t any holes. Remove Tronti’s stats from the equation and the Owls managed only 80 yards on the ground. The problem isn’t the running backs. The FAU offensive line remains ineffective. That’s concerning.

Wilson: FAU’s running game struggled against Wagner. FAU only recorded 120 yards on 31 carries with 40 of them coming from Nick Tronti in the fourth quarter. The Owls were not able to find holes due or even break past the line of scrimmage. Freshman running back Larry McCammon took a step back for the Owls. McCammon rushed last week for 99 yards and then this week he rushed for only 48 yards. With running being the strong suit of the Owls offense for the past several years. The Owls relying on McCammon, it seems like it will be a long year rushing for the Owls.

CONTROVERSIAL CALL
King: Hard to find many issues in this Owls’ performance. It might have been nice for the Owls to move Antoine into the slot to replace the struggling Willie Wright and the ineffective Dante Cousart a game or two earlier, but the Owls also had a need at outside receiver and thought Antoine could be a solution there. Also, it would have been entertaining to see some of the backups enter the game a little earlier.

Wilson: FAU didn’t give running back James Charles carries or catch attempts this week. The Owls did decrease their rushing attempts from the Ball State game to the Wagner game. It was an odd decision to sit Charles and give carries to other running backs. On Sunday Kiffin explained that McCammon had so few carries that the need never arose to substitute Charles into the game. Once the game got out of hand, Kiffin wanted to see more of the Owls’ other true freshman, Kelvin Dean.

EXTRA POINT
King: A month ago most figured that FAU would enter Conference USA play with a 2-2 record, so it’s not surprising the Owls are where they are. But FAU’s current two-game winning streak did little to hide the Owls’ biggest flaw: offensive line play. Robison once again had less time than expected to throw the ball and opposing defenses are experiencing little resistance on running plays. FAU’s 12 penalties on Saturday are also a huge concern. On the plus side, the Owls are taking care of the ball offensively while forcing turnovers defensively.

Wilson: Chris Robison, who had 379 yards and five touchdown passes, is making the offense hum. FAU posted more than 500 yards of offense yet still saw struggled to open the running game. Robison was still having to move throughout the backfield to open space for receivers. The Owls needed this win to enter conference play with a winning streak.

FOUR DOWN TERRITORY:
FAU 42, Wagner 7
Deangelo Antoine gets a game ball, FAU struggles to run the ball and some praise for Chris Robison in our Four Down Territory analysis.
was last modified: September 22nd, 2019 by FauOwlAccess
0 comment
1
Facebook Twitter Google + Pinterest 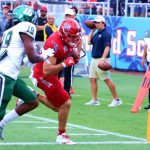 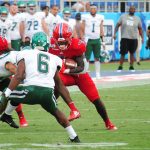 Antoine Player of the Week