FAU accomplished both with the Owls’ 37-7 victory over FIU in Shula Bowl XVII.

The Owls scored two quick third-quarter touchdowns to pull away from the Panthers, then cruised to an easy victory. With the win FAU took over sole possession of first place in Conference USA’s East Division, one half game ahead of Marshall. That lead could be short lived. FAU is off this week while Marshall hosts La. Tech. With a win, the Thundering Herd will tie FAU and hold the tiebreaker with two games remaining for both teams.

Each week we analyze the good, the bad and the curious from the previous day’s FAU game. In this instance, the Owls improved to 13-4 all time in Shula Bowls.

GAME BALL
Chuck King: Malcolm Davidson. No need to over think this one. Davidson returned from injury to rush for 144 yards and three touchdowns. That alone was enough to defeat the Panthers. And Davidson isn’t even 100 percent healthy yet, as evidenced by him being tracked down from behind on his 31-yard first quarter run. That doesn’t happen if the speedster is at full gait.

Matt Wilson: Davidson. FAU’s rushing attack was dominant against FIU and Davidson led the charge, posting 144 yards on the ground and a career high three touchdowns. This was Davidson’s second 100-yard performance of the season for the Owls as he had 149 in the win over MTSU. Davidson is showing he can be the next premiere back for the Owls.

BIGGEST SURPRISE
King: FAU’s offensive line play. This is one of the more pleasant surprise performances of the season. The Owls’ line picked up where it left off from the final minutes of the victory over Western Kentucky the previous week, paving the way for a season-high 261 rushing yards. The lone sack tagged against the unit came when quarterback Chris Robison couldn’t handle a snap and had to fall on the ball.

Wilson: The rise of running back Chauncey Mason. Mason rushed for 49 yards and also caught two passes for 39 yards. With a depleted running back room, it was good to see the reserves come into the game and make an impact. The Owls exposed the weak running defense of FIU. Mason averaged seven yards per carry against the Panthers. With the performance by Mason, the Owls should feel confident about the rushing attack for the rest of the season.

CONTROVERSIAL CALL
King: Leaving Chris Robison in the game too long. Coach Lane Kiffin had pulled all his offensive starters in the fourth quarter, but sent Robison onto the field because the QB was close to the 300-yard mark. Robison struggled with a high snap, ultimately pushing it forward to Willie Wright, who turned what should have been ruled an incomplete pass into an 11-yard run. Because of the free-style nature of the botched play, Robison ended up blocking for Wright. He never did get to 300 yards, falling two yards shy. Was the risk of injury worthwhile? Not in the big scheme of things. Not in the small scheme, either.

Wilson: FAU with 7:40 left in the 3rd quarter deciding to try to convert a fourth down instead of kicking easy field goal. FAU had a fourth-and-one at the FIU three yard line with a commanding 28-3 lead. FAU didn’t convert. The Owls should have thought harder about the field goal. Coming into that fourth down, Vladi Rivas was 2-2 on the night.

EXTRA POINT
King: FAU can’t catch a break. Still trying to recover from the botched UCF game day earlier this season, FAU made a concerted effort to pack the stands for the Shula Bowl, selling tickets at reduced prices and giving away clumps of tickets to marketing partners to distribute as they wished. Inclement weather then washed away what could have been a nice crowd for the Shula Bowl.

Wilson: The Owls had once again a very strong Shula bowl performance. The pass game and the run game were solid for the Owls and the defense did its job and held the Panthers to seven points. Besides the 75 yard touchdown run by Napoleon Maxwell, FAU held FIU in check, not allow them to make big plays on offense. FAU goes into the bye week with a three game win streak. 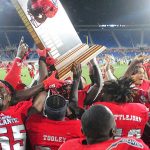 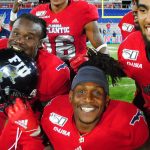