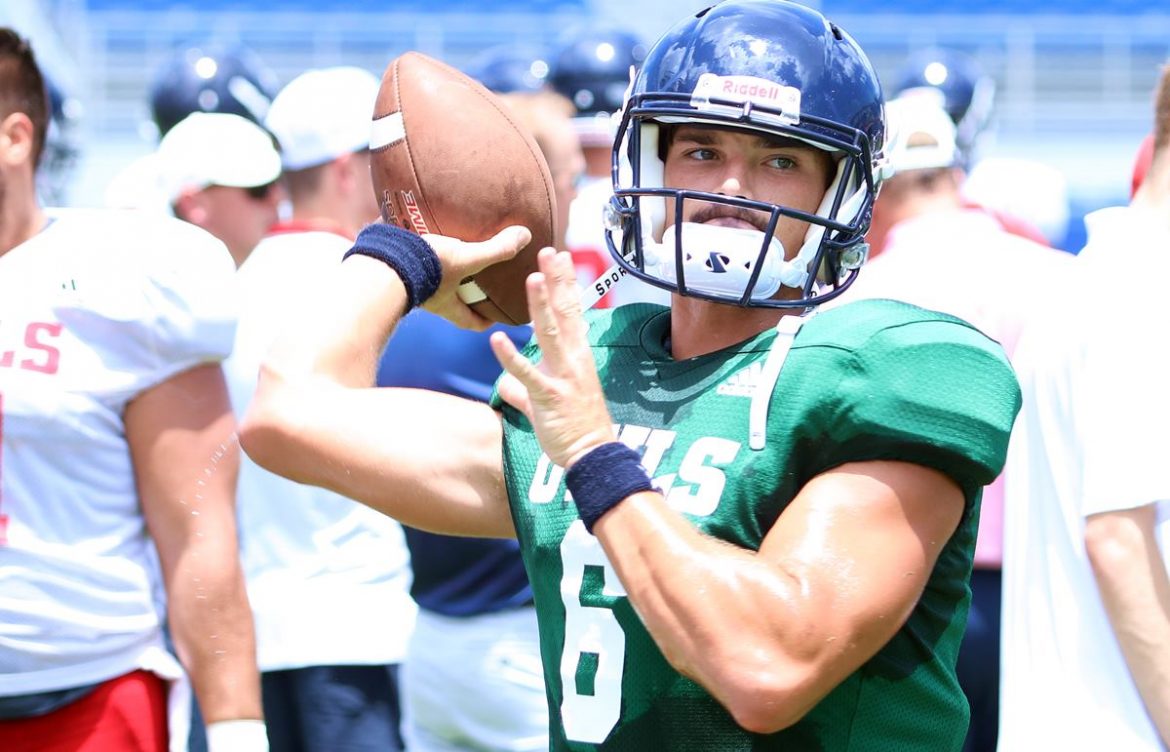 FAU QB Nick Tronti completed a pass, caught a pass and ran for a TD in the win over WKU. (Photo by Bongo)

BOCA RATON – FAU gained bowl eligibility for the second time in Lane Kiffin’s three seasons with a 35-24 victory over WKU on Saturday.

FAU overcame a slow start, injuries at running back and what was likely the coldest weather they’ll play in all season to improve to 6-3, 4-1 in C-USA.

Each week we analyze the good, the bad and the curious from the previous day’s action in our Four Down Territory segment. Enjoy.

GAME BALL
Chuck King: Chris Robison. Knowing that, with the running back unit ravaged by injuries, he’d have to carry the offense Robison came out firing. He may have been too pumped early – six of Robison’s 11 incompletions came in the first quarter – but Robison gained control in the second quarter and started making plays. Robison ultimately threw for 208 yards and two touchdowns. More importantly he didn’t make major mistakes.

Matt Wilson: Nick Tronti. The Owls’ reserve QB made an impact on all aspects of the offense. Tronti completed a pass for 10 yards, rushed for 35 yards including a game clinching 22 yard touchdown late in the fourth quarter, and had a 41 yard reception. Tronti He showed that he needs to be on the field more for the Owls and with Coach Kiffin calling more trick plays, look out for more Tronti.

BIGGEST SURPRISE
King: FAU finding its running game. It says volumes about the Owls’ fortitude that after being stymied on the ground for three-and-a-half quarters, they found a ground game when it was needed most. James Charles, Chauncey Mason and Nick Tronti ran with power. The offensive line created push. Those final eight minutes could be a defining time for this offense moving forward.

Wilson: James Pierre’s breakout game. Quiet through the beginning of the season, Pierre recorded the first multi-interception game of his career. Pierre’s second pick halted WKU’s momentum after the Hilltoppers blocked a field goal late. He also made four tackles.

CONTROVERSIAL CALL
King: FAU’s decision to attempt three fourth down conversions. The Owls moved the ball fairly well on their first drive, but failed on a fourth-and-3 from the WKU 42. Two plays later, the Hilltoppers had their first points. FAU also failed on fourth down early in the third quarter, handing momentum back to WKU. Punter Matt Hayball did convert an important fourth down fake, which helped the Owls win. Not every call worked out, but all three decisions by Kiffin were eminently defensible.

Wilson: Going for it on fourth and six instead of kicking the long field was a controversial call. With the ball at the WKU 34 yard line, Coach Kiffin decided to keep the offense on the field instead of bringing out Kicker Vladimir Rivas. Kiffin should have weighed the options. Coming into the game, Rivas has shown he is a reliable kicker as he is 10-12 kicking this season. He has never kicked a 50+ yard field goal but being able to make the game a three score game, the Owls should have looked into kicking.

EXTRA POINT
King: FAU is bowl eligible, but oddly there remains little buzz about the program compared with the 2017 team. Maybe it’s because Kiffin is now a known quantity. Maybe it’s that FAU isn’t blowing teams out like it did two years ago. Certainly the churn in the athletic marketing department, which once produced so many high quality videos and scheduled Lane Train appearances, is having a negative effect. Maybe the excitement will increase with this week’s Shula Bowl. But either way, the lack of enthusiasm on campus and in the community is odd. This team isn’t the 2017 squad, but it’s better than nearly every other team the Owls have ever fielded.

Wilson: FAU is now bowl eligible and still in the hunt for the C-USA East title. The Owls played a strong game against a tough WKU team and showed they are a strong opponent in the conference. Marshall still controls its own destiny, having beaten winless Rice 20-7 on Saturday. FAU did a good job creating turnovers. Receiver Willie Wright scored a touchdown on his lone reception of the game and FAU rushed for 189 yards. FAU heads into the Shula Bowl with confidence. Kiffin is looking to go 3-0 against FIU.

FOUR DOWN TERRITORY:
FAU 35, WKU 24
FAU quarterbacks shine, the Owls find a running game and about those foruth down decisions - all topics addressed in our Four Down Territory analysis.
was last modified: November 3rd, 2019 by Chuck King
0 comment
0
Facebook Twitter Google + Pinterest 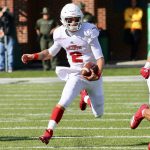 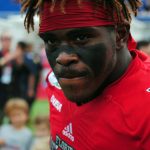