Each Sunday during the football season OwlAccess.com writers Chuck King, Jake Elman and Matt Wilson dissect the previous day’s FAU football game in a feature we call “Four Down Territory.” Here’s our analysis of FAU’s 28-23 loss to Charlotte.

BIGGEST SURPRISE
King: That this far into the season FAU is still a punchline. At first it seemed like FAU was playing down to the level of its opponents. But after losing to FIU and Charlotte, two of the worst teams in the nation, in consecutive weeks, maybe this is what the Owls are – a bad team. One of the worst in the nation. The Owls have yet to defeat an FBS-level school this season. It’s like they’ve gone back into rebuilding mode, but skipped the part about winning.

Elman: That FAU’s defense held a team below 30 points. I went into this game thinking we’d see a shootout like last week’s Shula Bowl, but FAU’s defense really stepped up in the second half and Trey Hendrickson showed why he’s likely getting selected on the second day of the NFL Draft. It’s a loss, fine, and the pass defense was again atrocious, but you take the small positives when you can get them.

Wilson: Buddy Howell not taking all the reps. Howell has shown that he is the Owls’ best running back this year and coach Charlie Partridge doesn’t see it. Howell scored every FAU touchdown on Sunday and leads the team in touchdowns but Partridge still gives a good chunk of carries to Singletary. Next game FAU needs to have Howell as the main back for the run game to be at its peak.

PLAYER of the GAME
King: Trey Hendrickson, Conference USA’s preseason Defensive Player of the Year enjoyed his best game of the season. The senior recorded his first multi-sack game of the season, with two, and added another tackle for loss. He also gave the Owls a chance to win with his strip/fumble recovery in the game’s final minute. Never one to be limited, Hendrickson also joined the Owls on offense, leading the way on one of Buddy Howell’s touchdown runs. Huge effort. He deserves a better senior season.

Elman: Take your pick on who you want from the winning team, but the duo of Buddy Howell and Hendrickson need to be honored here. Their games speak for themselves: Howell had three touchdowns and joined the double-digit TD club for the Owls (not a big club!) and Hendrickson had two sacks on defense. Whether this team finished 7-5, 1-11, or 3-9 again, we’ll be pointing to these two as the two stars at the end.

Wilson: Howell had three touchdowns and also racked up 100 yards in the game. He was the bright spot on the FAU offense. Trey Hendrickson also had a big game with some key sacks and tackles to keep FAU in the game.

CONTROVERSIAL CALL
King: How in the world did the replay official see indisputable evidence that allowed him to over rule the Hail Mary TD? Nothing is more frustrating to a team – or a fan for that matter – that when a replay official reverses a call that was correct on the field. That being said, why does FAU insist on playing press coverage late in halves? We wrote about it last week, when FAU got away it. This time the Owls got burned for a 37-yard touchdown in the closing seconds of the first half. FAU put its players in position to fail.

Elman: The final play, but part of this goes into the stadium and the replay people for not showing a replay on the board. Really? The final play of a game and you just keep showing the spinning owl? If you show the replay on those massive video boards, maybe one of the referees gets another, better look and see that Solomon came down in bounds — or that he didn’t. FAU normally does a great job with replays on the big board, but they absolutely dropped the ball on this one.

Wilson: Partridge used both Jason Driskel and Daniel Parr in the game. Using both quarterbacks made the game unbalanced because FAU did not have a consistent presence at the leadership position of quarterback. FAU needs to decide who will play quarterback for the rest of the season.

EXTRA POINT
King: Aside from the loss, FAU did a fantastic job of managing a trying week. The Owls had a plan for Hurricane Matthew and executed it well. By all accounts the football team’s evacuation to Tampa went smoothly. FAU did a good job of keeping the public informed about the status of Saturday’s (then Sunday’s) game. Free admission and parking was a nice touch, though the 7,401 announced crowd seemed a tad high considering there were about 100 students in the stadium. They way Athletic Director Pat Chun and coach Charlie Partridge handled the entire week demonstrates then internal growth of the FAU athletic department. The ride wouldn’t have been nearly as smooth a few years ago.

Elman: Enough with the ‘Fire Partridge’ trend that fans have started. First, who in the immediate is going to fix this program if you fire Partridge? You think Les Miles or Art Briles is coming to Boca? So then you look at the current staff and who you can put as an interim; does anyone really scream ‘better coach than Charlie’ on the staff right now? The downfalls of this team come partly from downfalls of the coaching as a whole and the program, which in short means you can’t pin everything on Partridge. Even if this team goes winless for the rest of the year, Partridge is going to keep coaching – and probably will be back next year too. I’ve flat out admitted that changes need to come and look, maybe part of that does need to come with the coaching staff at some point. But right now, if the Owls want to get back on the right track with both winning and program development, that means they need to keep Partridge and stand by him. Firing Charlie won’t fix attendance, it won’t fix morale, and it won’t fix the losses; it will just prove that this is a lost and broken program.

Wilson: FAU once again struggled in a winnable game. The defense was not able to stop a Charlotte offense that was not very good. FAU needs to get the defense solid and have a passing game in order to be able to have a chance and be able to hang in C-USA play. 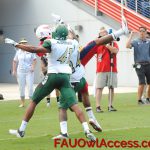 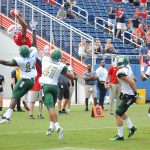 What happened to the coach a few years ago when the coach was released? I believe Edwards was his name and the Owls won 5 in a row? Is he available?