First Loss
FAU falls to Georgia Southern 80-70 in the Bahamas on Friday, handing Dusty May his first loss as Owls coach.

New FAU coach Dusty May will not run through his initial season undefeated.

After beginning his coaching career by leading the Owls consecutive victories over Florida Tech and UCF, FAU fell to Georgia Southern 80-70 on the first day of the Islands of the Bahamas Showcase on Friday.

“(Georgia Southern) is a veteran team that’s going to win a lot of games this year,” May said. “It was a good learning experience for our guys, now I’m anxious to see how we bounce back.”

The Eagles used an 18-9 run midway through the second half to pull away from the Owls and secure the victory.

FAU trailed early before using an 18-6 run to take the lead late in the first quarter and trailed by only a point at halftime.

The Owls cut what had been a double-digit, second-half Eagles’ lead to four with five minutes remaining, but a 10-0 GSU run put the game out of reach.

Moving Backward: Starting forward Xavian Stapleton failed to score, missing all four shots, and fouled out in only 22 minutes of play. …Starting guard Anthony Adger only scored two points on 1-of-12 shooting, missing all four of his three-point attempts.

Key Stat: 2 – Fast break points for an FAU offense that expects to push the tempo.

Up Next: FAU faces Towson at 2 p.m. on Saturday on the second day of the Islands of the Bahamas Showcase. 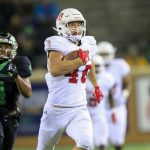