Buddy Gets Down
FAU running back Buddy Howell is one TD shy of trying the FAU single-season record. Before the score Howell joins Karla DeVivo for this week's Down With DeVivo.

BOCA RATON – Racing past some and over others, FAU running back Buddy Howell has been one of the few bright spots for the Owls’ offense this season.

He’s been a touchdown machine, needing only one more to tie the program’s single-season touchdown record of 11, held by Alfred Morris.

A junior, Howell runs with a rare combination of power and speed. He’s rushed for 712 yards on the season, and is averaging 5.1 yards per carry.

Howell will try to tie, or even break, that touchdown record on Saturday when Texas-El Paso comes to Howard Schnellenberger Field. Kickoff is scheduled for 6 p.m.

Before he takes the field, though, Howell joined our Karla DeVivo and got Down With DeVivo. Watch the video and learn a little bit more about FAU’s leading rusher.

Buddy Gets Down
FAU running back Buddy Howell is one TD shy of trying the FAU single-season record. Before the score Howell joins Karla DeVivo for this week's Down With DeVivo.
was last modified: November 11th, 2016 by FauOwlAccess
0 comment
0
Facebook Twitter Google + Pinterest 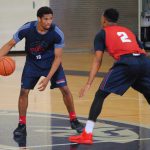 Pick Up The Pace