Welcome to the debut episode of Down With DeVivo, a weekly segment on OwlAccess.com where host Karla DeVivo profiles an FAU football player.

Nagel, a redshirt junior, was awarded with a scholarship prior to the season. In Down With DeVivo, Nagel discusses his favorite football players, shows off his dance moves and talks about life as a member of the fraternity Delta Tau Delta.

Through seven games this season Nagel has recorded 21 tackles, including one sack. 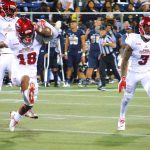