Our Offensive MVP
Our panel of five experts split on deciding the FAU offensive MVP, with three different players getting at least one mention. 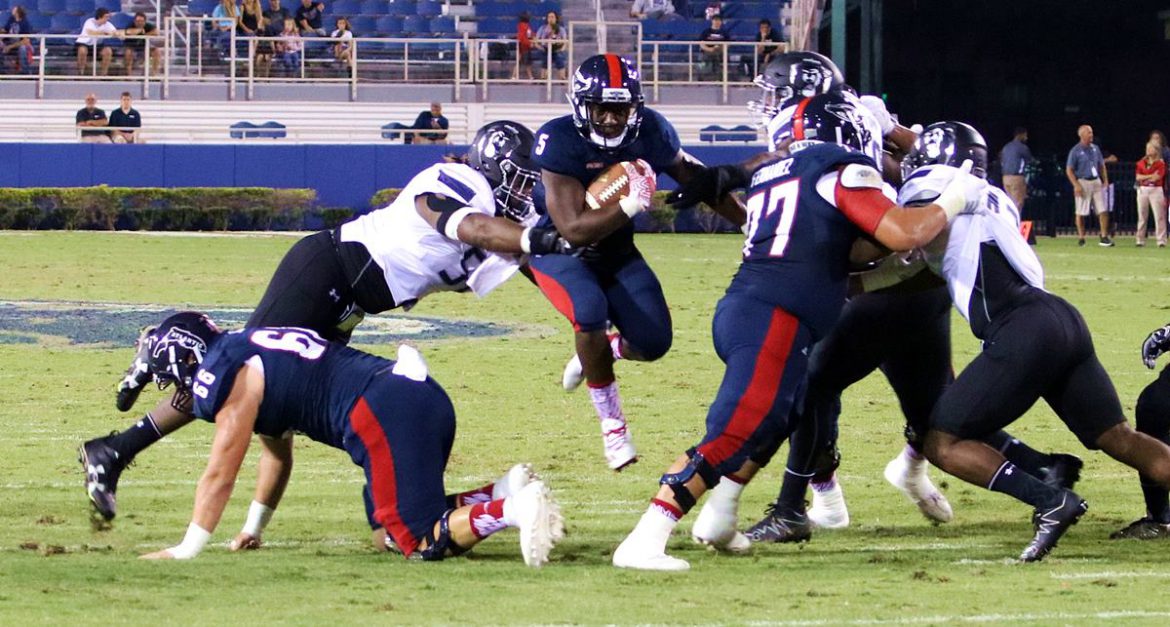 Devin Singletary leaps through a hole in the first quarter of FAU's loss to ODU. (Photo by Bongo)

BOCA RATON – As the 2016 calendar year winds down, we here at OwlAccess.com figured now would be a good time to look back at some of the best (and the not so best) aspects of this past football season. It’s been a full month since the Owls last took the field. With the firing of Charlie Partridge and the hiring of national celebrity Lane Kiffin as the new coach, FAU has garnered much more attention than it normally does at this time of year. But we’re focusing on the season. Joining our Chuck King and Jake Elman in offering their superlatives are three colleagues from ESPN West Palm: FAU play-by-play man Ken LaVicka, analyst Kris Bartels and producer (and host of OwlTalk) Brian Rowitz. We’ll launch the series with our choices for the Offensive MVP.

Chuck King (OwlAccess.com): If Devin Singletary had accomplished what he did throughout the entire season, it would probably be him. If Buddy Howell didn’t see his carries dwindle in the season’s second half because of Singletary’s emergence, it would probably be him. The one constant for FAU’s offense this season was center Dillon DeBoer, who played every play. On an Owls’ offensive line decimated by injuries, DeBoer held the unit together, opening holes for Singletary and Howell. DeBoer’s the MVP.

Ken LaVicka (ESPN West Palm): Buddy Howell. I know that Devin Singletary dominated the final half of the season and, for all intents and purposes, took Howell’s starting tailback job, but Howell was the steady contributor all season long. Racking up the most rushing TDs in a single season means something, especially behind that injury-riddled line, and Howell did that for 12 games.

Kris Bartels (ESPN West Palm): With a lot of hype around a new offense, injuries to the offensive line placed a huge burden on the play calling and overall look of the offense. The “No Huddle, No Mercy” approach faded just as quickly as the rise of true freshman, Devin Singletary. With the injuries and inconsistencies across the o-line, Motor made it look easy. His vision and patience were more of an asset than his speed and quickness. Plays that should have been stopped in the backfield ended up being 25-yard gains because Motor saw a defender shoot through the offensive line, side stepped the tackle and ran to end zone. Singletary not only shattered a bunch of records as a freshmen, he gave the offensive line some confidence and eased some pressure off of the quarterback’s shoulders.

Brian Rowitz (ESPN West Palm): Devin “Motor” Singletary. Excuse the pun but Motor seemed to really rev up the offense during the 2nd half of the season. Coaches were thrilled when he made the flip from Illinois on Signing Day and you could really see why when he got more involved in the offense. Even when defenses seemed to know he was getting the ball late in the season it didn’t matter at all. His involvement in the offense in 2017 could go a long way to determining FAU’s success.