Sloppy Knight
FAU turns the ball over three times, fails to slow Knights' potent offense in 56-36 loss to No. 16 UCF. 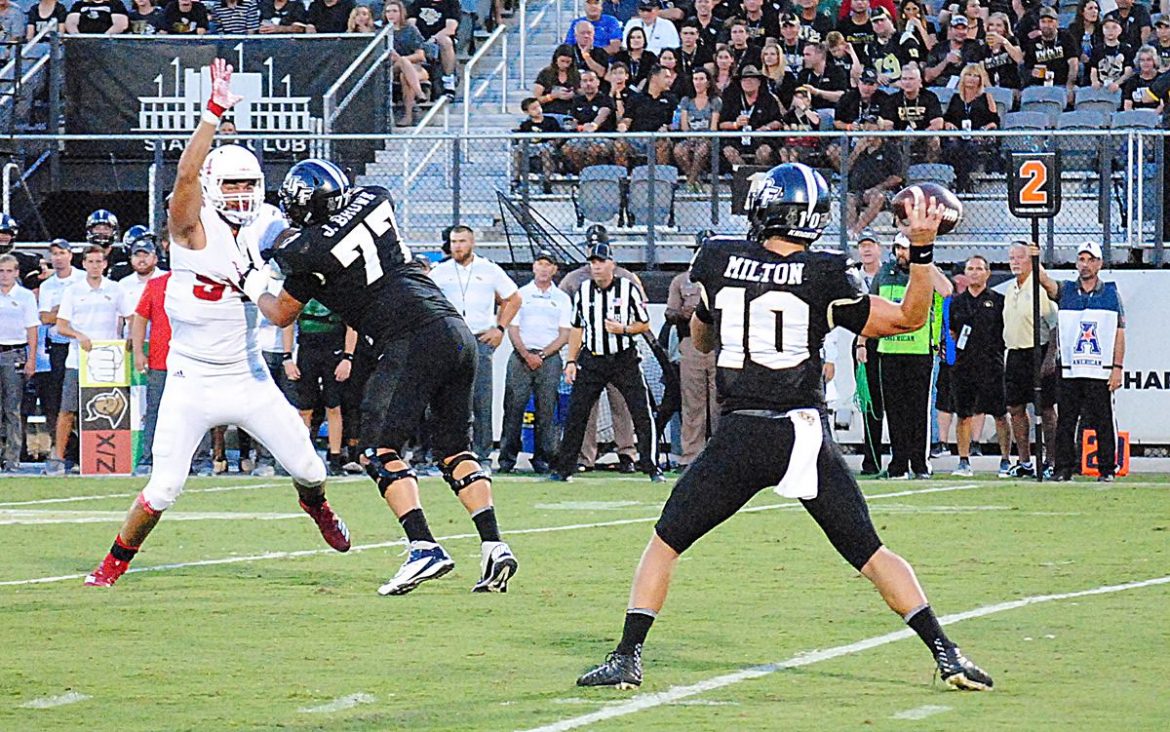 ORLANDO – A strong motor wasn’t enough to power FAU ahead of a high-octane Knights’ attack which allowed No. 16 UCF to blow past the Owls 56-36.

FAU erased  a 14-0 deficit to take a 17-14 lead in the closing minutes of the first half, only to see UCF strike quickly in the final seconds of the second quarter and again in the opening minutes of the third quarter.

“That kind of broke our back a little bit there,” FAU coach Lane Kiffin said.

Down by 14 early, FAU looked like it was in for a long game similar to the one it played in Norman, OK., a 63-14 loss in the season opener.

Unlike Week 1, however, the Owls fought their way back into the game. They did so with a dominant effort on the ground, Singletary scoring twice in the span of five minutes, the first two of what would be three touchdowns.

“We always thought we had a chance, we never gave up,” quarterback Chris Robison said.

Down 14 in the first quarter with the game seemingly slipping away, the Owls went on an impressive drive that was eventually halted in the red zone, hitting third down on the UCF 11 yard line. The Knights were expecting a pass given the down and distance but Kiffin dialed up a draw play, Singletary taking a delayed handoff down the middle to give FAU its first score with seconds remaining in the opening quarter.

FAU followed up that touchdown with another on its next possession, Singletary racing through a big hole set up by tackle Reggie Bain and guard B.J. Etienne to find the end zone from nine yards out.

Singletary finished with 131 yards and three touchdowns on the night. On a night where he became FAU’s all-purpose yardage leader and moved into third place on the Owls’ career carries list, passing Doug Parker, Singletary rushed for 100 yards in a game for the first time this season and became the first NCAA back to rush for 10 TDs this season.

After the Owls ran for 376 yards and six touchdowns last week, Singletary said his team’s rushing offense had an “average” performance. He thinks it took a step forward against UCF, a game where FAU ran for 320 yards and four scores.

“It picked up, but it’s still not where we want it to be,” Singletary said of the FAU ground game’s success.

The Owls defense, on the other hand, took a turn in the other direction. They allowed UCF to convert on all six of its red zone opportunities and stopped the Knights on only four of their 11 third down attempts.

Kiffin expressed disappointment in his defense after the game, noting that while injuries to players like Jalen Young and Hunter Snyder have hampered the unit, he still expected them to create more turnovers.

FAU has only three takeaways through four games – a pair of interceptions from linebacker Rashad Smith and a fumble recovery.

When Vladimir Rivas’ 32-yard field goal gave FAU its lone lead with 1:34 remaining in the first half that put UCF in a position they had yet to face this season: being behind in a game.

The Knights immediately struck back when they got the ball back on their own 22 yard line with 1:34 remaining, Milton going 4-4 for 74 yards on a drive that capped off with a 21-yard touchdown strike to an uncovered Marvin Williams, giving UCF a 21-17 lead heading into the half.

Robison and the Owls answered as best they could.

The redshirt-freshman quarterback faked a handoff to Kerrith Whyte, stepped up in the pocket to avoid a rusher and found Whyte free on a wheel route for a 23-yard touchdown to bring the Owls within 12.

FAU’s comeback efforts were finally deflated after UCF scored what ended up being a dagger late in the third, Milton delivering a 19-yard dart in the endzone to Gabriel Davis to put his team ahead 42-23.

Both teams then traded a couple of scores in the fourth when the game was already out of hand, UCF taking it 56-36 for its country-leading 16th-straight win.

UCF’s final score came via Robison’s third interception of the night, which Shawn Burgess-Becker returned 48 yards for a score.

“Three turnovers to none, you’re not going to beat a good team like that,” Kiffin said.

FAU has never beaten a ranked team, this being their 21 loss in as many tries. 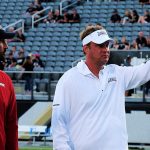