“FAU is an up-and-coming program,” Johnson said. “They’re dedicated and committed to winning.”

Johnson visited FAU this past weekend and was strongly considering signing with FAU despite the Owls’ lack of a head coach.

FAU’s hiring of Kiffin, a well-respected developer of quarterbacks, sealed the deal for Johnson. Kiffin phoned Johnson on Tuesday.

“Hiring coach Kiffin was a strong powerful move and I just wanted to be a part of that,” Johnson said.

Johnson, out of Jacksonville-First Coast, originally attended Florida St. but was dismissed from the team after a video surfaced of him punching a girl at a bar.

On Tuesday Pat Chun couldn’t discuss De’Andre Johnson specifically, but he discussed the possibility of signing recruits with troubling pasts.

Chun wasn’t the only administrator to speak with Johnson. This one went all the way up to FAU president Dr. John Kelly.

“(Chun) and Dr. Kelly, they asked about the situation and what happened and where my head was at,” Johnson said. “It was a great meeting. It lasted longer than I anticipated. After that meeting I felt they were going to welcome me with open arms.”

It’s unusual for an FAU recruit to meet individually with the president of the university.

“I would say that Dr. Kelly wanted to meet me personally and assess my character as a person, not just a football player,” Johnson said.

Following the incident in Tallahassee, Johnson transferred to East Mississippi, electing to sit out the 2015 season.

The 6-foot-1, 185-pound Johnson threw for 2,646 yards and 26 touchdowns against only six interceptions this past season. He also led East Mississippi in rushing with 846 yards.

The Netflix series “Last Chance U” featured Johnson during his time at East Mississippi.

Chun said FAU wouldn’t necessarily shy away from recruits who’d made past mistakes.

One of the most coveted quarterbacks of the 2015 recruiting class, Johnson threw for 47 touchdowns as a senior at First Coast and ran for nine more.

Despite his impressive season at East Mississippi, offers from Power 5 schools didn’t follow Johnson. Texas St. was reportedly the only other school showing interest.

“Not really being recruited the way I felt I deserved to be recruited, it was kind of humbling for me,” Johnson said.

Redshirt sophomore Jason Driskel started 11 games at quarterback for FAU last season. Redshirt freshman Daniel Parr started once and saw significant action in about half the Owls’ games. Steven Frank redshirted in his first season with the Owls.

The duo combined for 2,521 passing yards, nine touchdowns and 13 interceptions.

The battle to be FAU’s starting signal caller figures to re-ignite in the spring regardless of whether Johnson elects to attend FAU. 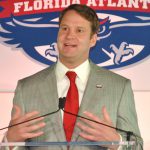 Why would you say that? Yes, the incident in the bar was bad, but we haven’t heard of any other incidents that would suggest that trouble is a chronic situation for Johnson. And he’ll be divisive to whom? The players? If he’s leading FAU to wins I don’t see that happening.