Surprises In Store
It's safe to assume that the first FAU Signing Day under Lane Kiffin will hold some surprises.

BOCA RATON – Lane Kiffin wants to make a splash with his first recruiting class – and he may be about to do exactly that.

Defections by long-standing commits weren’t always followed by a new addition to the commit column – at least not publicly. That seems to have been by design.

Multiple recruits told OwlAccess.com that coaches asked them not to announce their commitments publicly. All the better to surprise on National Signing Day.

Many of Kiffin’s recruiting efforts have gone unreported.

This past weekend, the final weekend of the recruiting season, Kiffin brought about two dozen recruits to Boca Raton, putting them up at the Boca Raton Hotel and Resort.

Entering Wednesday, National Signing Day, 13 recruits have pledged to sign with FAU. The number of actual signees could be significantly higher.

Previous FAU coach Charlie Partridge said the Owls expected to sign about 18 players as part of this year’s class. OwlAccess.com has learned that Kiffin sent approximately 30 FAU National Letters of Intent to recruits with hopes that most (if not all?) will sign with FAU.

It’s highly unlikely that all will.

FAU is in battles with multiple Power 5 schools over players that might shock the college football world by signing with the Owls.

In C.J. Wilson, the Owls stand to sign their second running back in four years from Daytona-Beach Mainland. Trey Rodriguez is no longer with FAU, but former Mainland coach Keynodo Hudson is, joining Kiffin’s staff after a stint as a defensive analyst for Southern Cal.

Alabama cornerback Zyon Gilbert has narrowed his decision to FAU and Troy. Devin Rockette couldn’t stop praising FAU and Kiffin’s staff following his official visit. About a week later the Owls finally offered him. He’s yet to publicly announce a decision.

Alabama offensive lineman Preston Mixon committed to FAU following his official visit, then de-committed a the following week but didn’t commit elsewhere. Will he come back to FAU?

Miami-Southridge safety Billy Gibson, a former Miami commit, quietly visited FAU but is believed to be leaning toward Oregon.

Ocala cornerback O.J. Tucker is an Iowa St. commit that the Owls are trying to flip.

FAU missed out on USC graduate transfer Khaliel Rodgers, who tweeted his commitment to Iowa St. on Sunday and has already signed financial aid forms with the Cyclones.

Four of the players who have publicly announced their commitment to FAU hail from the junior college ranks, with quarterback De’Andre Johnson having already enrolled at FAU. Four more originally committed to the Owls under Charlie Partridge.

Then there is the case of Jacksonville-Sandalwood cornerback Quran Nafiz. An FAU spokesperson confirmed that Nafiz is currently an FAU student but said that, at this moment, he is not with the football team. Will FAU officially announced Nafiz as part of the Owls’ 2017 signing class?

Fans will find out few hours from now. 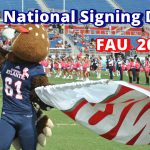