Signing Day Battles
Nine committed players are expected to sign with FAU on Wendesday, and nine others have the Owls at or near the top of their lists.

Entering Wednesday, at least nine players who are either uncommitted or are soft commits could end up signing with FAU. And that would be on top of the 15 players who have either already signed during the early signing period, announced plans to transfer, or committed to the Owls over the past couple months and will sign on Wednesday.

The Owls will be watching three different time zones come sunrise, starting in Lakeland. Offensive lineman Dacoda Weaver had been committed to Liberty but backed away from that commit on Monday, a couple days after he met new FAU offensive line coach John Garrison for the first time.

In the central time zone, the Owls will be hoping to beef up the middle of their defense. A signing by Tyler J.C. defensive tackle Marcel Southall would go a long way toward accomplishing that goal. The former Texas Longhorn visited FAU in early December but didn’t sign with anyone during the early period. On Wednesday he will decide between FAU and Louisiana-Lafayette.

Before lunch the Owls will turn their attention to the west coach where Consumnes Oaks defensive back Kahlef Hailassie, seems intent on revealing his choice via a signing day video. A former Colorado commit, Hailassie appeared ready to head to FAU before visiting Washington St. this weekend.

Closer to home, Boynton Beach linebacker Abraham Beauplan has yet to announce his decision. The Owls enter Wednesday without an announced linebacker commit.

OwlAccess.com continues to hear unconfirmed talk that Hutchinson CC running back B.J. Emmons is reuniting with Lane Kiffin. Emmons spent his freshman year at Alabama in 2016, when Kiffin served as the Crimson Tide’s offensive coordinator. Emmons averaged 4.6 yards per carry and scored 10 touchdowns in 12 games for Hutchinson. He fumbled the ball seven times, losing four of them.

The Owls also still appear to have a puncher’s chance at another running back, Wetumpka’s (Ala.) Kavosiey Smoke. A tremendous athlete, Smoke is expected to sign with either North Carolina or Kentucky, but he enjoyed his visit to FAU, hasn’t publicly put said the Owls are no longer a consideration, and could decide the Lane Train is the best mode of transportation to an NFL destination.

“Kiffin did an awesome job when they brought him down there,” Rogers said in the days following the visit. “It’s really up in the air.”

Hawkins has since taken his official visit to Mississippi and remained quiet about the decision.

Dooly Co. (Ga.) tackle Travis Glover could be one more piece of the offensive line puzzle – and a corner piece at that. Glover visited Western Kentucky this past weekend – two weeks after visiting FAU – and he could well be choosing between the two C-USA schools. Georgia St., another school Glover visited, could also be in the mix.

Finally, College of the Canyons offensive lineman Carlton Lorenz had hoped to announce a decision on Monday, but that day passed without word. Lorenz visited FAU but did not leave with an offer from the Owls. He may be holding out for that offer – a wait that could extend beyond Wednesday.

Those are the prominent names linked to FAU, but with Lane Kiffin being involved there’s always the likelihood of a surprise or two. Last year D’Anfernee McGriff wasn’t linked to FAU until he signed his NLI. During this year’s recruiting process, FAU asked several commitments to keep their decisions quiet. There could well be a few such players yet to be identified.

Two more commits – Arizona Western center Zack Bennett and Fort White tackle Doug Johnson – are offensive linemen. The Owls also hope they have their quarterback of the future in Lincolnton’s (N.C.) Cordel Littlejohn, and their breakaway running back in Kissimmee-Osceola’s Malcolm Davidson. 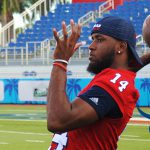 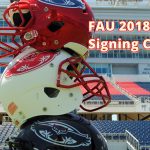