Most Improved
Offensively, one group of FAU players grew as a unit. Defensively, a linebacker showed he could be a force for the next couple of seasons.

BOCA RATON – Christmas is the day of giving, so why wouldn’t we continue presenting our FAU football postseason awards? The best season in FAU football history provided plenty of deserving candidates across a multitude of positions. We started the award process with Newcomer of the Year. Now we’ll move to Most Improved player. Young both last season and this one, the core of FAU is still growing and improving. Who made the biggest leaps? Glad you asked.

Yes, this is a bit of a cop out, but really, would it be right to choose only one offensive lineman? Reggie Bain returned from a broken hip that cost him all of last season to become an All-Conference USA performer. Center Antonyo Woods joined Bain on that team despite not having played the position before and struggling with the snapping portion of the job early in the season. Guard Roman Fernandez went from walk-on to All-Conference USA.

Senior Jakobi Smith made his final year the best season of his career, beating out transfer William Tuihalamaka for the starting right guard spot an never letting go. And sophomore Brandon Walton started every game for the Owls at right tackle, perhaps a precursor of things to come.

After starting eight different lineups in their first eight games last season, these five overcame the natural nicks and bruises that affect all lines to start every game this year. If you need to separate one of these guys to name one winner, well, have at it. But they worked together all season as a unit. We’re giving them this award to the unit.

Quarterback Jason Driskel also received serious consideration here. He started the season as the third string signal caller, then went 10-1 as a starter. A redshirt junior, Driskel threw for about the same amount of yardage as last year, but posted a 15-4 touchdown-to-interception ratio, compared with last year’s 9-11 mark.

Defensive tackle Steven Leggett finished strong, including 1.5 sacks as part of his 5.5 tackles for loss on the season. Safety Andrew Soroh actually lost his starting spot early in the season but rallied to reclaim it and play a crucial role during C-USA play.

No one, however, improved as much as linebacker Rashad Smith. As a true freshman last year Smith ranked No. 17 on the Owls in tackles with 22, one of which was a sack. Starting next to Azeez Al-Shaair this season, Smith came up one tackle shy of 100, the second most among Owls. Smith led the Owls in tackles for loss with 12, and his six sacks tied Hunter Snyder for most among Owls. Listed at 6-foot-2 and 210 pounds, Smith remains a bit undersized for the position, but he still has two more years of FAU football ahead. He could eventually move to safety, but there would have to be a pretty good reason to break up the Al-Shaair and Smith tandem, two players who combined for 246 tackles this season.

Most Improved
Offensively, one group of FAU players grew as a unit. Defensively, a linebacker showed he could be a force for the next couple of seasons.
was last modified: December 25th, 2017 by Chuck King
0 comment
1
Facebook Twitter Google + Pinterest 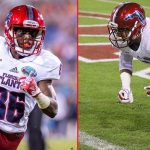 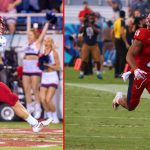