On the night that FAU honored the first bowl team in program history, the Owls took a gigantic step toward once again gaining bowl eligibility with a 69-31 destruction of North Texas.

The victory kept FAU (4-3, 3-0) undefeated in Conference USA play and allowed the Owls to keep pace with Marshall atop the conference’s East Division.

Concerns that a bye week previous to Saturday’s game would drain some of the momentum from a surging Owl team proved unfounded. For the second consecutive game FAU set a program record for points, eclipsing the 58 points they scored against Old Dominion two weeks ago.

Between the first and second quarters the Owls honored players and coaches from the 2007 team that won the program’s only conference title and the New Orleans Bowl.

By that point FAU already had this game well in hand.

Jason Driskel’s 69-yard bomb to Willie Wright gave FAU a 24-0 cushion by the time they honored the 2007 team.

Singletary grabbed the single-season rushing touchdown record all to himself with a 22-yard touchdown run around the left side late in the second quarter. He’s now scored 14 times this season, eclipsing the mark teammate Buddy Howell set last season.

In a battle to teams that entered atop their divisions in Conference USA, the Owls soared to 460 yards and 41 points in the first half alone,

FAU won its third consecutive game for the first time since the 2013 season – the last time the Owls were bowl eligible.

TURNING POINT: Some might say it came when North Texas coach Seth Littrell called out FAU for choosing his Mean Green as its homecoming opponent (teams generally schedule teams they think they can beat for homecoming). FAU coaches and players said they used that statement as motivation. Once the game started, FAU’s early stop of North Texas on fourth-and-1 from midfield on the Mean Green’s first drive gave the Owls good field position. FAU promptly turned the stop into points. Leading 14-0, the blowout was on.

7 – Third down conversions in 12 opportunities for FAU, yet another area where the Owls are improving. FAU also converted three-of-four fourth down chances.

9 – Extra points made by Greg Joseph. Add the two field goals, and his 15 points on the night were the most ever in a game by an FAU kicker.

9.3 – Yards per carry for FAU. Earlier in the week tackle Reggie Bain said that would be a telling stat for this game. Was it ever…

14 – Tackles for Al-Shaair to lead the Owls.

804 – Total yards by FAU, the most ever for a Conference USA team.

925 – All purpose yards for FAU, a program record.

13,277 – Announced attendance, a woefully small number considering the importance of the game and the success the Owls are enjoying.

UP NEXT: FAU takes on another Conference USA power when the Owls head to Bowling Green and face Western Kentucky on Saturday. Kickoff is scheduled for 4:30 p.m. 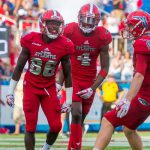 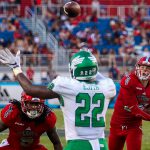