HARD KNOCKS at the OX: Switching Sides
Josh Kendall switches from defensive to offensive line - a move he hopes will extend his football career beyond FAU. 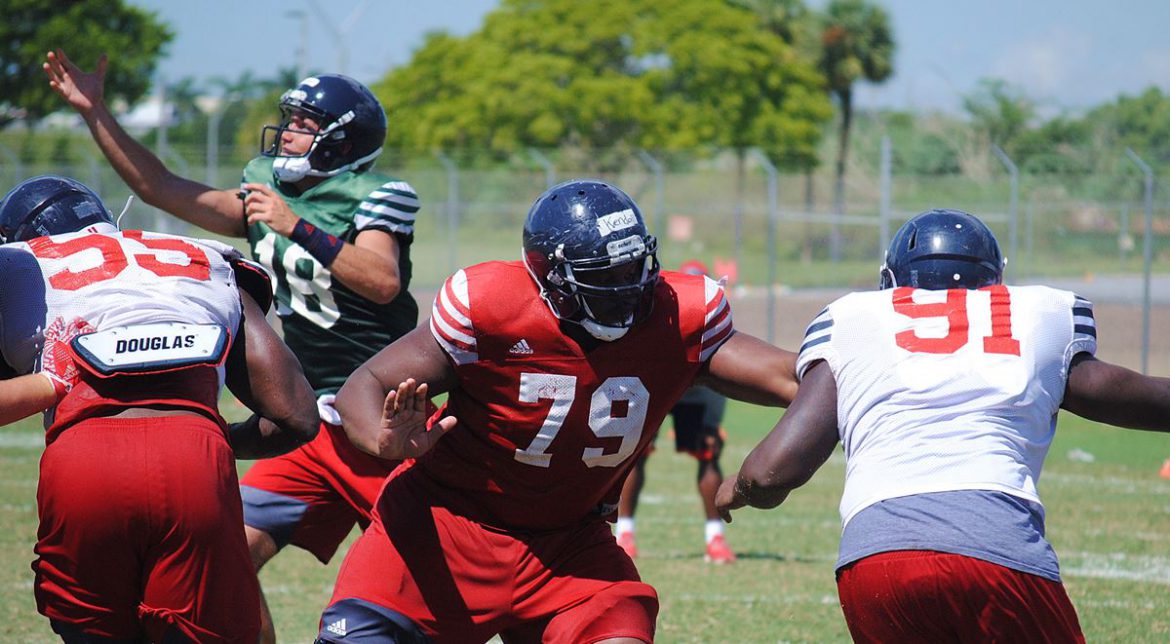 BOCA RATON – In need of offensive lineman, FAU reached across the line of scrimmage to defensive tackle Josh Kendall.

A redshirt junior, Kendall learned of the move on Friday afternoon. On Wednesday he worked with the third team at right guard.

It’s not a completely new position position for Kendall, who also played along the offensive line in high school.

“I told my high school coach that I would rather attack the ball than protect it,” Kendall said.

Kendall had seen time with the second team along the defensive line early in camp. That unit recently added Pittsburgh transfer Jeremiah Taleni at defensive tackle.

On the offensive side of the ball, Kendall says he’s enjoying plays on which he pulls, giving him the opportunity to seek out an opposing defender and deliver a blow. But Kendall knows he still has a ways to go when it comes to pass protection, especially his drop steps and hand placement.

“It’s different,” Kendall said. “It’s the exact opposite of what we do as a D-line. Can’t have my hands lunging out.”

The biggest positive Kendall sees about moving to the offensive line is that it could eventually prolong his career beyond FAU.

“I’ve heard stories about pro D-linemen who switch over to offense and they just ball,” Kendall said.

Making Plays: CB Chris Tooley reached between wide receiver Bobby Mitchell’s arms to knock away a Jason Driskel pass in the back of the end zone during seven-on-seven drills. ……Linebacker Rashad Smith continues to make it dangerous for quarterbacks who attempt to throw the ball across the middle. On Wednesday he made a diving break-up on a Driskel pass intended for tight end John Raine. …Devin Singletary ripped off a 70-yard touchdown run, bouncing an inside run to the left and down the sideline at the start of team scrimmage. …Defensive end Hunter Snyder recorded a sack on Daniel Parr in the full team scrimmage. …Haiden Nagel sacked Daniel Parr in the end zone for a safety. He later combined with Bradley Clement to sack Driskel.

Tracking the Depth Chart: Fourth-string quarterback Steven Frank wasn’t present for Wednesday’s practice. “He was not here and that’s all I can say,” FAU coach Lane Kiffin said. …FAU continues to swap personnel freely along the defensive line. At several points on Wednesday defensive end Leighton McCarthy worked with the unit battling the first-string offense.

Newcomer Watch: Auburn transfer John Franklin did not attend practice on Wednesday but is expected to arrive on campus at some point on Thursday. Franklin announced on Tuesday via Instagram that he planned to transfer for FAU.

QB Battle: FAU regularly runs a drill where the offense has the ball deep in its own territory and less than 4 minutes remaining. The object is for the offense to pick up enough first downs to run out the clock. On Wednesday, the Parr-led offense accomplished that. …For the third consecutive day De’Andre Johnson spent most of the scrimmage and seven-on-seven portions on the sideline, while Driskel and Parr alternated with the first string.

Instant Message: “We’ve got to start figuring out who we are going to play, probably by the end of Saturday. This will be a big couple of days, here.” – FAU coach Lane Kiffin. 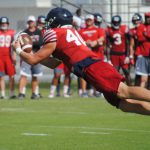