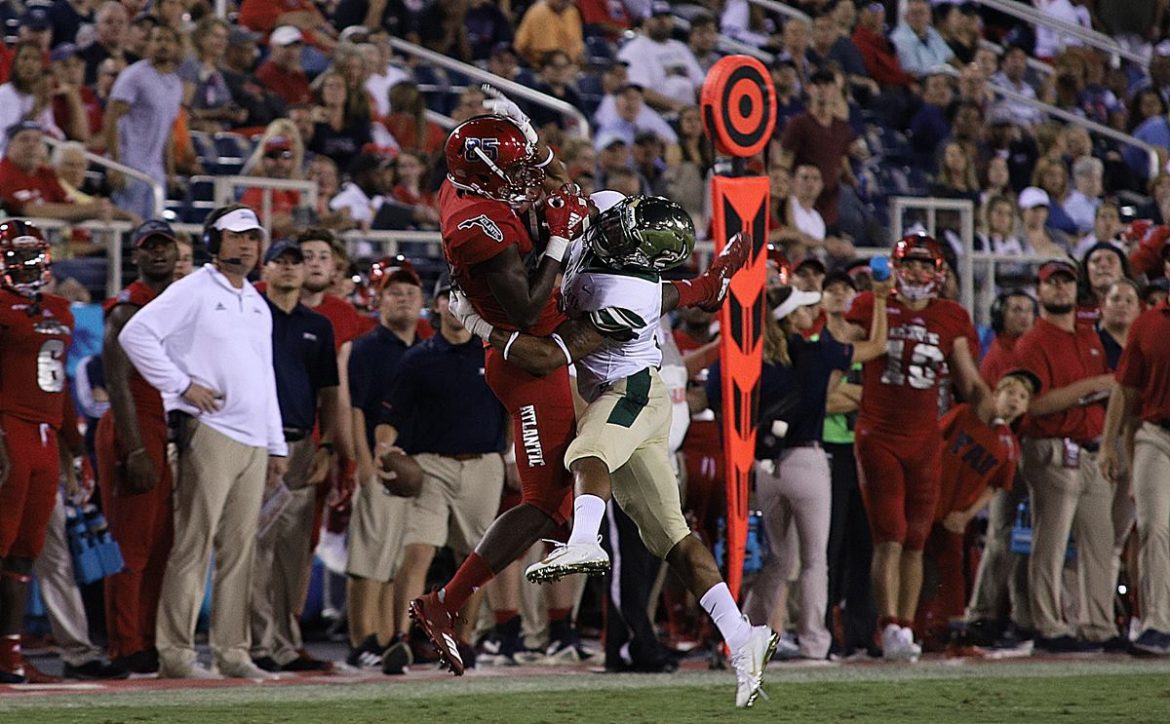 BOCA RATON – As fall camp progresses John Mitchell hopes to spend less time between his own ears and more time in the end zone.

The redshirt junior wide receiver believes he spends too much time thinking on the field – and that’s only slowing him down.

“I feel like if you haven’t seen me making big plays it’s because I get in my own head a lot and I kind of hold myself back from what I know I can do,” Mitchell said.

At 6-foot-4 and 220 pounds, the speedy Mitchell has all the tools needed to be an impact pass catcher, but he’s yet to consistently prove a reliable target.

Mitchell says the blame falls on him.

“It’s not that I’m down on myself,” Mitchell said. “It’s that I kind of doubt myself with each step, if that makes sense.”

Overthinking his play hasn’t always been an issue for Mitchell.

He never noticed the mental aspects of the game before arriving at FAU.

“It’s a new scene,” Mitchell said. “There are older people. There are people watching, cameras all over the place. It’s big. It’s cool, but it’s like, alright, now I have to do something better than what I’ve done before. You lose yourself and get out of your game.”

FAU coach Lane Kiffin deliberately attempts to develop confidence in players like Mitchell that augment their physical skills, knowing such a boost in one player can benefit the team as a whole on fall Saturdays.

“I think confidence is really fragile, so you try to put them in positions, that’s why sometimes we do certain drills that are for the success of one side of the ball,” Kiffin said. “Or maybe with a certain player try to feature him versus certain coverages he can get open – things like that. The more they can feel confident that the stuff is going well, especially when they can make the plays in scrimmage, in all formats, I think the confidence just grows.”

And his confidence is growing.

“My teammates, my coach, coach DJ [McCarthy] has really helped bring that out,” Mitchell said. “It’s just a matter of going and doing what you know you can do.”

Mitchell caught six passes for 62 yards and a touchdown as a true freshman in 2016 but missed all of 2017 after undergoing back surgery. He ascended the depth chart late last season but still only notched six catches for 66 yards in part because of his inconsistency.

“It’s really not a hard thing to fix,” Mitchell said. It takes just practice and repetition.”

He maintained that spot through summer and into fall.

“You just talk to a lot of people and you ask what it takes to be successful and they all kind of give you the same answer – it’s just knowing that you can do something and then you go do it, and it almost becomes easy.”

“Sometimes all it takes is one good catch and a couple high fives, and you’re like, alright, I’m ready. I’ve got this,” Mitchell said.

Lightning wreaked havoc with FAU’s practice on Monday, sending the Owls back to the locker room before they advanced far enough on the day to enter the most important full-team periods. Three times the Owls attempted to re-take the field only to have lightning send them back inside the Oxley Center a mere minutes later. Ultimately Kiffin elected to cancel the second half of practice. The good news is that Monday’s outing counts as a practice, allowing FAU to don full pads on Tuesday for the first time this spring. 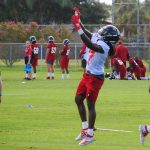 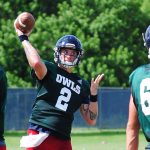