BOCA RATON – Like many of his FAU teammates, running back Buddy Howell is learning he might have an addictive personality.

And there doesn’t seem to be a support group for the cause of his problem – a mistress so potent that she’s spreading herself throughout the Owls’ locker room.

“It’s like, getting addicted to winning,” Howell said. “That’s the feeling that you want to have – that winning feeling, so you don’t want to lose. Like, losing is not acceptable, that should never be acceptable. When you get addicted to winning it’s just a whole different environment, a whole different tempo, and everybody’s buying into what we do. When everybody’s dialed in and buying in to what we preach and what we work on day in and day out it only gets better.”

A senior, Howell hasn’t grabbed much fuel for his addiction during his time at FAU. All three of his previous seasons concluded with a 3-9 record.

Life’s different now. Winners of consecutive games and three of their last four, the Owls have already matched those win totals from the previous seasons.

“Everyone has confidence,” wide receiver John Franklin said. “We know what we can do because we put it on film. It’s an expectation now, so now it’s not a surprise to everybody. It’s expected of us.”

Consecutive wins will boost the energy of most any team, but they are more meaningful to FAU than most teams because recent years have seen so few back-to-back wins.

When North Texas (4-2, 3-0) enters Howard Schenllenberger Field on Saturday the Mean Green will face an Owls’ team looking to win three consecutive games for the first time since 2013.

“We feel more confident in what we do now,” senior wide receiver Henry Bussey said. “It feels good because we know that we worked so hard for this.”

Saturday’s contest is a battle of two division leaders in Conference USA. FAU, (3-3, 2-0) fields its best team since joining Conference USA in 2013. In years past FAU players gave lip service this late in the season to the idea they were still playing for a Conference USA title.

“Me and Nick Internicola, we talk about it,” redshirt senior defensive end Haiden Nagel said. “Even before the season I’m like, we feel really good about it. I’m ready for it, bowl eligibility and conference champ. We were always talking about that before the season and even during the season now. But it’s really more focusing each game right now.”

The next step toward a Conference USA championship would be a win on Saturday. FAU hasn’t won four games in a season since 2013, but that elusive fourth victory isn’t being treated like a glass ceiling through which the Owls must burst.

“I had not thought about it that way – that it’s more than they’re used to,” first-year coach Lane Kiffin said. “Obviously that would not be a goal to just have four wins.”

The goals, of course, are six wins – which brings bowl eligibility – and eight wins, which would put FAU in the Conference USA Championship game.

“Being a South Florida native, FAU hasn’t really been one of the good teams for a long time,” said Franklin, who began his career at Florida St. and played at Auburn before transferring to FAU for his final season. “Knowing that, being from here, now that I am part of it I can see things starting to change. You can see from the beginning of the season, each week we’ve improved. We might not have won in the early part of the season but we’ve improved on little things and now you can start seeing that confidence getting us on a roll.”

And that confidence, drawn from winning, often begets more winning.

“I love to win,” wide receiver Pico Harrison said. “Winning is fun to me.” 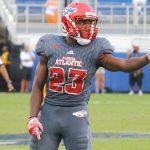