Sharing the Love
FAU strength and conditioning coach Wilson Love is a bundle of sound and energy. In this video, FAU players do their best to imitate him.

If Buddy Howell needs some help waking up for morning workouts, he can always count on Wilson Love, the FAU strength and conditioning coach.

Of all the actors on FAU’s practice fields this spring, Love’s sideline antics have made him the most noticeable.

Player’s refer to Love as an animated bottle of five-hour energy. Love’s passion is one of the reasons he became one of new coach Lane Kiffin’s first hires.

As he often does, Love made a lasting first impression on Kiffin, who came to FAU after serving as the offensive coordinator for the Alabama Crimson Tide.

Kiffin: He was headbutting linemen without a helmet.

During the early days of his coaching tenure, Kiffin took advantage of Love’s fervor by sending him on the recruiting trail.

Once spring practice opened, Love’s energy level turned hyperkenetic. FAU fans who attend Saturday’s spring game will immediately be drawn to the bouncing, arm-flailing, screaming Tasmanian devil of a coach on the sidelines.

Believe it or not, even with all his quirks, Love isn’t as easy to imitate as you might think

WOODS : The tip is going crazy

It’s not easy to match Love’s constant movement. He probably does more jumping jacks on the sideline during one practice than most people do in a lifetime.

Love’s vocabulary is, shall we say, colorful. Some would argue he invents language on the fly.

And then there’s the barking. Yes, like a dog.

FAU players have their fun with Love, who because of Kiffin’s policy forbidding assistant coaches from doing interviews, wasn’t able to bark up close and personally for this feature.

But in the weight room he’s all business. His dedication – along with his unique personality – are a couple of the reasons FAU players believe they will be stronger as a team in 2017.

ROSE: He makes us better.

Sharing the Love
FAU strength and conditioning coach Wilson Love is a bundle of sound and energy. In this video, FAU players do their best to imitate him.
was last modified: April 23rd, 2017 by Chuck King
0 comment
2
Facebook Twitter Google + Pinterest 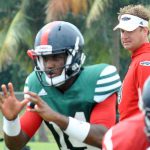