BOCA RATON — Known for his defensive prowess, the first play Trey Hendrickson made on the night came on offense – a block that opened the path for a touchdown.

But after four years in a Florida Atlantic uniform, time has proved that regardless of the magic Hendrickson creates, the rest of the team will struggle to follow.

After an emotional senior night ceremony where Hendrickson was among several honored in their final home game, the star defensive end couldn’t help but watch as the Owls saw their second winning streak under Charlie Partridge snap with a 42-24 loss to Old Dominion.

In what has become a familiar pattern, FAU once again couldn’t answer the whistle for the second half.

“Situationally, you come out, you do what you gotta do in the first half and you get too comfortable,” Buddy Howell said. “You don’t have that same aggressive attack style – and that’s what got us in the second half.”

Old Dominion quarterback David Washington tore up FAU’s secondary, which was starting to come into its own, throwing for 416 yards and five touchdowns in the Monarchs’ seventh win in their past eight games.

With the loss, the Owls now fall to 3-8 on the year and 2-6 at home. It will take a win next week against Middle Tennessee to prevent FAU from going 3-9 for the third straight year in the Partridge era.

“At one point, it was a four point game and we had a third down stop, but we unfortunately had a penalty call for a hands to the face on one of our defensive lineman,” Partridge said. “It was a bad break that they were able to finish that drive and turn into an 11 point game. We could never recover.”

The Owls’ blowout defeat was a disappointing end to a great week for Hendrickson, who earned an invitation to the East-West Shrine Game on Friday. Hendrickson will play in his final collegiate game for FAU next week when the Owls travel to Middle Tennessee.

Despite the night dedicated to the seniors, it was freshman Devin Singletary who yet again stole the offensive show for the Owls. Singletary rushed for two more touchdowns as part of his 89 yards – only the second time since Oct. 15 a defense held the true freshman under 100 yards.

Since the 52-3 loss against Western Kentucky on October 29th, Singletary has rushed for 486 yards in three games.

The sudden development of the American Heritage product has not only allowed Buddy Howell to get rest instead of being forced the ball on nearly every play, but has opened up the Owls’ offense in an entirely new way.

As the Monarchs’ defense clamped down in the second half, however, the Owls struggled to get anything going, turning the ball over on downs twice.

“We just didn’t execute – we looked like a tired team and they just had more energy than we did – and we can’t let that happen,” said wide receiver Kalib Woods, who continued his breakout season with 120 yards on Saturday night.

The Owls set the tone early with a 12 play, 57 yard drive where Howell, who only had four carries a week ago, set an FAU single-season record with his 12th touchdown of the year.

“I didn’t really think about [breaking the record] – it’s just day in and day out,” Howell said. “I see it getting broken soon, over and over again, so I’ll look forward to that. I’m glad it happened, but I’m just looking towards the future.”

Singletary might be the one who breaks it – and sooner rather than later. The man nicknamed “Motor” also added goal line scores from the two and five yard line within an eight minute stretch in the first half, giving him nine on the season.

His next rushing TD will allow him to join Alfred Morris, Charles Pierre, and Howell as the only four in program history with double digit rushing touchdowns.

Coming off a performance against UTEP that as arguably the best of his career, Jason Driskel threw for 219 yards and completed 56 percent of his passes, but was held without a touchdown for the sixth time this year.

Redshirt freshman Daniel Parr once again failed to create an momentum on his lone drive of the night, failing to complete a pass.

Turning Point
Even after missing a field goal to end the first half, Old Dominion failed to let that rattle them and came out striking to start the third quarter, tying the game less than four minutes into the quarter when David Washington threw a touchdown pass and rushed for a two-point conversion. After that, the Monarchs never needed to look back and proceeded to blow the Owls out over the final 26 minutes.

Key Stats
2 – Home wins for FAU in 2016, with only one of those coming against an FBS team.

3 – Fourth down conversions on three tries by ODU.

12 – Tackles by FAU linebacker Azeez-Al Shaair to lead the Owls.

416 – Passing yards from Washington, a career-high.

Up Next
The Florida Atlantic Owls step onto a football field for the final time on Saturday, facing Middle Tennessee. Kickoff is slated for 5:30 p.m. in Murfreesboro. 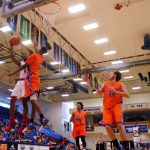