Cold as Ice
One prominent high school coach didn't like the way FAU coach Lane Kiffin ignored a commit so he refused to help the Owls recruit his players.

Lane Kiffin’s decision to ignore a high school recruit who committed to FAU during the Charlie Partridge era prompted one national powerhouse high school to stiff-arm the Owls, keeping them from recruiting other players at that school.

Miami-Booker T. Washington coach Tim “Ice” Harris told Kiffin during a phone call in early January that he wouldn’t discuss any other Tornadoes players until the Owls clarified what they planned to do with linebacker Isaac Readon.

As a result, Harris said, he hasn’t discussed any of his players with the new FAU regime since the coaching change.

Kiffin “was calling about another kid and then he said they hadn’t evaluated (Readon) yet and they didn’t know if they were going to get him or not,” Harris said.

A well-respected coach who’s won three state titles, including the high school national title at Booker T. Washington in 2013, Harris is currently in his third stint as the Tornadoes coach. He didn’t like Kiffin’s answer.

So Harris took a stand.

“I had no comment on other players,” Harris said. “I wanted to make sure we cleaned up the problem with (Readon) first.

What angered Harris the most was that Readon had elected to stick with FAU through the chaos of the past few months.

Readon committed to FAU in August. After firing Partridge, athletic director Pat Chun kept the assistants on staff to handle recruiting during the coaching search. Harris said those coaches assured Readon his commitment would be honored.

For months, Harris said he shielded Readon from other school’s recruiters.

“We kept everybody else away from him because that’s what he wanted,” Harris said. “He got left at the alter, now we have to scramble around and try to place him with someone else.”

Kiffin never did directly inform Harris or Readon that the scholarship was no longer available, electing to send assistant coaches instead.

That happened about 10 days ago.

By the time word filtered through college recruiting circles that Readon was back on the market, Harris said most of the teams originally interested in him had full signing classes.

Harris said several Conference USA schools offered to grayshirt Readon, which would keep him from enrolling until next January. That didn’t excite Readon, who said on Monday that he planned to sign with either Virginia Union or Hampton on Wednesday – National Signing Day.

Harris emphasizes that in recent years Booker T. Washington has worked to build a relationship with FAU, having their coaches attend clinics and their players participate in camps.

He wants that relationship to continue.

“Unfortunately, this is a rocky one we are starting of with,” Harris said. “Not saying it can’t get fixed, but it didn’t start well.”

During those visits Harris said he enjoyed talking football – Xs and Os – but held to his pledge not to discuss players.

“They are smart guys,” Harris said of FAU’s assistants. “We want to be able to learn from them and be able to teach our student athletes.”

“I guess for them it’s a business,” Harris said. “For me it’s about the student athletes.” 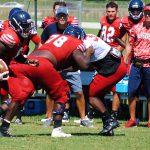