Photo Gallery:
FAU vs Navy
From the Owl Walk to the post game, our camera was there to capture Lane Kiffin and your favorite FAU players. Enjoy the gallery.

BOCA RATON – FAU opened its season with a 42-19 loss to Navy. Despite the loss, it was a big day for the Owls.

Friday marked Lane Kiffin’s official debut as FAU’s football coach. We were there when Kiffin stepped off the bus, followed him to the field and grabbed as many shots of FAU players as we could before the sun set.

Once the game began, we focused primarily on video, which you’ll find below. Nearly three hours worth of weather delays made for a long night, with the Owls playing until nearly 2 p.m.

More than usual, the fans played a major role in this game. With the attendance announced at more than 28,000, it was the third largest crowd in Howard Schnellenberger Field history. The most entertaining section of the stadium was the closed end zone, where the students could be found. We have a separate gallery featuring the students on our Facebook page. Don’t forget to “like” us.

For now, enjoy this team gallery. Hopefully your favorite player is in there. 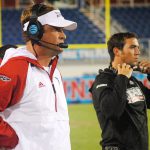