Number of the
Beast: 91-99
We go heavy on defensive linemen, including a player who's name is on an award, as we complete our series of the best players to wear each number at FAU.

Haiden Nagel records one of his eight tackles on Saturday against Southern Illinois. (Photo by Bongo)

We’ve reached the end. It’s the final installment of what has been an entertaining and enlightening series. When with the Seattle Seahawks, running back Marshawn Lynch brought to sports the term “Beast Mode,” using it to describe a state of play in which his inner beast takes over performance, leading to super-human feats on the field. To help get FAU fans through the summer doldrums while also offering a trip down memory lane, we’ve undertaken our Number of the Beast series aimed at determining the best football player to wear each number for FAU. The Beast at some numbers is easy to define. Taming the Beasts at others is more difficult than FAU fans might think. Here are numbers 91-99.

91. Martin Wright, DE/LB 2010-13. One of the most athletically gifted Owls ever to play the defensive line, Wright tallied 112 tackles during an FAU career that would have been more prolific had he not been injured so often. The story of how Wright joined the program is worth the selection alone. Ten of Wright’s 17.5 tackles for loss were sacks. His six sacks in 2013 are tied the fourth-most in a season by an Owl, while the 49 yards lost during those sacks are the third most in a season. Wright ended his career wearing No. 5.

92. Jervonte Jackson, DL, 2005-08. Twice a second-team All-Sun Belt selection before becoming a first-team choice in 2008, Jackson is credited with 153 tackles during his career. He made 13.5 of those tackles in the backfield – 6.5 of them being sacks. Jackson signed a free agent contract with Philadelphia after graduating. He gets the spot, barely, over Kevin Cyrille, who made fewer tackles but had more TFLs, and Yrvens Guerrier’s 88 tackles and six sacks.

93. Jarvis Givens, DT, 2007-11. Recorded 65 tackles, including 11.5 for loss. Statistics would have been more impressive if not for a neck injury that limited his 2009 season. Still, Givens easily gets the call over E.J. Jones and Brett Konchak.

94. Teddy Strachan, 2001-04. The 2002 Most Improved Player award winner for FAU tallied 84 career tackles, with 17 of them being for a loss. Current Owl Hunter Snyder could claim this spot in the coming months. A redshirt junior, Snyder recorded five sacks in 2015 before injuries limited last season. He needs only 28 tackles to catch Strachan.

95. Josh Savidge, DL, 2005-09. Savidge recorded 85 tackles, 5.5 of which were sacks, while helping the Owls to two bowl games. Not much to choose from here. Mark Chase and Joe Henry warranted consideration. Nick Richardson currently wears No. 95.

97. Josh Pinnick, DL, 2003-07. Pinnick’s 11.5 tackles for loss is tied for sixth most for an FAU player in a season. He’s credited with five sacks that season, one that ended with Pinnick being a named to the Sun Belt All-Conference team. Pinnick ended his career with 74 tackles, 16 of them being for loss. That allows Pinnick to beat out three-year letterman Jason Pugh.

98. Robert St. Clair, DE, 2005-08. St. Clair’s 97 career tackles are the most at this spot, as are his 18.5 tackles for loss. He recorded five tackles, two for loss, in the Owls’ New Orleans Bowl victory. St. Clair also claimed the Owls’ Most Improved Award in 2005. A knee injury limited St. Clair. Jamere Johnson and his 88 tackles are close to St. Clair, and with a good season this year Haiden Nagel (pictured) can claim the spot.

99. Ramon Rickards, DL, 2000-04. Known for his big hits, Rickards’ 15.5 career sacks are the third most in FAU history. His 26.5 tackles for loss are sixth most. Rickards died in a motorcycle accident in 2006 and FAU now presents the Ramon Rickards Bone Award to the player who delivers the biggest hits.

Number of the
Beast: 91-99
We go heavy on defensive linemen, including a player who's name is on an award, as we complete our series of the best players to wear each number at FAU.
was last modified: July 14th, 2017 by Chuck King
0 comment
1
Facebook Twitter Google + Pinterest 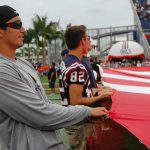 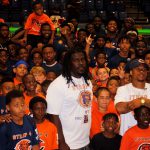