Number of the
Beast: 61-70
Heavy on the offensive linemen, but the first FAU player to ever sign an NFL contract is included in this installment of FAU Number of the Beast. 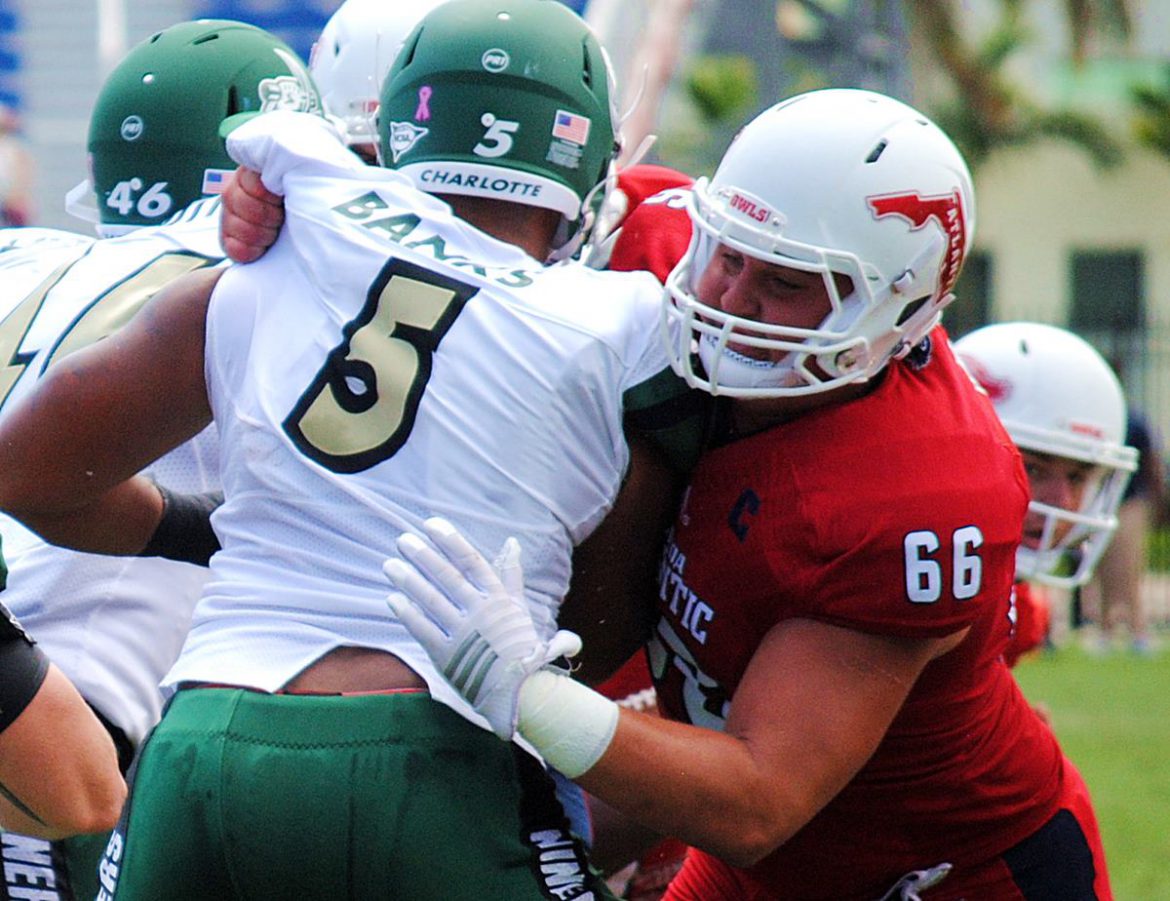 We’ve entered the second week of our FAU Number of the Beast series and for the next couple days we’ll be probing the trenches. When with the Seattle Seahawks, running back Marshawn Lynch brought to sports the term “Beast Mode,” using it to describe a state of play in which his inner beast takes over performance, leading to super-human feats on the field. To help get FAU fans through the summer doldrums while also offering a trip down memory lane, we’ve undertaken our Number of the Beast series aimed at determining the best football player to wear each number for FAU. The Beast at some numbers is easy to define. Taming the Beasts at others is more difficult than FAU fans might think. Here are numbers 61-70.

61. Brian Pare, LS, 2002-04. Ardent FAU supporters know that Pare was the first former Owl ever to receive an NFL contract, joining the Chicago Bears for 2004 camp. A Boca Raton-Spanish River grad, Pare started his college career at LSU before transferring closer to home. Pare didn’t have much competition for the top spot at No. 61. Offensive lineman Eric Minemyer started a handful of games in 2014.

62. Bryan Beck, OL, 2015-current. Beck isn’t exactly rewriting the FAU record book yet – he hasn’t been in Boca Raton all that long – but he’s already been the best No. 62 in program history. After redshirting in 2015, Beck became a starter at tackle last season when injuries depleted the offensive line. Following the season he underwent his second knee surgery in as many years but is expected back for fall camp. Peter Pantelakos, who wore 62 from 204-07, is probably runner up here.

63. DeAndre Williams, OL, 2009-13. Key member on the offensive line during the Carl Pelini era. Williams earned an invite to Washington Redskins camp following his final season. He takes the spot over Antes Perkins.

64. George Guffey, OL, 2000-04. Center on the 2003 team that reached the FCS semifinal game, Guffey was one of the toughest competitors ever to put on the FAU pads. Played part of that 2003 season with a broken hand. Named an FCS second-team Independent All-Star. Guffey gets the spot over Kevin Miller. Antonyo Woods, the current owner of No. 64, has the opportunity to claim this spot as his own.

66. Dillon DeBoer, OL, 2012-16. The only Owl to start every game last season, DeBoer held together an offensive line decimated by injury. He played center, guard and tackle during his time at FAU. The Owls named him their offensive MVP following the 2016 season. He signed a free agent contract with the Los Angeles Chargers.

67. Dalton Schomp, P, 2013-16. Schomp led the nation in 2015 by averaging 48.0 yards per punt. That average dropped to 42.6 last season in large part because Ryan Rickel was no longer handling pooch punt duties. Still, Schomp’s 44.5 yards per punt is the best for a career at FAU. And he was an All-Conference USA selection in 2015 Offensive linemen Zachary Wichner and Ryan Houston both started games for the Owls. Houston won a Division III national title at Mount Union before transferring to FAU.

68. Chris Shepherd, G, 2001-04. Gifted athletically, Shepherd entertained teammates with his ability to do flips from a standing start. He became a starter midway through his freshman season and stayed there. Shepherd started 13 games during FAU’s run to the 2003 FCS semifinal game. Nick Paris is a close second here, but it shouldn’t take Paris long to get over not getting this call because…

69. Nick Paris, C, 2004-08. A weight room warrior, Paris moved from guard to center as a freshman and quarterbacked the offensive line there after. Paris snapped the ball to Rusty Smith during the Owls’ two bowl victories and was a second-team All-Sun Belt selection in 2008. Most will remember Paris as wearing 68, but he did wear 69 on the practice field during his redshirt season. Long snapper Morgan Barnett gets some consideration here.

70. Nello Faulk, OL, 2003-06. Like Paris, Faulk began his career wearing one number, 70, before switching to his more familiar 52. Faulk played as a true freshman and became a starter the following season. He possessed the athleticism to play both tackle and center. Grew into a leadership role on the offensive line and was an All-Sun Belt selection in 2006. He gets the nod over Lavoris Williams.

Number of the
Beast: 61-70
Heavy on the offensive linemen, but the first FAU player to ever sign an NFL contract is included in this installment of FAU Number of the Beast.
was last modified: July 17th, 2017 by Chuck King
0 comment
1
Facebook Twitter Google + Pinterest 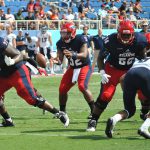 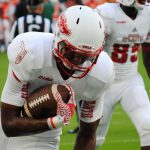