Number of the
Beast: 21-30
A run of cornerbacks, a pair of competitive brothers and two current players featured as we name the best FAU players to wear Nos. 21-30. 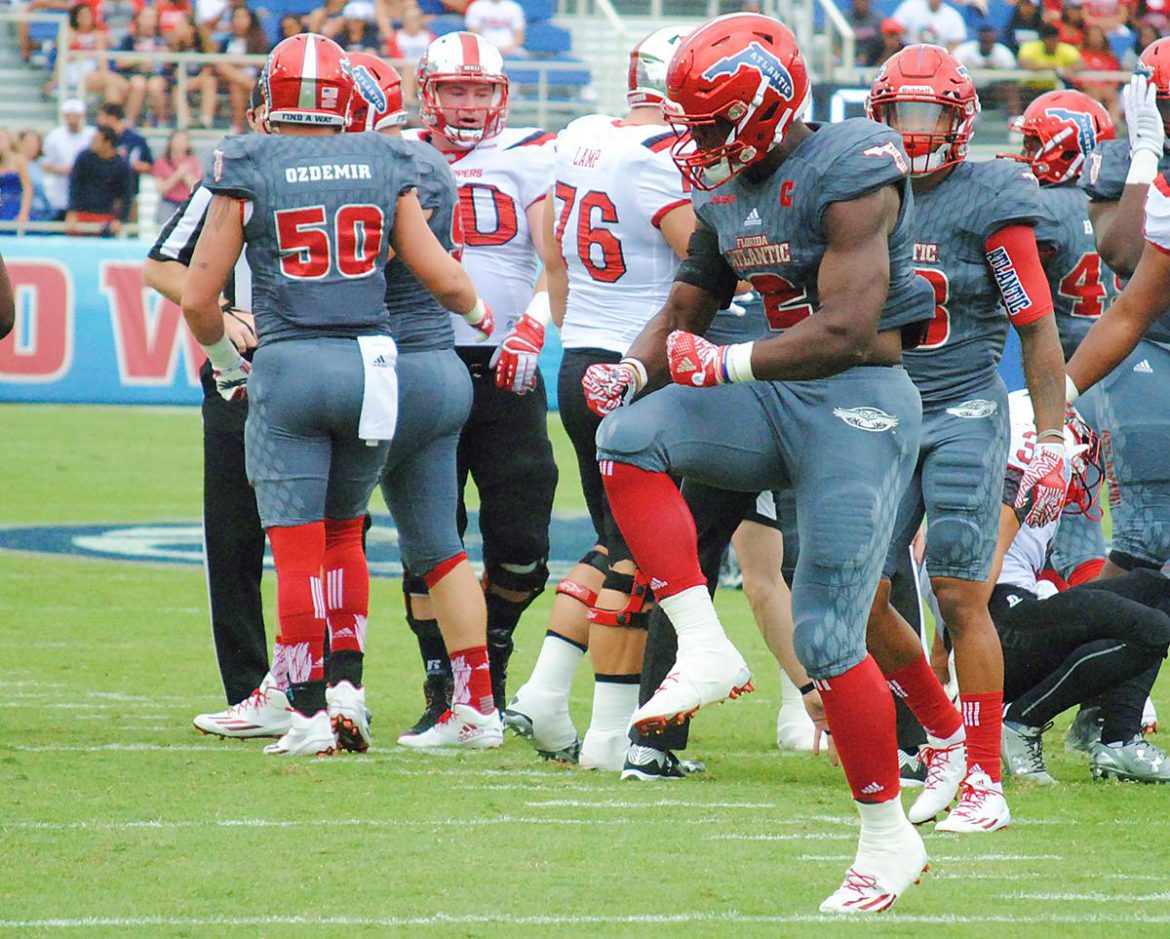 As a member of the Seattle Seahawks, running back Marshawn Lynch brought to sports the term “Beast Mode,” using it to describe a state of play in which his inner beast takes over performance, leading to super-human feats on the field. To help get FAU fans through the summer doldrums while also offering a trip down memory lane, we’ve undertaken our Number of the Beast series aimed at determining the best football player to wear each number for FAU. The Beast at some numbers is easy to define. Taming the Beasts at others is more difficult than FAU fans might think. Here are numbers 21-30.

21. D’Joun Smith, CB, 2011-14. FAU’s Defensive Player of the Year in 2014 and an All-Conference USA selection in 2013 and 14, the nine interceptions grabbed by Smith in his career are tied for fourth among Owls. Smith’s 29 career pass break-ups are second most at FAU. Smith is also fourth on FAU’s all-time kick return yardage list. Drafted in the third round by Indianapolis, Smith is currently a member of the Tennessee Titans. He has a ways to go, though, to become the FAU player with the longest professional career. That honor goes to former DB Erick McIntosh, who is in his seventh year as an arena football league player. E-Mac also wore No. 21.

22. Lawrence Gordon, CB, 2002-05. Flash’s 11 pass break-ups in 2005 are tied for the second most in a season at FAU. He also picked off three passes during his FAU career before moving on to the Canadian Football League. It was tempting to put former RB Trey Rodriguez here. In his lone season at FAU Rodriguez rushed for 419 yards and a team-high five touchdowns. Now at Marshall, FAU will try to contain Rodriguez on Nov. 3 when the Thundering Herd come to town.

23. Raekwon Williams, CB, 2014-current. Williams enters his senior season with 83 career tackles and one interception. Coaches expect Williams to be a lockdown corner this season. Williams didn’t have much competition at this number. Maybe Winfred Strickland is next on the list?

24. Willie Hughley, CB, 2001-05. Hugley is FAU’s career leader in interceptions (15) and interception return yards (386). He returned three of those interceptions for touchdowns, which is also the most in program history. Hughley returned an interception for a TD and recovered a fumble in FAU’s win over Northern Arizona in the 2003 NCAA FCS playoffs. The Cleveland Browns invited Hughley to their camp.

25. Taheem Acevedo, S, 2003-2007. We continue a run of defensive backs with another player tied for fourth in career interceptions with nine. Five of those interceptions came in 2007, helping FAU reach its first bowl game. Acevedo also recorded 80 tackles that season. He was a second-team All-Sun Belt performer in 2006. Former running back Jay Warren couldn’t mount a senior season that could have displaced Acevedo at this spot. Current Washington Redskin Tevin Homer also wore No. 25 – primarily as a special teams preformer.

26. Corey Small, CB, 2004-08. Small ranks second on FAU’s career list with 13 interceptions. That alone qualifies him for the top spot at a number that hasn’t seen much production for FAU. Small’s 18 tackles in a 2007 loss to Kentucky is tied for the FAU single game record. A 2007 second team All-Sun Belt selection and a member of the first team the following year, Small could ball, and will be difficult to knock off this list.

27. Bartels, S, 2004-11. Brothers Kris and Marcus made the Bartels the first family of FAU football. Kris, the Owls’ 2006 defensive MVP, recorded 220 tackles and intercepted three passes – returning two for scores. Marcus joined the Owls in 2008 and added 297 tackles – third most in FAU history – to the Bartels legacy. Marcus twice surpassed the 100 tackle mark in a season. The five fumbles recovered by Kris are third most in program history. Marcus shared the 2011 Team MVP award with Alfred Morris. Not bad for two brothers who came to FAU as walk-ons. Kris now serves as the analyst on ESPN West Palm’s broadcasts of FAU football games. We’re not going to choose between the two. We’ll let Kris and Marcus, both fierce competitors, fight it out during Thanksgiving dinner. We’re hoping to get broadcast right for that event. In an unrelated somewhat surprising stat, running back Jonathan Wallace’s 61.8 rushing yards per game is the fifth best per-game average in FAU history. As you might have guessed, Wallace wore No. 27.

28. Azeez Al-Shaair, LB, 2015-current. The sophomore is coming off a season in which he recorded 113 tackles – the fifth best such season in FAU history. He’s totaled 207 tackles in two seasons. Al-Shaair is on pace to leave FAU as the Owls’ all-time leading tackler. He’s actually close to passing Brandon Bryant as the best player to wear No. 2. For now, Al-Shaair gets the nod over RB Willie Floyd at No. 28.

29. Sharrod Neasman, S, 2013-15. A walk-on who earned a scholarship along with a mechanical engineering degree, Neasman recorded 139 tackles and picked off five passes during his time as an Owl. FAU’s 2015 student athlete of the year, Neasman signed with the Atlanta Falcons and became the first former FAU player to play in the Super Bowl. It’s worth noting that former safety Jerrell Terry, who also wore No. 29, recorded 18 tackles of his 148 career tackles at Eastern Illinois in 2002. Tougher decision than originally thought, but Neasman, a team captain as a senior, gets the nod.

30. Andy Rosas, P, 2001-03. Sophomore tight end John Raine could quickly usurp this spot, but for now we’re going with FAU’s first punter. Rosas’ 7,713 career punting yards trail only Mickey Groody. He also made two of four field goal attempts during FAU’s first year. Punters don’t usually make lists like these, but if Chris Laskowski served as Rosas’ workout partner in the weight room, that’s all the proof needed that this guy was tough.

Number of the
Beast: 21-30
A run of cornerbacks, a pair of competitive brothers and two current players featured as we name the best FAU players to wear Nos. 21-30.
was last modified: July 17th, 2017 by Chuck King
0 comment
1
Facebook Twitter Google + Pinterest 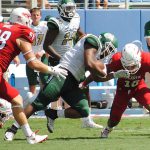 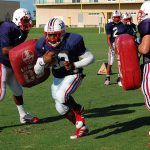