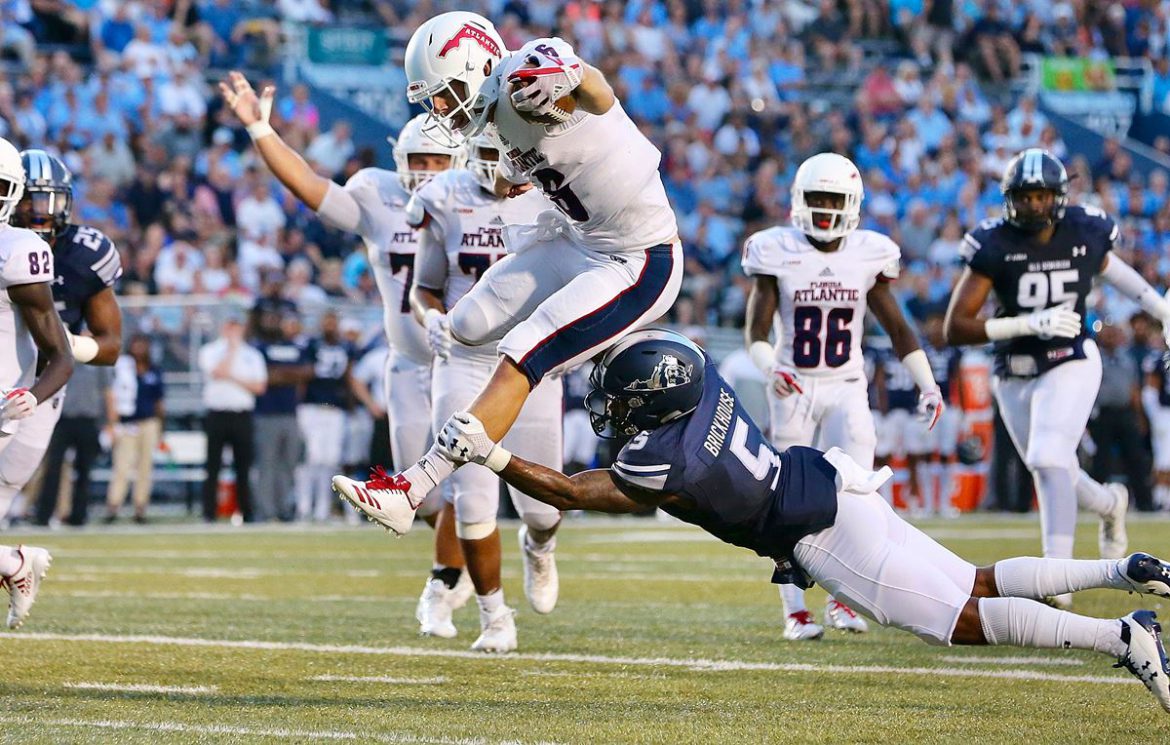 FAU QB Jason Driskel Hurdles into the end zone for the first of his four touchdowns against ODU.

The Owls’ quarterback rushed for 92 yards and tied a program-record with four rushing touchdowns to lead FAU to a 58-28 victory over Old Dominion in Norfolk, Va.

The four-touchdown performance marks the second time in as many weeks that an FAU player accomplished the feat. Devin Singletary scored four times in last week’s victory over MTSU.

The 58 points are the most scored by the Owls in program history. The eight touchdowns – all on the ground – were also a program record.

“It kind of felt like Navy out there,” said Lane Kiffin during the ESPN West Palm post game report, referring the ground-heavy Midshipmen attack. “It was good to see eight rushing touchdowns.”

Driskel, who took over as the Owls starting QB for Week 4’s loss to Buffalo, scored FAU’s first, fourth, fifth and seventh touchdowns of the game.

The victory leveled FAU’s record at 3-3 on the season and elevated FAU to the top of Conference USA’s East Division with the only 2-0 record in the division. FAU had never before started a C-USA slate with consecutive wins.

After three consecutive 3-9 seasons, FAU won the three times in its first six for the first time since 2007 – the year of the Owls’ only conference title and first bowl game.

“This team’s growing,” Kiffin said. “They are not making as many mistakes. When you do that, you have a chance to win games.”

FAU scored on its first three possessions of the night. Greg Joseph’s 20-yard field started the scoring. The Owls responded to a touchdown drive on Old Dominion’s first drive with their first touchdown drive of the game – culminating with Driskel’s 11-yard sprint up the middle.

Minutes later Devin Singletary raced into the end zone for his 10th touchdown of the season. The score broke a tie between Singletary and Doug Parker on the FAU career rushing TD list, moving the back nicknamed “Motor” into third place.

Driskel handled much of the rest. His 39-yard touchdown run late in second quarter allowed FAU to take a 31-14 halftime lead.

A seven-yard run midway through the third quarter followed an ODU (2-3, 0-1 C-USA) touchdown and killed any momentum the Monarchs had.

“If you are going to be a championship team you’ve got to put people away,” Kiffin said.

Driskel capped his night with a 35-yard touchdown run. He rushed for 92 yards on the night but only threw for 97, on 13-of-22 attempts.

FAU rushed for 452 yards on 69 carries, part of a 550-yard night of total offense. Singletary led the way with 194 rushing yards and two touchdowns. Buddy Howell followed with 109 yards and a score. 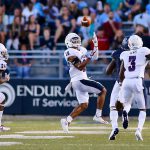 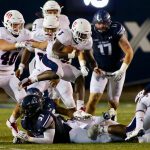