Defensive Play
Of The Year
Trey Hendrickson, Azeez Al-Shaair and Jacob Douglas all receive mention as being part of one of the FAU defensive plays of the year.

BOCA RATON – The maniacal play of Trey Hendrickson aside, FAU’s defensive unit struggled throughout most of the 2016 season. Only five teams allow more than the 39.8 points per game they have. Four teams surrender more yards. A quick search for memorable defensive plays didn’t yield many offerings. Joining our Chuck King and Jake Elman in offering their superlatives are three colleagues from ESPN West Palm: FAU play-by-play man Ken LaVicka, analyst Kris Bartels and producer (and host of OwlTalk) Brian Rowitz. Today we tackle the Defensive Player of the Year.

Kris Bartels (ESPN West Palm): Third down and four and UTEP tries a jet sweep to the left. Jacob Douglas got toasted on the same play earlier in the game, but does a better job making the running back bend the play further into the backfield. Just like Superman, Trey Henrickson flies in from nowhere to make a huge stop for the Owls. That play forced UTEP to punt after having the lead, 31-28. The Owls had to drive 96 yards in under 3 minutes. Kind of disappointing that this is the “Play of the Year”. For a team that had a ton of big plays in 2015, the 2016 defense looked sub par. At least this play gave the offense a chance to go down and win the game, instead of giving up a game winning play of their own.

Chuck King (OwlAccess.com): Frequently over the past three seasons FAU found itself in a position where one defensive stop could prove to be the difference between victory and defeat. Most of the time the Owls didn’t rise to that challenge. Against UTEP, they did. With FAU trailing by three late in the fourth quarter and the Miners facing a third-and-four, linebacker Jacob Douglas burst into the backfield to disrupt the UTEP sweep and Trey Hendrickson made the tackle for a loss, forcing a punt. FAU took advantage, marching 96 yards in the closing minutes for the winning TD.

Brian Rowitz (ESPN West Palm): Forced Fumble Against Charlotte. Not easy to pick a play here but am going to go with a huge play that almost resulted in an enormous win. With Charlotte on its way to running out the clock FAU Trey Hendrickson forced a fumble and then somehow came out of a pile with the ball, giving the offense one last chance. The offense took advantage of the opportunity but unfortunately for the Owls C-USA refs had other plans.

Ken LaVicka (ESPN West Palm): Azeez Al-Shair INT return for a TD against FIU. Al-Shaair, who had been relatively quiet from an “impact play” standpoint to that juncture of the season, gave FAU an immediate lift on the first play of the second half against Florida International, hauling an Alex McGough pass into his chest and racing into the end zone to give the Owls a two-score lead. Unfortunately for FAU, it would go for naught.

Jake Elman (OwlAccess.com): It all comes back to Trey Hendrickson on defense. With the game on the line against UTEP, the 2016 Conference-USA Player of the Year blew past two offensive linemen to record a tackle for loss and force the Miners to punt the ball back to FAU.

Defensive Play
Of The Year
Trey Hendrickson, Azeez Al-Shaair and Jacob Douglas all receive mention as being part of one of the FAU defensive plays of the year.
was last modified: January 13th, 2017 by FauOwlAccess
0 comment
1
Facebook Twitter Google + Pinterest 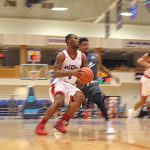