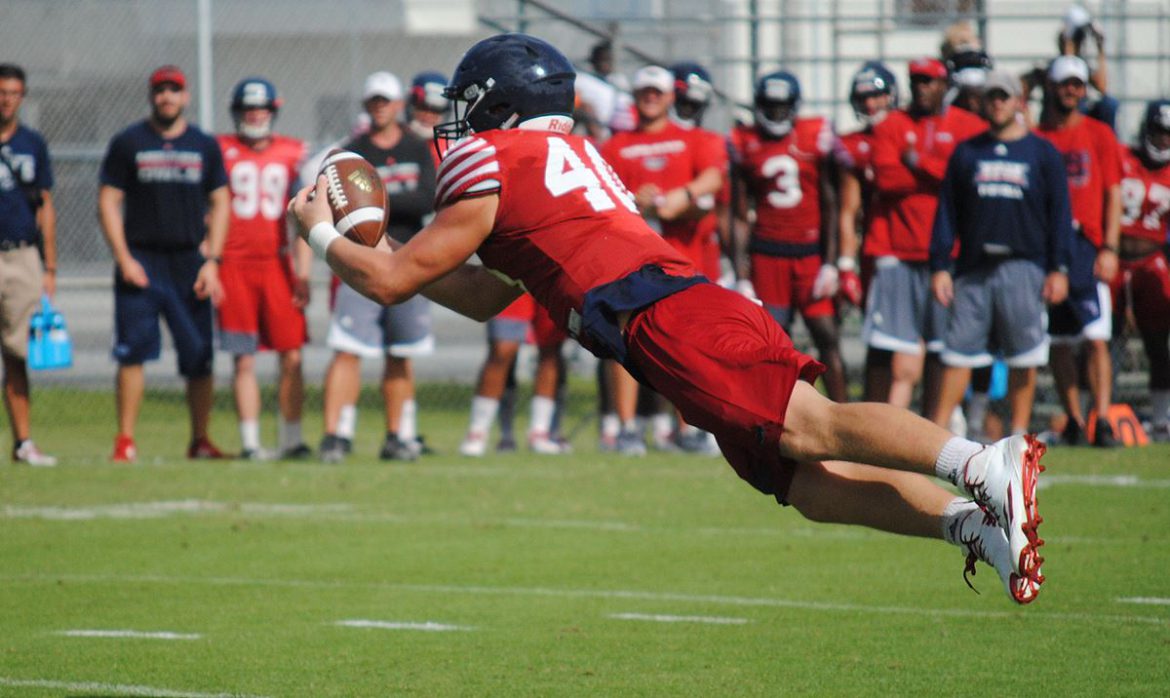 Harrison Bryant lays out to catch a touchdown pass during an FAU scrimmage at Hadley Park. (OwlAccess.com photo)

BOCA RATON – Running backs Devin Singletary and Buddy Howell can turn a crease into a long touchdown run – a threat Singletary made good on with a 70-yard TD run during the scrimmage portion of Wednesday’s practice.

At wide receiver, DeAndre McNeal, Henry Bussey, Willie Wright and Pico Harrison have all demonstrated the ability to make the gap from the 50-yard line to the goal line seem much smaller.

Inside the red zone? That’s where the tight ends perk up.

Harrison Bryant and John Raine spent the first three weeks of fall camp proving that quarterbacks who throw their way near the goal line will find receptive hands.

“We definitely lock in down there when it gets to that part of the field,” Raine said.

Both true sophomores who played significantly last season as true freshmen, Harrison has spent the majority of fall camp as the starter, with Raine being the 1B to Harrison’s 1A.

It hasn’t taken them long to acclimate to a new offensive scheme – and might be expanding the scheme by giving offensive coordinator Kendal Briles, who came to FAU from Baylor, more options.

“It’s different, but I feel like we’re increasing our role compared to the Baylor tight ends,” Bryant said. “We’re just doing what we can do to help the team win at this point.”

Listed at 6-foot-5 and 225 pounds Bryant has the bigger frame of the two, which gives him an advantage when a play calls for run blocking, or a chip and release into a pass pattern. Bryant praised Raine as “being a great route runner” who “can block, too.”

Their versatility and near interchangeability showed late in the Owls’ two fall scrimmages. In FAU’s Aug. 5 scrimmage at Hadley Park, Daniel Parr lobbed a pass to Bryant, who made a juggling catch in the end zone. One week later, during the two minute drill that closed FAU’s scrimmage at Howard Schnellenberger Field, Parr tossed a similar pass to Raine.

“He had the same exact play,” Bryant said. “That was awesome. That’s a cool play that we run that we feel like will work a good bit.” 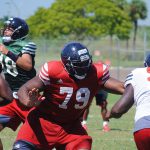 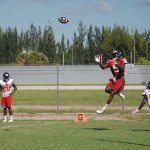 HARD KNOCKS at the OX: Ahoy