BOCA RATON — With FAU at risk of its sixth straight losing season, the time will come where fans start pointing fingers at what – or who – is behind another sub .500 showing.

At the rate things are going, it’d make sense to point more than one finger at the culprit: three-point shooting.

The lack of consistency from long-range, with the exception of sniper Gerdarius Troutman, has been one of the Owls’ main Achilles heels in the 2016-17 campaign. In a two game homestand against North Texas and Rice this past week, FAU tried 67 three-point shots – including a staggering 39 against the Mean Green – and made 16.

“The other night was too many, but I was careful not to say to them, ‘Hey, that’s too many threes’,” coach Michael Curry said after Saturday’s loss to Rice. “We just showed them the type of threes we wanted.”

Curry explained that the players weren’t doing enough of penetrating and kicking the ball back out, leading to poor shots that resulted in two close losses.

On paper, things don’t look awful as FAU currently ranks ninth in Conference USA with a .320 shooting percentage from three-point range. With 67 three-point attempts over the past two games, however, FAU has entered the Conference’s top five when it comes to three-point attempts; the Owls are now tied with Charlotte with 503 attempts.

Though Curry understands that the team has sometimes tried to do too much from long-range, he also knows that the talent of these shooters will lead to players taking those chances.

With matchups against Louisiana Tech and Southern Mississippi this week, the third and fourth highest teams in C-USA when it comes to three-point attempts, three-point records could be set on both sides.

Working Women: The women’s Owls team dropped both of their Texas contests, falling to North Texas 79-57 and Rice 89-55. Freshman guard Alexis Shannon stood out in both games as the leading scorer with 11 points versus the Mean Green and 13 against Rice. Shannon has scored at least 11 points in five of her last six outings and has started in five consecutive games. FAU will be back at The Burrow to face La. Tech on Thursday, Feb. 16 at 7 p.m. followed by Southern Miss on Saturday, Feb. 18 at 5 p.m. The La. Tech game will be 90s Night, and the Owls will don their pink jerseys to promote breast cancer awareness and National Girls and Women in Sports Day for the Southern Miss contest.

Game of the Week: In an ideal world for Louisiana Tech, they could end this week tied for first in Conference USA. It will be FAU who has to shut them down and end their four-game winning streak on Thursday night. Tipoff is slated for 7:30 p.m. 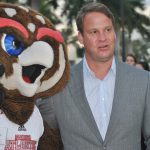