The Closer
FAU hoops still searching for a go-to guy late in games.

BOCA RATON — In Chicago and Los Angeles, Phil Jackson had Michael Jordan and Kobe Bryant. With the Heat, Erik Spoelstra had both Dwyane Wade and LeBron James. Even during his one season in Detroit, Michael Curry had Hall of Famer Allen Iverson.

But through the season’s first two months, Curry – now in his third season with the Florida Atlantic Owls – has yet to find a closer.

“Someone still has to emerge because in a lot of close games you can’t usually do it by committee,” Curry said after Saturday’s home win over the Florida International Panthers

Though not the case for every successful team, the same contenders every year in both collegiate sports and the pros all seem to have that one player who, when the time comes, starts playing like they’re in a video game where the difficulty has been lowered to rookie. Whatever area they excel at – scoring, defense, reading an opponent’s style perfectly – carries over to the rest of the team as they finish the game strong and come away with the win

Though not their biggest issue, that lack of a player who can wake up in the final few minutes and completely take over the game is one of several reasons why the Owls sit at 5-9 on the season.

Though Nick Rutherford and Frank Booker may have shown flashes of being that type of player in the December upset of the Ohio State Buckeyes in Columbus – Rutherford scored 11, including the game-winner, and Booker had 15 – neither have emerged as that much-needed closer.

Rutherford has shot .298 from the field since making a last-minute floater against Ohio State, while Booker has been relegated to the bench.

“You’ve got to know who you are going through,” Curry said. “That person hasn’t emerged yet on a consistent basis.”

With so many of the Owls’ losses coming down to the final minutes – Hawaii, Tennessee-Martin, and Hofstra all immediately come to mind – one really has to ask “what if” FAU had that Kobe Bryant-type player who caught fire when his team needed him most.

However, Curry also acknowledged that the team may not necessarily need that closer type if they can execute their plays well.

“We don’t have a dominant player but we’ve got good depth,” Curry said.

Conference Counterparts: FAU finally won a Conference-USA game, but the Owls are still behind undefeated Marshall and Middle-Tennessee. Standings aren’t the only interesting thing going on in C-USA, though… Marshall’s Jon Elmore leads in points (21.1) and assists (6.5) per game, making an early case for All-Conference. …FIU’s Michael Kessens is the only big man averaging double-digit rebounds, though Louisiana Tech’s Erik McCree is close with nine a game. …Nick Rutherford is still among the top 5 in C-USA when it comes to assists with 4.9 a game.

Working Women: The Lady Owls finally return to Boca this week, hosting the University of San-Antonio Roadrunners as FAU tries to break a four-game losing streak.

Game of the Week: Saturday’s road game against the University of Texas at El Paso Miners (2-13, 0-3) will be one that determines if the Owls can avoid playing directly at levels of inferior opponents. Rarely will a conference game in January against a dismal team be called a must-win, but if FAU wants to show Conference-USA that they’re for real, taking care of business against a struggling UTEP team is be a nice place to start. 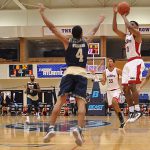