Road Warriors
FAU owns a three-game winning streak on the road, where the Owls play better this year.

BOCA RATON — When the New York Giants went on their Super Bowl run nearly a decade ago, the team was hailed as road warriors after upsetting each of their opponents either in away or neutral-site games.

The FAU men’s basketball team won’t ever be playing in a Super Bowl, but the Owls are at least making their own case for the ‘Road Warriors’ title.

Embarking on a three-game road trip that could potentially have been the final nail in FAU’s once promising season, the Owls responded with heart and hustle. After beginning the stretch with a dominant victory over FIU, Michael Curry’s team had a full week off before traveling to Charlotte and narrowly escaping North Carolina with a 77-75 win.

Saturday night, Justin Massey nailed a three-pointer with 49 seconds left to put the finishing touches on a comeback that began with the Owls down 15 in the second half. Despite Ronald Delph and William Pfister both fouling out, FAU made shot after shot – with Massey having 16 of his 18 in the final 20 minutes – to steal a 65-61 game away from the Monarchs.

“We believe in ourselves,” Massey said. “Maybe not many others do, but we believe that with the work we’ve been putting in and the group we have together that we can do special things.”

When FAU hits the road, they can indeed do special things. On the campaign, FAU is 4-5 in true road games – though the team did lose all three games of their season-opening trip to Hawaii. Their first road win came in the overtime thriller against Ohio State at the start of December.

After FAU lost against Marshall earlier in the season, Curry mused about why the team seemed to play better on the road than home and attributed it to FAU being able to feed off the opponents’ crowds.

With four road games left – two of which, Louisiana Tech and Southern Miss, will come later this month before FAU travels to UAB and Middle Tennessee to begin March – two more road victories would at least ensure a 10-win season for the Owls.

Conference Counterparts: Middle Tennessee continues to lead Conference USA, though their perfect 10-0 record ended with a loss to the surprising UTEP Miners. After starting their season off slowly, UTEP has won six of its last seven to rank fifth in C-USA. If FAU can beat North Texas and Rice this week, they could potentially jump into the top seven – or even higher, depending on how the rest of the conference’s higher powers fare.

Working Women: The FAU women’s team remains winless on the season in conference play, though Sasha Cedeno continues to impress on the floor. Cedeno led the team with 20 points in Saturday’s loss to Old Dominion. FAU will travel for C-USA games against North Texas and Rice this week.

Game of the Week: North Texas started the season with a 6-6 record. They’re 0-10 since conference play began and remain on an 11 game losing streak. When the Mean Green come to town on Thursday night, this is a game that the Owls should – and potentially need to – run away with, especially with red hot Louisiana Tech approaching on the schedule. 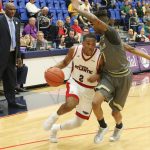