All-Defense Adonis
The defensive play of sixth-man and offensive spark plug Adonis Filer is often overlooked. It shouldn't be.

BOCA RATON — After nearly three years with Adonis Filer, the first of which he sat out in compliance with the NCAA’s transfer regulations, FAU coach Michael Curry has seen enough.

At least, Curry’s seen enough from the former Clemson guard to say the time is now for Conference USA to recognize the potent sixth man’s defensive prowess.

Some may scoff at the notion that a guard known more for his run-and-gun shooting style than dominating defense deserves to be recognized among the conference’s elite defenders, but those who have seen Filer play in person know he’s capable of major stops. Some of FAU’s best defensive performances, especially on the road, have come when Filer is at his best and pressuring opposing backcourts.

Reminiscing on the early days of recruiting Filer to FAU, Curry admitted that it was the guard’s defense that truly swayed him at the time more than his offense.

When it comes to traditional numbers regarding Filer’s defense in the 2016-17 season, the results are a mixed bag; Filer ranks seventh on the team in rebounds (74, or three per game) but is second in steals (24). The advanced statistics are a bit more friendly. With 0.7 defensive win shares, Filer narrowly trails Ronald Delph and Nick Rutherford (0.9 each) for the team lead.

The stats are obviously a large part of what helps the voters determine who makes what team, but versatility and how well defenders can handle tough situations is also important. Prior to FAU’s blowout loss to Louisiana Tech on Thursday night, Curry had mentioned that Filer – a 6-foot-2 guard – might have been an ideal choice to cover Erik McCree, the Bulldogs’ star big man and C-USA’s leading rebounder.

“Any time we get in a pinch, we can always put put Adonis on the forward because he’s quick enough and strong enough,” Curry said. “We just don’t want to have him on them every time.”

McCree had 11 points and eight rebounds in the Bulldogs’ 95-69 win.

Since joining C-USA prior to the 2013-14 season, FAU has never had a player make the All-Defensive team. Filer will have four regular season games left, as well as the C-USA tournament if FAU qualifies, to change that.

Conference Counterparts: If the season ended today, FAU would make the Conference USA tournament as the No. 10 seed and play UAB. With four games remaining in the regular season, FAU can clinch a berth in the C-USA Tournament with one more win along with a loss by North Texas.

Working Women: FAU will play its final two regular-season road games in Texas beginning with UTEP (6-20, 3-11 C-USA) on Thursday, Feb. 23 at 8:05 p.m. followed by UTSA (11-14, 7-7 C-USA) on Saturday, Feb. 25 at 3 p.m. Freshman Julia Jenike continues to be on fire, leading the team in points for the second consecutive game as she came away with 16 points – her fifth straight game with double-digit points – including two baskets from beyond the arc. Making her 14th straight start, the freshman guard added four rebounds and four assists in 32 minutes on the floor.

Game of the Week: For fans, Thursday night’s game against UTEP – a Greek Night that will pit sororities against one another – may seem more interesting, but it’s hard to argue against the Saturday night home finale vs. UTSA. Between senior night, a game that will help determine FAU’s seeding for the C-USA tournament, and free shooting sleeves, fans should flock to the Burrow following the baseball team’s game against Indiana (first pitch for that game is at 4 p.m). Tipoff for the men’s basketball game is set for 7 p.m. 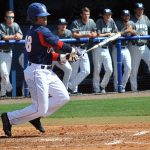