Pick Up The Pace
Armed with a roster full of his own players, FAU coach Michael Curry expects his new-look Owls to be more competive in C-USA this season. 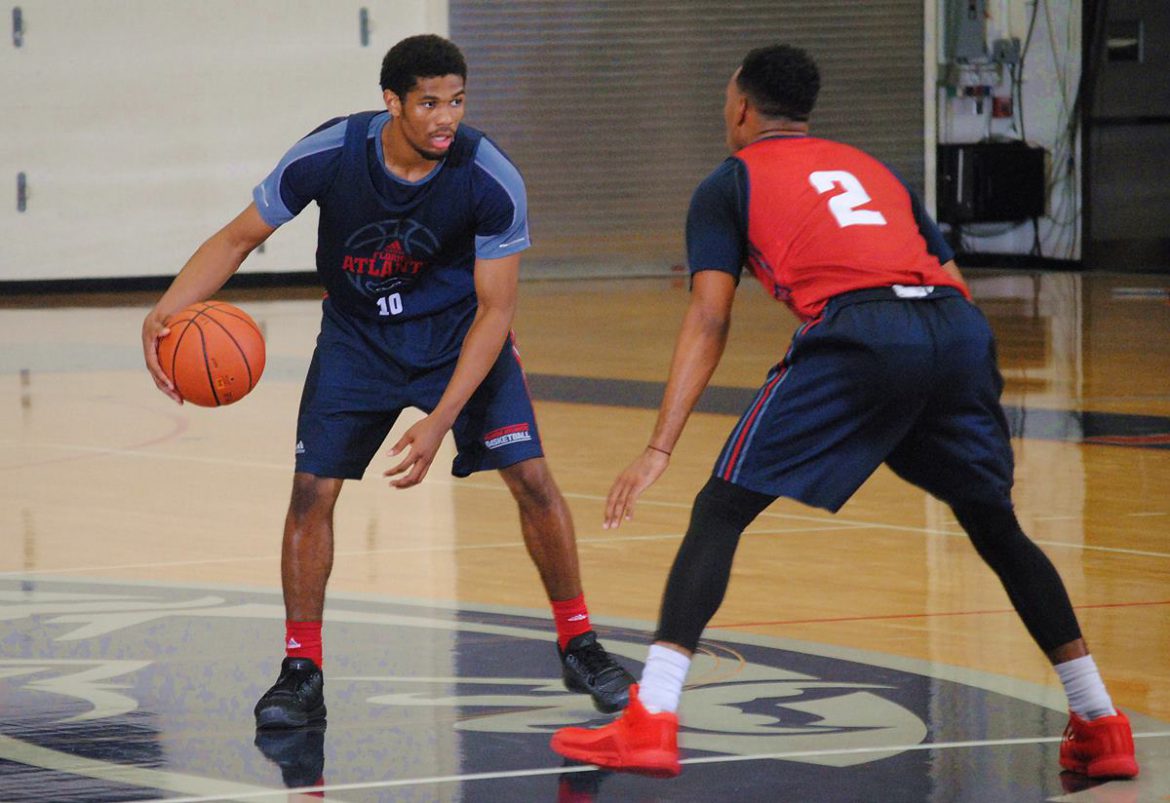 The throne, if that’s what a seat on the bench with a view of FAU’s basketball practice can be called, isn’t exactly comfortable.

“I feel like I’ve gotten my butt kicked twice,” he said.

The record, however, doesn’t tell the entire story. The biggest win from Curry’s first year isn’t factored into that summation.

Taking over a program plagued by player attrition, Curry’s primary task that first season wasn’t winning. He needed to improve the team’s academic standing and raise the basketball program’s Academic Progress Rate, which was on the brink of prompting the NCAA to impose upon the Owls a postseason ban.

“We all, as a university, had to have a different approach to his Year One,” FAU athletic director Pat Chun said. “A win for us was not going on probation and stabilizing the program.”

Curry accomplished his first task, boasting without being prompted during that preseason practice about four consecutive semesters of a team GPA of 3.0 or better. The APR rate is now out of the danger zone.

“I think getting this [program] stable was probably the hardest part for coach Curry,” Chun said.

The Owls can now focus on playing winning basketball – something they haven’t done recently.

A new look brings new expectations. FAU’s roster features eight new players. There aren’t any players remaining on the FAU roster from the Mike Jarvis era. The first game for two starters, William Pfister and Frank Booker, will be their first official games as Owls.

These are players hand-picked by Curry, and he no longer feels it necessary to alter the style he wants to play to suit what he inherited.

“I came in with ideas about how I wanted to play, but I didn’t think we had the personnel to kind of play that way so I adjusted to the personnel to give them the chance to have success, give us a chance as a team to be successful, so we kind of played more possession basketball – a little slower than I would have liked,” Curry said. “We’ll be more uptempo. We’ll trap more. We’ll be more aggressive defensively – all the things that I wanted to do on the collegiate level.”

The Owls’ debut the new style on Friday when their season tips off against Texas St. in Hawaii.

FAU is looking for a fast start – in more ways than one.

“We’ve recruited all these guys and we’ve recruited them to play a certain way, so now we’ve got to play that way,” Curry said. “Everybody says they want to play uptempo. That’s natural. But the work it takes and playing with pace everyday, it takes a lot of work. But I think these guys have embraced it.”

KEY LOSSES
Guard Marquan Botley transferred to Lynn University, taking 8.9 points per game with him. …Guard Jackson Trapp led FAU in 3-pointers last season. He’s now playing with Prince Edward Island in the Canadian League. …Matthew Reed missed much of last season because of concussions. His career is over and he’s now serving as a student assistant.

KEY NEWCOMERS
Frank Booker transferred from Oklahoma and will be asked to provided scoring from the No. 2 guard spot. …The 6-foot-9, 230-pound William Pfister has drawn praise for his play in the power forward role. He’s a strong defender off the pick-and-roll and, combined with Delph, gives FAU two threats in the post. …Guard Justin Massey began his career at FAU, where he started 11 games and averaged 7.5 points as a freshman before transferring to Brown. He’s back in Boca Raton now, but NCAA rules preclude him from taking the court until January.

OPENING TIP-OFF
FAU begins its season with three games at the Rainbow Classic tournament in Hawaii. Friday’s season opener against Texas St., a 10 p.m. tip, is followed by a Sunday game against Southern Illinois-Edwardsville. The Owls complete the trip with a Tuesday contest against host Hawaii. Set the alarm clock. That game will be televised nationally on ESPN 2 and tips off at 4:15.

HOME OPENER
No matter how well the Owls perform in Hawaii, FAU’s Nov. 20 game against Edwards Waters isn’t likely to cause a stampede for tickets. Two days later South Florida comes to The Burrow for a game that could draw a little more attention.

PLAYER TO WATCH
Adonis Filer will need to show that his 2015-16 campaign wasn’t a fluke – and he’ll have to do it coming off the bench. After transferring from Clemson following the 2013-14 season and missing 2014-15 in accordance with NCAA transfer rules, Filer averaged career-highs in nearly every category, breaking out for 10.4 points a night on nearly 40 percent shooting, 4.8 assists, and 2.1 rebounds in 29 minutes. If Filer can get both his turnovers (2.1) and fouls (2.5) down while making more shots, the 23 year old could thrive as the Owls’ sixth man.

CHALK TALK
For the Owls to win, they need to not let any offensive woes ruin their composure and momentum. That may sound simple, but it’s something that caused the team to rank 311th in the nation when it came to points last year with 66.3 a game. The Owls allowed runs not because of bad defense, but because the lack of points was leading to more bad shots. This year, the up-tempo offense, along with offensive players that are generally more skilled, should lead to more high-percentage shots, allowing the Owls to respond to opponents’ runs. “I think they are playing freer,” Curry said. “We’re calling less plays. I don’t feel like, if somebody goes on a 6-0 run, that they are going to take the game away from us. I think we can go on a 6-0, 9-0 run the next two, three possessions.”

GAMES TO WATCH
That week in mid-December where the Owls travel to Ohio State and then play the Hurricanes in Miami will be a nice test for Curry’s team. How will the Owls, who have been in a slow but steady rebuild, fare against two big schools that will most likely be playing for all of the marbles in March?

Pick Up The Pace
Armed with a roster full of his own players, FAU coach Michael Curry expects his new-look Owls to be more competive in C-USA this season.
was last modified: November 11th, 2016 by Chuck King
0 comment
0
Facebook Twitter Google + Pinterest