Painful Start
FAU trounces Monmouth in season opener but may have lost Kevin Abraham for extended time after catcher is hit in face with pitch. 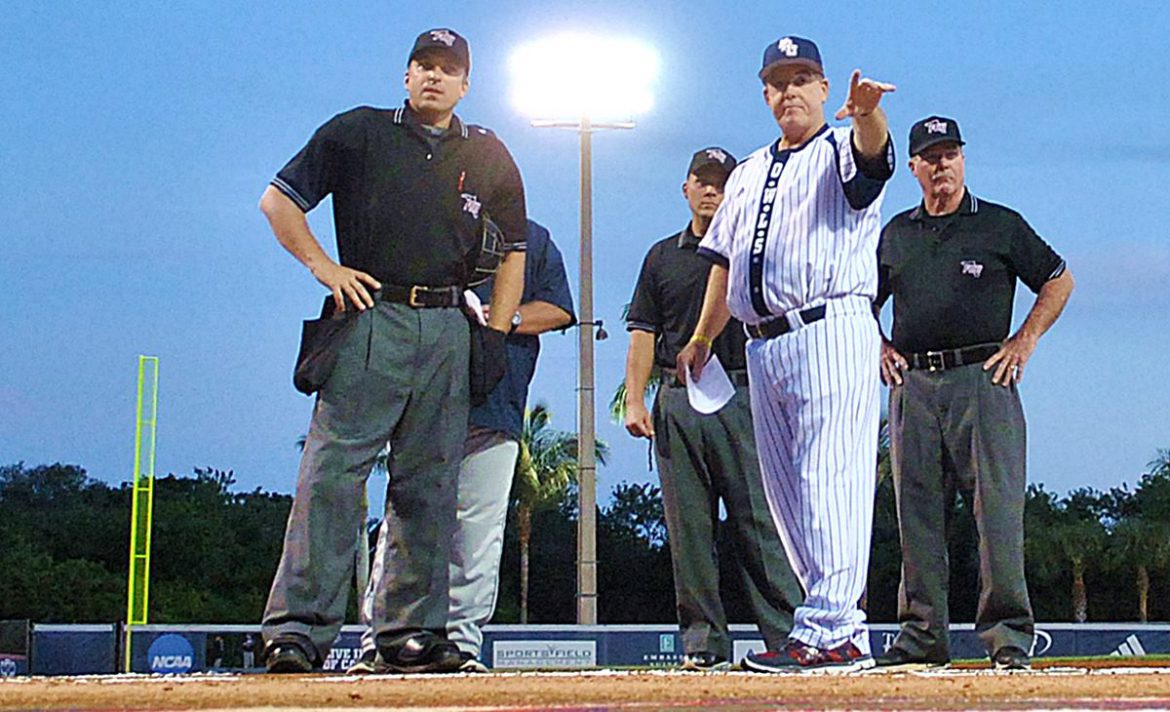 FAU coach John McCormack discusses the ground rules with umpires prior to the Owls' 16-5 season-opening victory over Monmouth. (OwlAccess.com photo)

BOCA RATON – A pitch that drilled Kevin Abraham in the face marred an otherwise triumphant night for the FAU baseball team, which opened the 2017 season with a 16-5 blowout of Monmouth.

Abraham, who missed all of last season while battling Non-Hodgkin Lymphoma, was two-for three in his return to the diamond before the sixth-inning beaning.

“He more than anybody, and with his whole family here, was looking forward to today,” FAU coach John McCormack said. “I thought he caught great, he had an RBI, I think he had another hit. I think he was unbelievable. It breaks my heart. I hope that it’s nothing more than just a little facial laceration and maybe a bad bruise and we move on.”

The redshirt junior dropped to the ground after being hit and appeared woozy for a few minutes before being helped to the dugout by the trainer. He was lifted for a pinch runner.

Abraham remained in the dugout with ice on his face for about half an inning, before leaving with his family to get X-rays. While there was swelling around his left cheekbone, he did not appear to be bleeding.

FAU struck for three runs in the first, highlighted Abraham’s RBI infield single. He drew a boisterous ovation as he walked to the plate for the first time in more than a year.

Abraham pounded a ball into the dirt to the right side of the infield and over the head of Hawks first baseman Aidan Favia. Second baseman Grant Lamberton tracked down the bouncer on the outfield grass but Abraham beat the throw with a head-first dive, allowing Esteban Puerta to score.

He added a double in the fourth inning.

“After he got the double he came in, he kind of winked at me like all is good,” McCormack said. “I don’t even know what to say. It’s mind boggling that this could happen to him.”

FAU starting pitcher Alex House had little trouble with the Hawks, striking out the first three batters of the game. The Hawks touched the junior right-hander for two runs in the third, highlighted by Ryan Bailey’s solo blast to right field.

House settled back into rhythm after the third inning, giving FAU six strong innings by allowing only five hits, a walk and those two earned runs while striking out four. House needed only 71 pitches en route to earning the win.

“It was awesome coming back out after practicing for seven months – you always look forward to the first game,” House said. “Can’t get any better.”

FAU broke the game open by scoring a combined nine runs in the fourth, fifth and six innings.

Moving Forward: Remember that scorching start Esteban Puerta produced last season? He’s off to another good one. Puerta went 3-for-4 with a home run, five RBI and three runs scored. …Tyler Frank hit lead-off, going 3-for-6 with three runs scored and two RBI. …Austin Langham also enjoyed a three-hit night, with one of those hits being a towering blast into the palm trees beyond left field. …Hitting from the two-hole, Jared Shouppe scored four runs.

Up Next: FAU and Monmouth play the middle game of the series on Saturday at 4 p.m. First pitch for Sunday’s series finale is slated for noon.