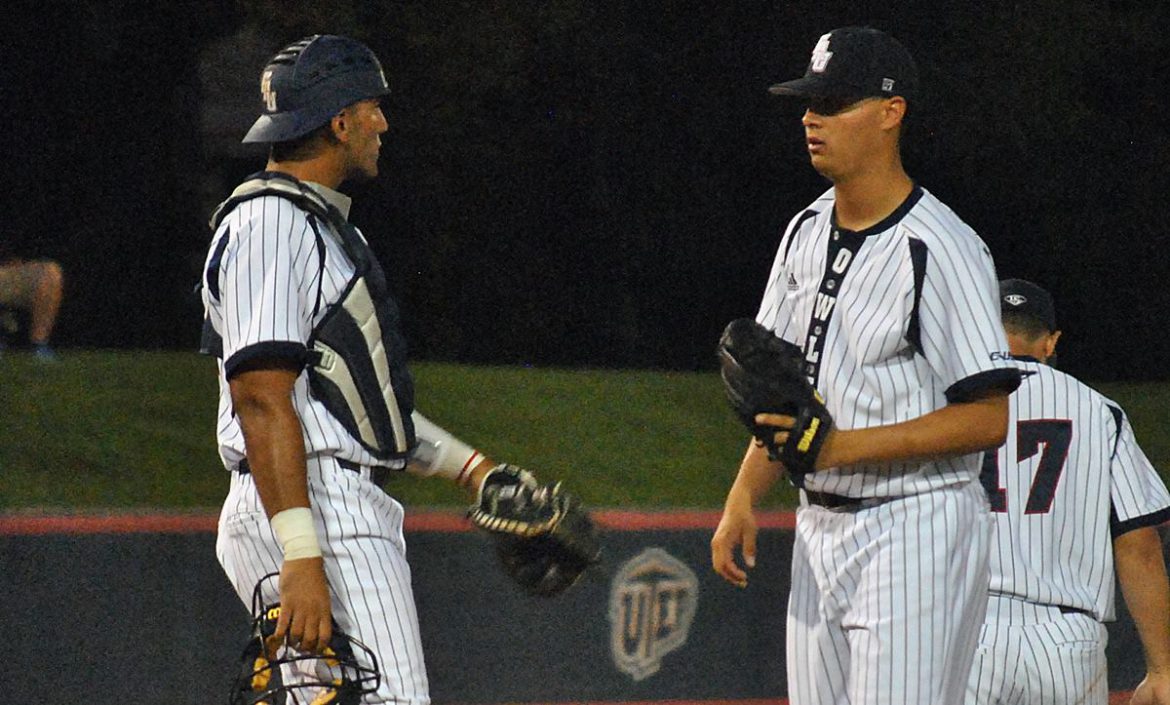 FAU catcher Kevin Abraham meets with pitcher Alex House prior to the start of the Owls' game against Indiana. (OwlAccess.com photo)

BOCA RATON – Walks and home runs doomed FAU, allowing Indiana to hand the Owls their first loss of the season, 8-2.

House’s replacement, Jordan Poore, served up a homer to Austin Cangelosi – the first batter he faced – then walked Tony Butler, who would come around to score.

All of FAU’s runs came via home runs.

FAU first baseman Esteban Puerta continued his hot start, smashing a home run over the left field fence in the first inning, his third of the year, giving the Owls their first run.

Trailing 7-1 in the sixth, Stephen Kerr ripped a Jonathan Stever offering off the left field foul poll for the Owls their second run of the night.

Tyler Frank launched a two-run shot in the ninth.

One week after being hit in the face by a pitch, Kevin Abraham returned to Owls’ starting lineup at catcher. Abraham missed all of last season while battling Non-Hodgkins Lymphoma. He went 1-for-4 on the night.

Moving Forward: Tyler Frank’s bat, which belted its second home run of the season as part of a 2-for-4 night that kept his batting average above .500 for the season. …Marc Stewart is expected to get an inning in relief either Saturday or Sunday in preparation for Wednesday’s scheduled start against Miami. …Stephen Kerr smack two hits, including that sixth inning homer. He also made a sliding catch in foul territory deep down the right field line. …Pitcher Andrew Jones worked a perfect ninth inning in his FAU debut.

Sliding Backward: Tyler Frank’s glove, which committed its third error in four games this season. …Right fielder Jared Shouppe left the game after injuring his right leg while rounding first base. Shouppe missed all of last season following knee surgery on the same leg. His status for the remainder of the weekend is uncertain. …When Alex House misses, he tends to miss up in the zone, which is why he’s already surrendered three home runs in 11 innings. …FAU backstops have already been called for catcher’s interference three times this season. Kevin Abraham was the offender on Friday, doing so on the first pitch of the game.

Key Stat: 5 – walks allowed by FAU pitchers. The Owls actually outhit the Hoosiers 10-8, but Indiana took advantage of FAU walks and errors to post crooked numbers on the scoreboard.

Up Next: FAU and Indiana play the middle game of their weekend series on Saturday, with first pitch scheduled for 4 p.m. The game will be a battle of lefthanders, with Jake Miednik getting the ball for the Owls and Tim Herrin taking the mound for the Hoosiers. 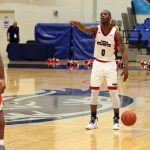 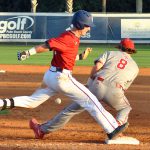