Late Arrivals
A couple players who originally signed with FAU in February may be about to enroll for the spring semester.

BOCA RATON – Though focused on steamrolling toward the Dec. 20 early signing day for football, FAU hasn’t closed the book on its 2017 signing class yet.

At least two players who signed with FAU in February but did not arrive for this season appear ready to join the Owls for the spring semester. And a third may not be far behind.

Defensive back Jovon Burriss says he completed the necessary coursework to enroll at FAU, has sent his paperwork to the school and is looking forward to coming to Boca Raton.

“Everything’s ready to go,” Burris said. “I was like, thank God. Got everything done. My scholarship was still there.”

Linebacker Carson Lydon, who began his career at Virginia Tech before transferring to Los Angelos Valley CC, looks like he’ll be joining Burris.

On Tuesday Lydon tweeted a picture of himself and FAU defensive backs coach Corey Batoon, writing “thanks coach for stopping by and showing love @coreybatoon can’t wait to be at #FAU.”

Burriss and Lydon were among the five players from that class who didn’t enroll at FAU prior to the season.

A third, safety Rodney Washington from Contra Costa College, says he is close to fulfilling his academic requirements but believes a summer arrival to be more likely.

A Fullerton College graduate, Burris can play both corner and safety for FAU. Corner is a position of need for FAU. With Raekwon Williams having undergone knee surgery, the Owls enter the Dec. 19 Boca Raton Bowl with only four healthy scholarship corners – six if nickelbacks Herb Miller and Quran Hafiz are included.

He followed FAU closely this season, watching as many games as he could find in an attempt to better prepare for his arrival.

“Tried to read the defense a little bit, trying to pick up little things,” Burriss said.

Burriss originally committed to Arkansas St. before flipping to FAU. He says Arkansas St. coaches asked him why he would leave an established front-runner in the Sun Belt for a rebuilding program like FAU.

In response, Burriss said he told coaches that FAU was building a championship team quicker than people think.

“It was amazing to just watch it,” Burriss said. “I wasn’t a part of it but I was like, I told you all they were going to do that.”

As for 2018 commitments, FAU currently has five – all coming in the past week.

Junior college recruits Charles Cameron, a defensive tackle, and wide receivers Desean Holmes and Nero Nelson are all expected to sign on Dec. 20 and would have the ability to join FAU for the spring semester provided that their coursework is complete.

Nelson isn’t expected to join FAU until the summer.

Late Arrivals
A couple players who originally signed with FAU in February may be about to enroll for the spring semester.
was last modified: December 14th, 2017 by Chuck King
0 comment
1
Facebook Twitter Google + Pinterest 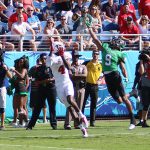 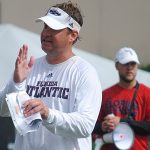