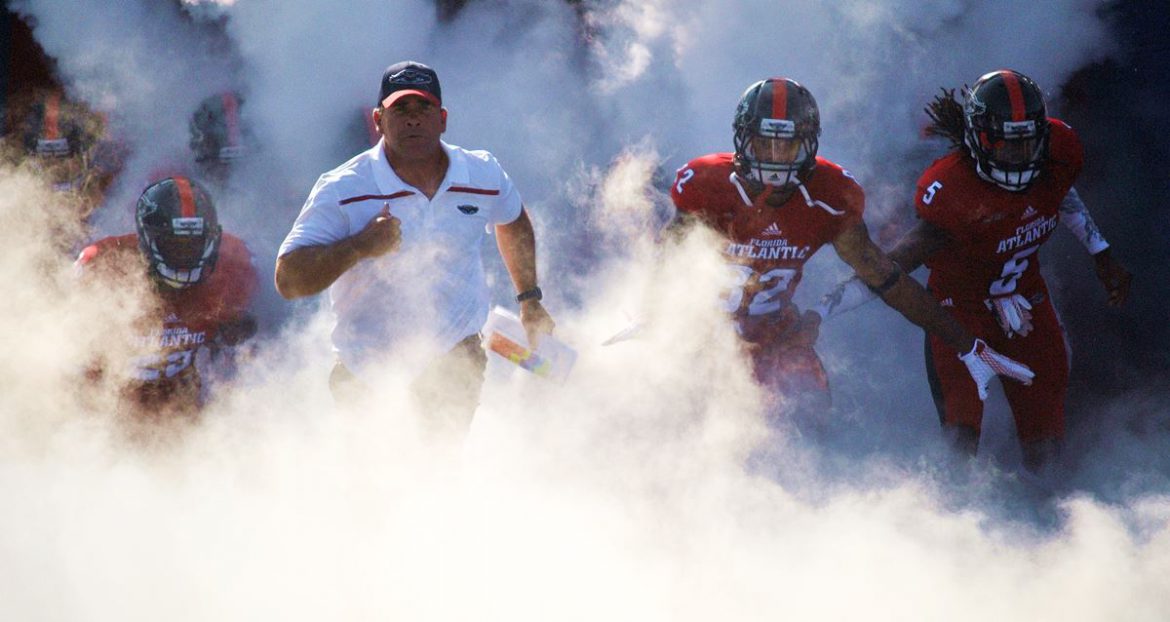 BOCA RATON – For many Owls, though, the 6 p.m. season-opening kickoff against Southern Illinois won’t mark a new beginning.

Rather, it will be the continuation of a movement that started in November.

“We’re coming off a lot of momentum of Old Dominion,” defensive end Trey Hendrickson said prior to the start of fall camp. “Believe it or not, taking away their season was big for us because we feel like we owed it to ourselves.”

The Monarchs coveted a victory that would make them bowl eligible for the first time in program history.

FAU raced to a 24-3 first half lead only to see the Monarchs fire back in the second half, taking a fourth-quarter lead.

Blowing late leads had become almost customary for FAU in recent years, but this time the Owls fought back. Coach Charlie Partridge replaced quarterback Quez Johnson with Jason Driskel, who led the Owls on two field goal drives, the second of which provided the margin in a 33-31 FAU victory.

It may not have felt like a major accomplishment to the casual observer, but the win propelled the Owls into the offseason with more confidence than might be expected of a 3-9 team. What amounted to Thanksgiving leftovers continued to feed the Owls into the summer.

“I feel like we carried that into camp,” center Roman Fernandez said. “We had a great camp, we just need to finish – take the momentum from camp into the season. We can go far if we do.”

Late failures have plagued the Owls since Charlie Partridge became the head coach prior to the 2014 season.

The Owls pretty much gave away a sure victory to Wyoming early in 2014, setting the tone for two years worth of games that make followers of FAU football cringe.

Tulsa scored with 3 seconds remaining in regulation to send last year’s opener into overtime, where the Golden Hurricane ultimately finished off the Owls.

Against Rice four games later, FAU surrendered two touchdowns in the final 8 minutes to turn a 26-13 lead into a 27-26 loss.

The victory over Old Dominion bucked that trend. To build on the success FAU experienced late in that ODU victory, FAU devoted much of the offseason to developing a mental approach that will help them perform better late in games.

Teammates share DeBoer’s excitement. Coaches, while also ready to get back on the field, caution against overconfidence, especially against a team like the Salukis, who, despite playing on the FCS level, still pose some concerns.

If last year is any indication, Southern Illinois can move the football. The Salukis’ averaged 498.1 yards per game last season, fifth best in the FCS subdivision.

Driskel said playing last year proved advantageous in his quarterback battle with Daniel Parr – allowing him to adjust to the speed of the game at the Division I level. That’s an experience Straughan will receive for the first time on Saturday.

But even tough he did use the experience he gained earlier in the season to lead the Owls to that season-ending victory over the Monarchs last year, Driskel says he’s left that ODU victory behind.

“I know we ended last year on a win but you don’t like to look back,” Driskel said. “It’s more moving forward and what we can do today to prepare us for Saturday.”

Keys to the Game: FAU vs. Southern Illinois

Key for the Owls: Control their emotions. FAU players emerged from camp with a readily-apparent confidence. They have the athleticism to play with anyone on their schedule and the attitude that they have something to prove. Opening at home for the first time in all but a handful of player’s careers, the Owls will be energized, which often leads to the kinds of enthusiastic mistakes that allow inferior teams to stay in the game. If the Owls properly channel their emotions, they could put the game out of reach early.

Key for the Salukis: Withstand FAU’s initial onslaught. The Owls will want to mash the gas pedal on new offensive coordinator Travis Trickett’s new offense early. If Southern Illinois can get a couple of quick stops, their offense has the fire power to put up points, which might shift the Owls back into here-we-go-again mode.

Key Match-up: FAU’s offensive line vs. Southern Illinois defensive line. If Antonyo Woods doesn’t play, right tackle Kelly Parfitt will be the only starter along the offensive line who is playing in the same spot as he did when camp ended. The Salukis will try to test the line’s cohesion. Fortunately for FAU, Trickett’s offense features an abundance of quick passes and runs that figure to relieve the pressure on the line.

Well Connected: Saturday’s game will be a reunion of sorts for several involved. FAU defensive coordinator Roc Bellantoni was the acting head coach for Eastern Illinois in 2007 when they lost 30-11 in the FCS playoffs to a Southern Illinois team quarterbacked by current Salukis coach Nick Hill. While in high school, FAU QB Jason Driskel received quarterback coaching sessions from Hill, who was a friend of a teacher at Oveida-Hagerty.

High School Reunion: Southern Illinois running back Daquan Isom graduated from Orlando-Dr. Phillips but won a state title with Apopka in 2012 on a team that featured FAU DE Trey Hendrickson. “He’s fast. He’s physical. He came from Apopka. He won’t quit,” Hendrickson said of Isom. “It doesn’t matter how big he is on paper…. he’s going to hit like a ton of bricks.” Is Hendrickson looking forward to tackling his old high school teammate? That question elicits a devilish smile from Hendrickson. “I’m from Apopka, too. I hit like a ton of bricks.”

Motorized: Listening to Trickett discuss Saturday’s game, it seems all but certain that true freshman running back Devin “Motor” Singletary will touch the ball on offense. Special teams coordinator Chris Hurd also said, without naming names, that youngsters will get a chance on his unit. Does that mean Motor will be revving up kick returns? That could prove exciting.

Showing Mercy: New offensive coordinator Travis Trickett dubs his offense #NoHuddleNoMercy, but Trickett came close to admitting that, should any game this season get out of hand, huddling and mercy aren’t out of the question. “It’s kind of hybrid,” Trickett said. “Hopefully you’ll see it later on.” 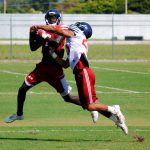 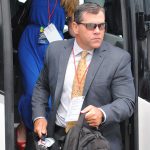