Welcome to the second episode of Down With DeVivo, a weekly segment on OwlAccess.com where host Karla DeVivo helps FAU fans get to know one player a little bit better.

In Down With DeVivo, Williams discusses his favorite football player, chooses one breakfast cuisine over another and describes what it’s like to make an interception.

A junior, Williams is enjoying his best season as an Owl. Through eight games Williams has recorded 32 tackles and three games ago against Charlotte he recorded his first career interception.

FAU travels to Houston this week to face Rice in a Conference USA battle. Neither team has a victory over an FBS opponent this season. Kickoff is scheduled for 3:30 p.m. 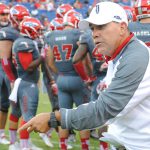