Whyte, a redshirt junior, scored the opening and closing touchdowns for FAU in Saturday’s 34-15 victory over Western Kentucky.

Entering Saturday’s contest Whyte’s 7.0 yards per carry would have ranked fifth in the NCAA had he amassed enough carries to be eligible. That shouldn’t be a problem this week. Whyte’s 22 carries on Saturday marked a career high.

“(He’s) one of the strongest players in our program, and love the story of how the guy just keeps fighting and continues to make plays regardless of the situation,” FAU coach Lane Kiffin said.

A 77-yard fourth-quarter scamper not only capped the scoring for FAU, but it also boosted his average yards per carry on the night to 7.8.

“The guys in front of me did an excellent job when I got the ball,” Whyte said. “I pressed and I just saw a wide open lane. [Wide receiver Jovon] Durante did a good job on blocking downfield. I had the easy part, just running.”

Singletary didn’t have a bad night, either. The back known as “Motor” powered, scurried and juked his way to 148 rushing yards. Singletary’s two rushing touchdowns gave him 64 for his career, tying him with Cedric Benson and Anthony Thompson for sixth on the NCAA’s career rushing touchdowns list.

“Its fun out there, man,” Singletary said. “That’s the best way to put it. We’re just having fun.”

FAU posted 206 of its 315 rushing yards in the second half. It’s the second consecutive game where both Whyte and Singletary broke the 100-yard barrier.

Turning Point: FAU held the lead throughout the game and led 27-9 before D’Andre Ferby’s seven yard touchdown run with 4:11 remaining cut the Owls’ lead to 27-15. WKU recovered the ensuing onside kick and quickly marched inside the FAU red zone before Ernest Bagner sacked Steven Duncan on first down. The Owls then forced three consecutive incompletions, ending the threat and all suspense in the game.

3 – Fourth down conversions on three tries for FAU.

6 – Penalties for 70 yards committed by FAU, the costliest of which, a controversial Singletary block below the waist call, wiped out a Johnson TD run.

7 – Catches covering 79 yards for Jovon Durante to lead the Owls.

9 – Tackles each by linebackers Andrew Soroh and Rashad Smith to lead the Owls.

30 – Yards passing for Johnson, who also threw the Owls’ lone interception on a play where he was hit while attempting to deliver the pass.

94 – Receiving yards for Pico Harrison on three catches, more than his combined receiving yardage compiled over his past six outings.

Up Next: FAU will attempt to achieve bowl eligibility with a rare Thursday night game at North Texas. Kickoff is scheduled for 9:30 p.m. 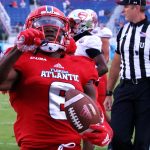