FAU baseball returned to its winning ways by sweeping a doubleheader from Marshall on Saturday.

The 3-2 win in the opener snapped FAU’s first three-game losing streak of the season. The Owls clinched the series with an 8-6 win in the nightcap.

“This was a really good day for us,” FAU coach John McCormack said. “I am proud of the way the guys played for 18 innings. Doubleheaders are not easy, and the guys were up to the challenge.”

Trailing 2-1 in the eighth inning of the first game, Tyler Frank’s triple drove in Richie Nizza with the tying run. Joe Montes followed with a single down the left field run, driving in Frank with what would be the game-winning run.

Andru Summerall’s second homer of Game 2 came in the seventh inning, giving the Owls a 6-5 lead. A two-run homer by Frank in the top of the ninth put the game out of reach.

Moving Forward: Joe Montes had three of the Owls’ four hits in the first game, driving in two runs. …Tyler Frank extended his hitting streak to 21 games. …Pitcher Jake Miednik allowed one earned run without walking a batter while striking out 10 in six innings the first game. …In the second game, Cody Wilson smacked his fourth homer of the season. …One of Richie Nizza’s two hits in the second game was his first home run as an Owl. Drew Peden picked up the win in the first game by tossing three scoreless innings of relief. …Matt Harris earned the first win of his career by allowing one run on three hits while striking out four in three innings of relief.

Sliding Backward: FAU’s third through ninth hitters failed to record a hit in the first game. …Normally FAU’s Sunday starter, Vince Coletti started the second game and allowed four runs in five innings. …Weston Clemente’s struggles continued when he walked two and allowed one run in 2/3 of an inning. …Eric Rivera went hitless in six at-bats on the day, striking out twice.

Key Stat: 5 – Homers hit by FAU in the second game.

Up Next: FAU will send Mike Ruff to the mound in an attempt to sweep Marshall on Sunday. First pitch is scheduled for 1 p.m. 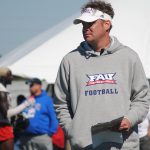 Practice for a Cause