Pre-Camp Talk
FAU football opens fall camp on Friday. In this special installment of the OwlTalk podcast, we dscuss the QB situation, FAU's ability to repeat and what constitues success.

Who will play quarterback? Does it really matter who plays quarterback? Can the Owls repeat knowing that every C-USA team will be gunning for them? Can running back Devin Singletary repeat his record-breaking season, and does he need to in order for FAU to repeat as champions?

Those topics and more are addressed this week on a special pre-camp installment of OwlTalk with Brian Rowitz, the first and still best podcast covering FAU football.

Once the season starts, each week Rowitz and our Chuck King will dissect the previous week’s game, offer insight as to what the Lane Kiffin-led Owls are working on and will provide predictions regarding that week’s upcoming game.

But before we get to that, we deliver this 2018 pre-camp version of the premier FAU football podcast. OwlTalk is eager to bring FAU football to your computers, phones and ears, thereby keeping Owl fans as informed as they can be about one of the most intriguing college football teams of the year. 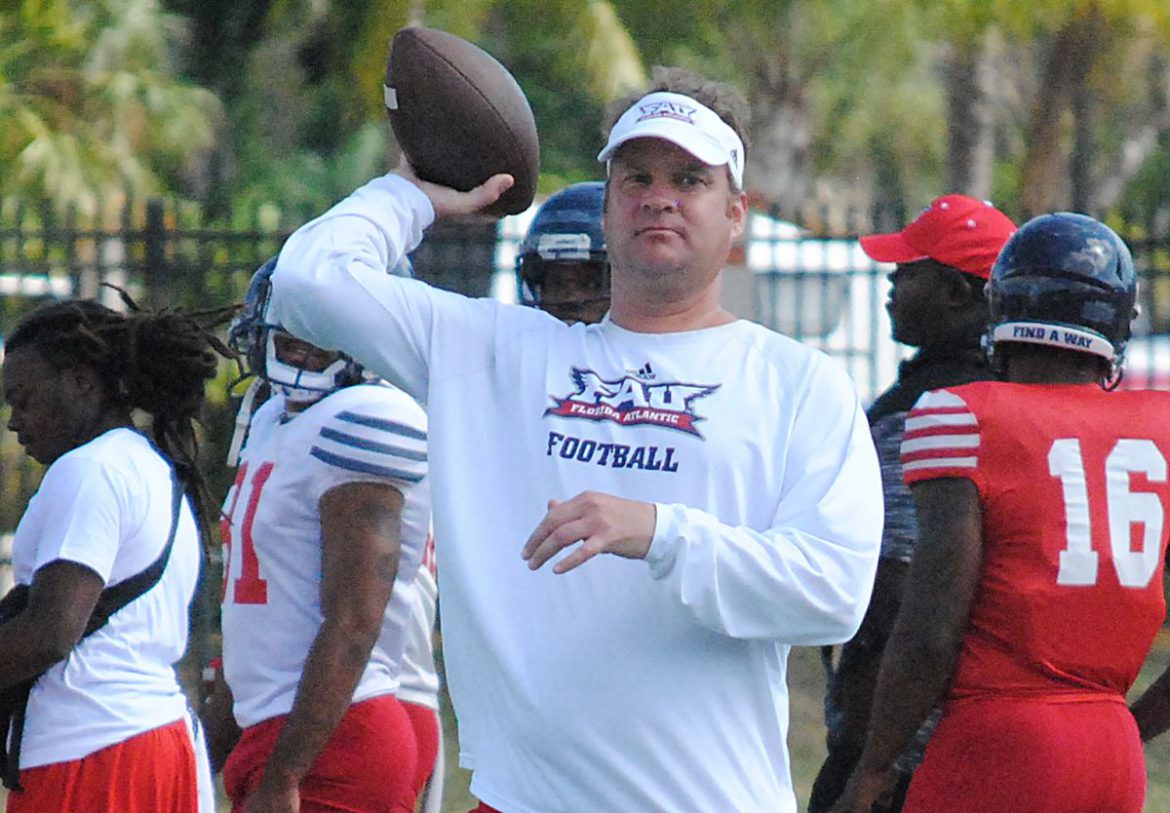 BOCA RATON – FAU football players report for fall camp on Thursday, with the first practice coming 24 hours later. The reigning Conference USA championship, the Owls have high expectations heading into 2018. In its preseason poll, Conference USA predicted FAU to repeat as East Division champions, but that doesn’t mean the Owls won’t have storylines worth watching during the fall. Here’s a look at five of them we’ll be watching over the next four weeks.

1. The relationship between coach Lane Kiffin and offensive coordinator Charlie Weis. Earlier this summer Kiffin mentioned that he wasn’t certain who would be calling the plays this fall. Kiffin is highly regarded as a play caller, but his stated goal is to act as the CEO of the team. CEOs don’t call plays. At times during the spring Kiffin inserted himself into the offensive portions of practice more than he did the previous spring with Kendal Briles as the coordinator. Kiffin wants Weis to run the offense. Will it happen?

2. De’Andre Johnson’s arm strength. Blood clots, and the surgery to remove them, sapped Johnson of nearly all his 2017 season and much of the zip on his passes. By the end of spring practice Johnson estimated that he was still throwing at about 80 percent of his pre-blood clot velocity. The difference was noticeable. We’ll be paying plenty of attention to the quarterback battle as a whole, but it’s difficult to envision there being much of a battle if Johnson isn’t back to 100 percent.

3. FAU’s kicking plan. Kicker Greg Joseph and punter Ryan Rickel graduated, and spring practices didn’t offer much of an idea as to their replacements. Someone will kick the ball for FAU this year, but the degree to which the Owls find a kicker and punter who they are confident in could determine how frequently the Owls elect to gamble in search of extra first downs.

4. The defense’s level of aggression. New coordinator Tony Pecoraro’s scheme during the spring was significantly more aggressive than that of predecessor Chris Kiffin, and players consistently spoke about how much they enjoy the new scheme. Will Pecoraro keep the pressure on FAU’s offense,or will he pull back in camp as part of an effort to keep FAU healthy heading into the season?

5. The Owls’ health. A major reason FAU’s offense enjoyed so much success last season was that the offensive line stayed together. We’ve already mentioned Johnson’s health question. Backup running back Tyrek Tisdale didn’t participate in spring drills. Linebacker Azeez Al-Shaair was no-contact following offseason Tommy John surgery. Are those guys ready to go? And there’s always one or two injuries that crop up during camp. Often they are capable of derailing a season before it even starts.