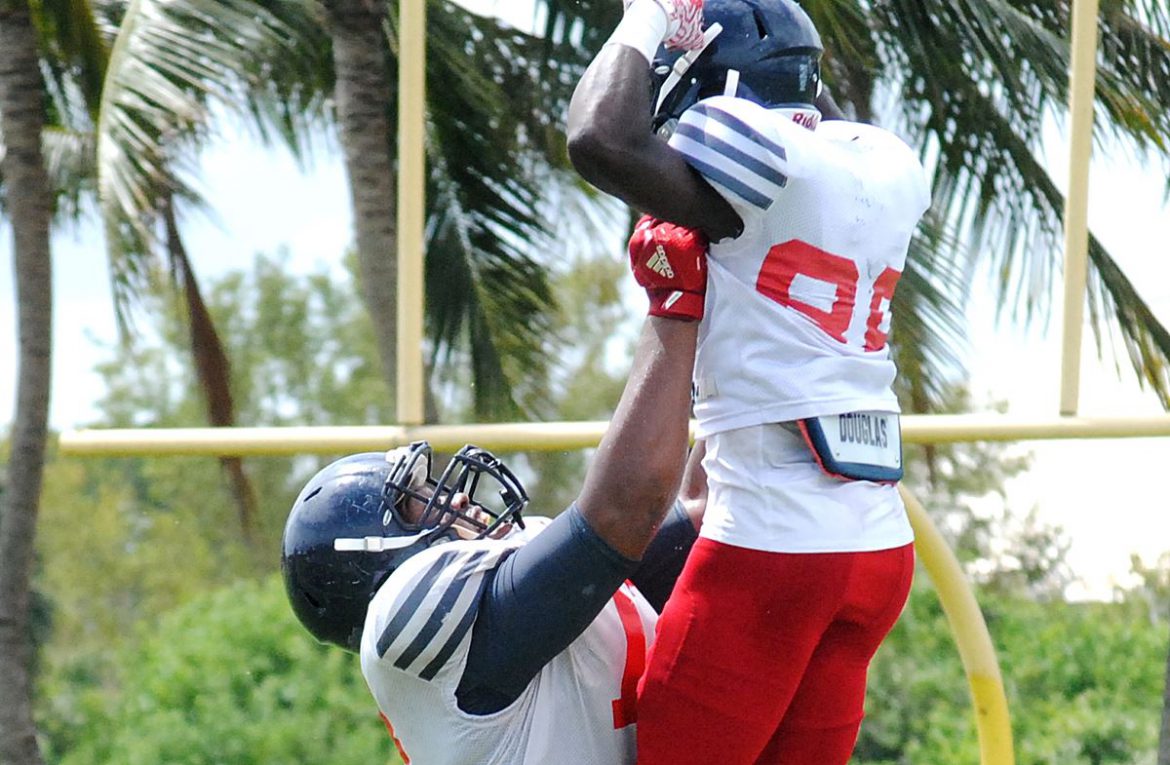 Sounds Wright
FAU wide receiver Willie Wright loves the effect that scoring on a deep pass elicits from those around him.

“First they’re gasping for breath when the ball’s in the air,” Wright said, “Then you catch it and crowd just goes ROAR!”

Wright scored touchdowns through the air and on the ground as a true freshman last season – wiggling around some defenders, blowing past others. The first score of his college career detonated of a new level of explosiveness for FAU football.

In the Owls’ opener against Navy – Wright’s first collegiate game – he streaked down the left hash marks, racing under a Daniel Parr throw, securing the ball then blazing the remainder of the way for a 95-yard touchdown – the longest passing touchdown in program history.

“It’s quiet, then it’s out of control,” Wright recalls from that play.

That kind of production caught Wright a bit off guard.

“When I first got here I really didn’t expect to start,” Wright said. “I was trying to learn because it was my first year in college.”

Listed at 5-foot-8 and 155 pounds – both of which could be exaggerations – Wright initially struggled to adjust to the speed of the college game.

He dropped some passes in fall camp and struggled with confidence.

Offensive players are generally slow to praise defenders. Not Wright, who credits FAU’s secondary with getting him ready for a staring role.

“Going against Jalen [Young], Shelton Louis, [Chris] Tooley and Herb [Miller], they helped me a lot with it,” Wright said.

Young and Co. sharpened Wright, who lined up mostly in the slot, into a Conference USA All-Freshman performer. Wright, though, says he’s only getting started.

“I just want to prove I’m just not an inside guy, I can dominate on the outside, too,” Wright said.

“I’m special back there,” Wright said. “Nobody can stop me in the punt return.”

Saturday’s scrimmage marked the first time this spring Wright was cleared for contact. He responded with the biggest offensive play of the day, catching a 50-yard touchdown pass from De’Andre Johnson.

“It feels good to do it again,” Wright said. “And again. And Again.”

FAU needed only seven innings to post its highest run total of the season – a 17-3 pounding of Marshall that completed a weekend sweep.

Cody Wilson led the way for the Owls with two homers and six RBI.

“After a long day yesterday, our guys came back with energy and fire and finished off the weekend the right way,” coach John McCormack said. “Mike Ruff set the tone for us on the mound, and Joe Montes started us off offensively. The rest of the guys followed in line after that. Cody Wilson put an exclamation point on the weekend with his two home runs, including a a grand slam, and six RBI.”

FAU broke open a 4-1 game with five runs in the fourth and five more in the fifth.

Making his first weekend start of the season, Mike Ruff tossed four innings of one-run ball, striking out six while only walking two.

The Owls scored twice in the first, with Tyler Frank racing home on Joe Montes’ double. Montes scored on a single by Pedro Pages.

Moving Forward: All nine FAU starters reached base at least twice and all scored at least one run. …Cody Wilson scored three times – twice on his home runs. His six RBI are the most by an Owl this season. …Tyler Frank’s sixth inning double increased his hitting streak to 23 games. …Reliever Jordan Poore struck out the side in the sixth.

Key Stat: 8 – Consecutive FAU batters who came to the plate with the bases loaded in the fourth inning.

Up Next: FAU goes for the season sweep of Miami on Wednesday night in Coral Gables. First pitch is scheduled for 6 p.m.