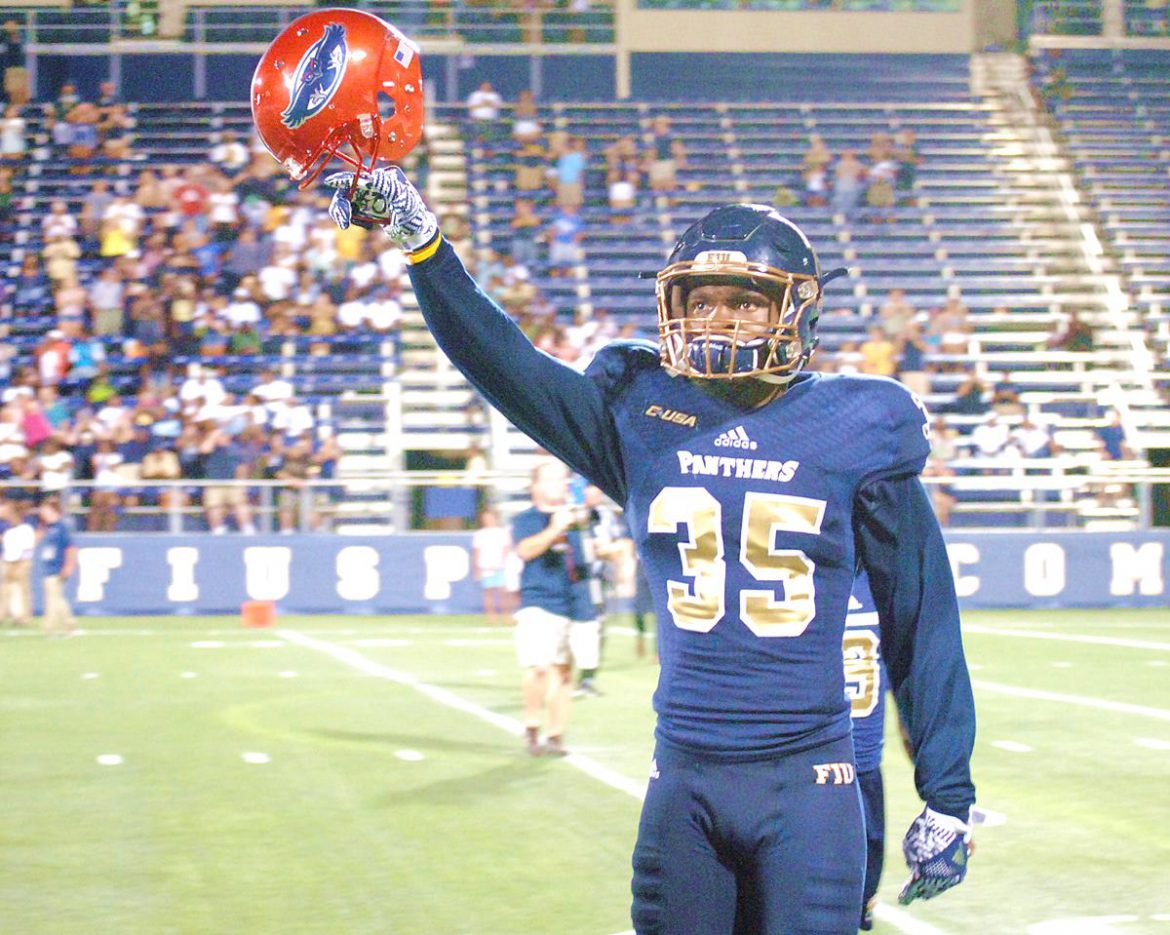 FIU linebacker Davison Colimon taunts the FAU sideline with the FAU helmet he removed from the Shula Bowl Trophy during the Panthers' celebration following their 2016 victory. (OwlAccess.com photo)

MIAMI – Turnabout is fair play – even if that means a little vandalism is involved.

Moments after FIU quarterback Alex McGough took the final snap, the Panthers raced across the field to claim the Shula Bowl trophy from the FAU sideline.

FIU’s 33-31 gave the Panthers the opportunity to pay FAU back for ripping the FIU helmet off the Shula Bowl trophy following last year’s Owls’ win. The game’s final seconds hadn’t even ticked off the clock before FIU running back Anthony Jones removed the red FAU helmet from the trophy.

Panthers’ linebacker Davison Colimon held it high for the entire FAU section of the stadium to see.

Moments later the Panthers were tossing the dislodged FAU helmet around Ocean Bank Field like a Frisbee.

The trophy, much like the FAU football team itself, was once again broken.

Truth be told, they are givers.

FAU’s defense allowed its opponent to score at least 30 points for the fifth time in five games. This time, though, it was the worst scoring team in the nation doing the damage.

After winning its first game of the season, the Owls have now dropped four straight and are 0-1 in Conference USA play. For FIU, which fired coach Ron Turner on Sunday and replaced him with interim coach Ron Cooper, this was the first win of the season.

Already leading 17-14, FAU appeared to grab momentum by the throat when linebacker Azeez Al-Shaair picked off McGough’s pass on the first play of the third quarter and returned it 30 yards for a touchdown.

FAU defensive coordinator Roc Bellantoni greeted Al-Shaair with a big hug on the sideline, telling him, “We’ve been waiting on that all year!”

Rather than continue to apply pressure, though, the Owls let the Panthers back into the game.

A 40-yard catch by tight end Jonnu Smith on the ensuing possession set up running back Anthony Jones’ 3-yard TD run that trimmed the lead to 24-21.

A Buddy Howell fumble on the following possession – the first of the second half for the Owls – gave the ball right back to the Panthers. On the next play McGough hit receiver Thomas Owens for a touchdown from 26 yards out.

“It’s devastating” said Howell, chosen FAU’s MVP for the game. “We can’t be losing like that. We can’t be giving games away.”

The Owls did respond with a touchdown drive of their own, capped by a 1-yard run from Devin Singletary – the first of his college career.

But FIU added a couple of field goals, the second coming less than three minutes into the fourth quarter, to jump back on top.

FAU only had two possessions after that final field goal – both three-and-outs. On the second possession – what turned out to be the Owls’ final possession – the Owls left Howell on the bench and handed to Singletary three consecutive time. Nine yards. Punt.

FIU took over with 6:02 remaining and never gave the ball back.

“Everyone is taking ownership,” FAU coach Charlie Partridge said. “As I have talked about, we need to all get better.”

FAU’s passing game was absent much of the night, amassing only 92 passing yards through the air. Not all of that was Jason Driskel’s fault. At least five different intended receivers dropped passes. Driskel did help out the Owls ground game, running for 49 yards on seven carries.

The Owls couldn’t have asked for a better start to the game. Howell cut back through the middle of the FAU line for a 68-yard touchdown run that put FAU up 7-0 before most of the sparse crowd had even found its seats.

FAU’s defense couldn’t capitalize on the momentum. The Owls have struggled with quarterback runs all season and FIU became the latest team to take advantage of the Owls’ inability to stay home on the read-option when McGough took it to the house from 17 yards to tie the game at 7.

McGough would later score untouched on a 35-yard run on a 4th and short.

FAU ended the half with 10 points in the final 1:38. Marcus Clark scored on a 9-yard pass from Driskel. Following a Jalen Young interception, Greg Joseph added a field goal.

TURNING POINT
Azeez Al-Shaair’s interception return for a TD put FAU up 24-14 early in the third quarter. The Owls had scored 17 points in a little more than 2 minutes of game time and appeared on the verge of pulling away. The Owls needed one more defensive stop to keep rolling. Instead, the Owls’ defense did what it does best – bend and then break. Seven plays later FIU was in the end zone.

KEY STATS
0 – Carries for running back Kerrith Whyte, who had been emerging as a threat.

1 – Catch for Marcus Clark, who turned it into a 9-yard TD. Clark has a tendency to make big plays when given the opportunity. He hasn’t been given many opportunities this season.

2 – Interceptions by Jalen Young in as many years against FIU.

11:22 – Time of possession in the fourth quarter fo,r FIU, which pounded the Owls into submission.

50 – Yard field goal for Greg Joseph in the closing seconds the first half – the longest of his career.

UP NEXT
FAU welcomes Charlotte (1-4) to Howard Schnellenberger Field on Saturday. The 49ers lone win came against Elon. Kickoff is scheduled for 3:30 p.m. 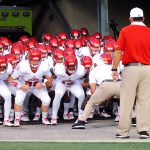 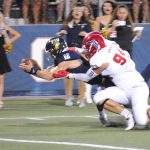