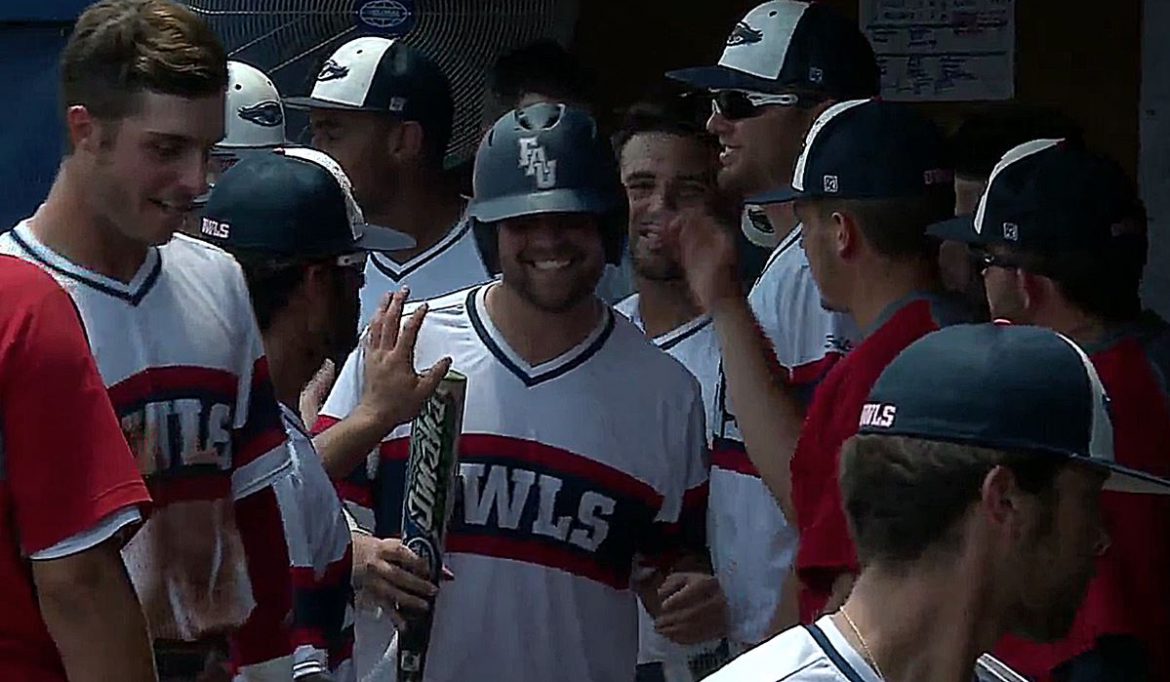 Florida Atlantic erupted for 10 runs in the first two innings, then withstood a late Jacksonville rally along with a lengthy rain delay to defeat Jacksonville 12-7 in an NCAA Tournament elimination game as part of the Gainesville regional.

FAU will now face tournament top seed Florida in a game originally scheduled to be played on Saturday but was postponed until 1 p.m. on Monday. The Owls need to defeat the Gators twice in order to advance to a super regional. Florida defeated FAU 6-2 in February – the only meeting this season between the two teams.

“I thought we did what we needed to do,” FAU coach John McCormack said. “Again we came out, we wanted to get a fast start, and we certainly did.”

Cody Wilson set the tone for the Owls’ early offensive explosion by launching what turned out to be a two-run inside-the-park home run off the center field wall in the bottom of the first. Three batter later Gunnar Lambert blasted a three-run homer over the right field wall. When Lambert completed his trot, the first five FAU batters had scored.

FAU added five more runs in the second, with Eric Rivera’s two-run homer to left being the big blow of the inning. FAU scored its first 10 runs of the game before making its fifth out of the afternoon.

By the end of the fourth inning every Owl in the starting lineup had recorded a hit. All 17 FAU hits came in the first four innings.

After reserving ace Jake Miednik for a potential match-up with the Florida Gators during the tournament’s first two games, McCormack elected to give the senior lefty the ball in Sunday’s first game.

Miednik eased his way through five innings but didn’t make it out of the sixth, when Jacksonville scored its first four runs. Two of those runs were charged to Miednik, with two more – along with an additional run the following inning – charged to little used reliever Chris Moore.

Jacksonville put a scare into FAU in the seventh, plating three runs and putting runners on second and third with two outs. That’s when the weather delay came, lasting nearly five-and-a-half hours.

When play finally resumed reliever Drew Peden entered and struck out Chris Gau to end the threat. Peden quieted the Dolphins’ bats the remainder of the way.

“After the rain delay, we got our seven outs and we’re able to go home and be able to play tomorrow,” McCormack said. “Survive and move on.” 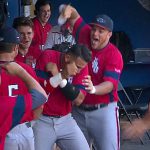 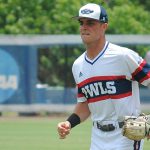