Bonner Ejected
FAU defensive end Tim Bonner ejected from the Owls spring game after throwing punches at his teammates during an arguement.

BOCA RATON – Lane Kiffin thought for a few moments but couldn’t come up with a time that he’d seen referees eject a player from a spring game.

The closest he could come happened as an assistant at USC when coaches benched a defensive player who hit the quarterback.

That changed on Saturday when officials ejected defensive end Tim Bonner, who started a fight, from the Owls’ spring game.

Attempting to sack Trent Wessel, Bonner chased the QB to the sideline. Wessel unloaded a pass out of bounds to avoid a loss, but Bonner popped him out of bounds anyway.

“Obviously they are non-contact and when you hit him out of bounds like that something should happen,” said tight end Harrison Bryant, who is also Wessel’s roommate. “Somebody should say something and it just escalated.”

On the sideline at the time of the original hit and wearing a ball cap rather than a helmet, Bryant jumped to the defense of Wessel, as did fellow tight end John Raine and guard B.J. Etienne. The trio pushed Bonner off the sideline back into the field of play and continued voicing their displeasure.

“Tempers flared,” said Etienne, who had his helmet ripped off.

As pushing became more physical Bonner started swinging, prompting the ejection of the former “Last Chance U” star, and the group ultimately fell into a pile near the sideline.

Bonner did not speak with the media following the game.

Kiffin agreed with the official’s decision.

“They asked me, ‘Should we eject him?’” Kiffin said. “I said, ‘Yeah, that’s what would happen in the game.’ So learn your lesson so that not only him but nobody else does that in a similar situation.”

It’s unclear whether Bonner will face further punishment from the team, but at least one member of the winning Red team expects some sort of disciplinary action.

“It got chippy, some stuff happened and he got ejected,” Bryant said of Bonner. “We’ll see what happens when he gets to a team meeting, see what coach Kiffin says about it.” 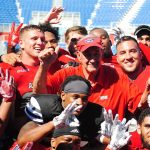 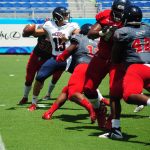